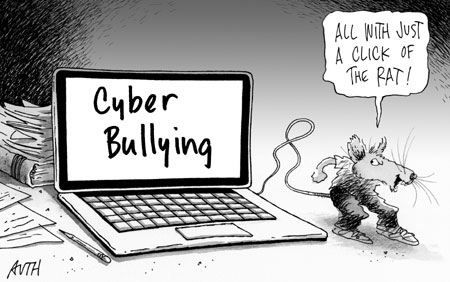 We can all learn from Oprah’s advice to kids and their parents today about how to deal with bullies.

Malignant NarcIssIsts, Wizards, and the Illusions that Mess Up Our Lives

The Wizard of Oz is a perfect metaphor for understanding the terrorists in our own homes.  Abusive people are narcissists.  Some are more malignant (deadly) than others.  Narcissists suck us in with their wizardly illusions.  We are charmed by their promises.  We feel lucky and blessed to be chosen.

Yet, in time, we get hit by the tornado.  We get spun around until we’re not quite sure whether we’re in Kansas or in Oz.  Ultimately, we realize that our hero is actually an insecure wizard hiding behind a curtain.  We also discover it isn’t so easy getting away.  It isn’t as simple as clicking the heels of our magic red slippers.

I was appalled last night to hear the audience at David Letterman’s show laugh and clap as he announced that he had sexually harassed women on his staff.  I’m sure there are details to this story that would stop those audience members cold if the object of his illegal behavior had been their beloved daughters. 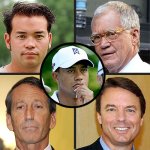 Best and Worst of 2009: Is Tiger Woods the Year’s Biggest Goat?

Tiger Woods is winning People Magazine’s on-line poll for worst cheater of 2009.  He also topped the charts for least respected person of 2009. When Tiger crashed his Escalade in the middle of the night Thanksgiving weekend, most folks accurately guessed his wife Elin Nordegren had caught him cheating.  But, I never dreamed the uproar would be so devastating to his career.  Sports-figures have always gotten a pass when they treated the women in their lives with disrespect and abuse.

Super Bowl to Super Jerk: Roethlisberger, Holmes, Hill, Bernard, Locklear, Etc.
The NFL Players Association made a big deal about joining the Justice Departments “List” of celebrities who pledged to prevent violence against women.  Nobody from the Seattle Seahawks or Pittsburg Steelers was on the list.
Ben Roethlisberger and Santonio Holmes (photo above) won Super Bowl XLIII for the Pittsburg Steelers.   The duo has a history of violence against women.

Charlie Sheen: Serial Abusers with Money & Power
The history of Charlie Sheen’s abuse of women started with Kelly Preston, who is now married to Oprah’s pal John Travolta.  In 1990, Mr. Sheen shot Ms. Preston in the arm.  The wound required stitches.  Both claim it was accidental, but she quickly ended their engagement.  My sense is that Oprah has the inside story.
In 1997, Mr. Sheen pleaded no contest to attacking his girlfriend Brittany Ashland, who claimed she had been knocked unconscious.  He paid a $2,800 fine and got two years probation, 300 hours community service, and court-ordered counseling.

In 2006, Denise Richards obtained a restraining order against Mr. Sheen.

On Christmas Day, 2009, Mr. Sheen was again arrested in Aspen, Colorado on felony charges of second degree assault and menacing with a deadly weapon as well as the misdemeanor charge of criminal mischief against his third wife, Brooke Mueller.  In such cases, the state of Colorado mandates a restraining order.  Mr. Sheen was released on an $8,500 bond.

Mr. Sheen has done two stints in rehab for drug and alcohol abuse.  One was after a drug overdose, and the other after he was arrested for drinking and drug driving according to the BBC.

PAS fathers have just kicked litigation abuse in custody cases up another notch.  Oksana Grigorieva, the mother of one of Mel Gibson’s children, was smart to record evidence of his abuse.  Now, his attorney is trying to squash her like a bug to send a message to other mothers that documenting evidence of abuse can land them in jail for extortion.

Mary Margaret Scharf Farren, 43, is an attorney at the prestigious Skadden, Arps firm in Washington, D.C.  She lives in a 4,300 square foot mansion on a heavily wooded lot with a swimming pool at 388 Wahackme Road in New Canaan, CT.  Their home is worth $4.8  million.

When she married J. Michael Farren, 57, in Washington, D.C. on May 3, 1997, the marriage was reported in the New York Times.  Her husband was at the time a vice president at Xerox.  He had previously served in the cabinet of Pres. George H.W. Bush as Under Secretary of Commerce for International Trade.  He also served under Pres. George W. Bush as White House deputy counsel.

On Monday, January 4, 2010, Ms. Farren served divorce papers on her husband.  He had been emotionally abusive and hit her once three years ago.

On Wednesday, January 6, Ms. Farren attempted to discuss the divorce with her husband.  He wanted to reconcile.  She refused due to his explosive temper.  In typical pit bull fashion, he attempted to murder her in their third-floor master bedroom.

John Michael Farren was arrested for attempted murder, first-degree assault, and first-degree strangulation.  He was placed on suicide watch in the jail’s psychiatric ward.

Did NY Gov. David A. Paterson Intimidate a Woman Allegedly Abused by His Wing Man?

Yet, it appears that behind closed doors Gov. Paterson was doing some intimidating of his own.  David W. Johnson, who is described as the governor’s closest confidant, gatekeeper, and wing man, allegedly brutally beat his live-in girlfriend Sherr-una Booker on Halloween night, 2009.  Although she diligently pursued securing a permanent order of protection, she mysteriously failed to appear in court on February 8 ~ the day after she spoke to Gov. Patterson on the phone.  Her case was dismissed.

Practicing What I Preach, Part 2
Our apartment manager periodically cycles through episodes of abuse. I naively thought this too would pass. But, it didn’t. She’s a bully with power.

I also naively thought I could deal with her on my own.  I asserted my rights under the law.  I tried to fly under her radar by avoiding the office and cabana.  I communicated in writing because it was a shield from verbal abuse, and it created a paper trail.  But, it was my turn to be her target.

I started assembling my “posse.”  This is a new idea adopted from Oprah’s show on bullies.

A “protection circle” of friends and family can take us only so far.  If we’re smart, we’ll know when it is time to bring in  a “posse” of professional people who are trained to deal with bullies, abusive people, and gang members.