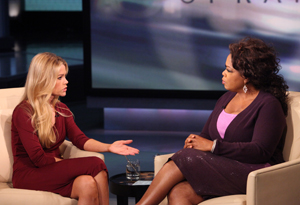 “I was terrified,” was Denise Richards’ frequent response to Oprah’s questions yesterday as she spoke out about the abuse she experienced while married to actor Charlie Sheen.  Oprah observed, then asked:

It must really be bad to leave while pregnant. . .

Do you trust him with the girls? 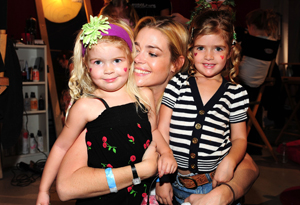 On New Year’s Eve, she and Mr. Sheen had dinner together.  Ms. Richards told Oprah that he was watching the show.  Oprah asked:

I’m sure he doesn’t want me to be too honest.

It’s Complicated is the title of Ms. Richards’ show on the E! network and of Meryl Streep’s latest movie about divorced spouses who remain tethered to each other due to proximity and children.

The history of Charlie Sheen’s abuse of women started with Kelly Preston, who is now married to Oprah’s pal John Travolta.  In 1990, Mr. Sheen shot Ms. Preston in the arm.  The wound required stitches.  Both claim it was accidental, but she quickly ended their engagement.  My sense is that Oprah has the inside story.

In 1997, Mr. Sheen pleaded no contest to attacking his girlfriend Brittany Ashland, who claimed she had been knocked unconscious.  He paid a $2,800 fine and got two years probation, 300 hours community service, and court-ordered counseling.

In 2006, Ms. Richards obtained a restraining order against Mr. Sheen.

On Christmas Day, 2009, Mr. Sheen was again arrested in Aspen, Colorado on felony charges of second degree assault and menacing with a deadly weapon as well as the misdemeanor charge of criminal mischief against his third wife, Brooke Mueller.  In such cases, the state of Colorado mandates a restraining order.  Mr. Sheen was released on an $8,500 bond.

Mr. Sheen has done two stints in rehab for drug and alcohol abuse.  One was after a drug overdose, and the other after he was arrested for drinking and drug driving according to the BBC. 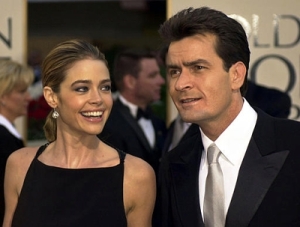 Ms. Richards filed for divorce from Mr. Sheen during March, 2005 while she was pregnant with the couple’s second daughter Lola.  Litigation abuse kept them in court for three years.  On April 21, 2006, Ms. Richards filed a declaration detailing a history of death threats and physical, emotional, and financial abuse.  It will sound familiar to those of us who have been abused by a powerful man:

I was repeatedly talked out of obtaining proper restraining orders from the Court by threats that by my doing so, I would impact the Respondent’s [Mr. Sheen] image and cause others to lose their jobs.  I was torn between protecting myself and my children and the pressure I felt from the Respondent and those around him, who wanted only to protect their own self-serving financial intrests. . .Respondent wants me to remain silent while he uses the legal system to continue to threaten and abuse me. . .

I then became pregnant with our daughter, Sam in 2003. . .Respondent. . .asked me to get an abortion. . .Respondent was furious that the baby was a girl. . .

Respondent threatened me that I “better not tell anybody about his using these drugs and better keep it to myself.”  I understood by these statements that the Respondent would physically harm me and our baby if I told anyone.  I remained silent and scared.

. . .threw an office swivel chair at me. . .tried to stop me from getting into the car. . .pulling and pushing. . .I could not take Sam and that he would have me arrested for kidnaping. . .yanked my keys out of my hand. . .threatening messages with our pediatrician, Dr. Levenstein, because she administered the vaccinations to our daughter. . .Dr. Levenstein then fired us.

The Respondent threatened me to make a statement saying [his $15,000 relationship with prostitute Chloe Jones] was not true.  I refused.  The Respondent replied that if I did not make this statement, he would “destroy me.”

[Note:  During the 1995 trial of “Hollywood Madam” Heidi Fleiss, Ms. Sheen testified that he spent more than $50,000 on prostitutes which he ordered at least 27 times.]

. . .security guards at the house to protect Sam. . .warned me. . .to seek immediate restraining orders. . .

. . .”since you filed for divorce, those are the consequences and you deserve it.”

. . .sex search type sites. . .picture he used for his profile was “his erect penis” which he emailed out to approximately thirty women. . .he should not be around our children. . .I told him that if he continued his lifestyle, this would affect his relationship with the girls.  He became very angry and told me “that this was my last warning” and that if I revealed anything about his lifestyle, “you won’t lay your head down at night.”  I understood this to mean tha the would kill me. . .”this is your last warning; don’t f–k with me.”

. . .I fell on the floor with Lola.  Sam was screaming the entire time and crying. . .he was walking out the front door, said to me that he was going to have me killed.  He said “you are f–king with the wrong guy.” . . .called me all weekend long.  I was afraid for my safety and our children’s safety.

. . .Commissioner Robbins issued restraining orders. . .I continue to be in fear for my safety and the safety of our children. . .on April 9, 2006. . .I told Respondent that I was very concerned about the children spending the night at his house because of the activities he was involved in with prostitutes, gambling, and pornography. . .

I told the Respondent that if the Respondent proceeded with his threats to take me to Court over the children for overnight visitation [he was restricted to supervised visits with a police officer and their nanny present], that I would have to tell the truth about what he had done.  He told me that “I will never get to Court because I will be f–king dead!”  He told me to enjoy my parents “while they are still around.”  I took this to mean that he was not only going to do me harm but also do harm to my parents. . .I believe he has the ability to carry out his threats and do me harm.

History Repeats in Aspen on Christmas 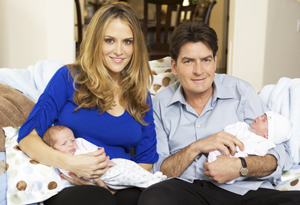 Brooke Mueller, Mr. Sheen’s third wife, is an actress and real estate investor.  The couple have twin boys who were born last March.  According to police reports, Ms. Mueller told Mr. Sheen that she wanted a divorce and expected to get custody of the twins during the wee hours of Christmas morning at their Aspen, Colorado retreat. 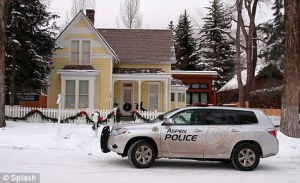 The menancing with a deadly weapon charge against Mr. Sheen for his alleged assault on Ms. Mueller carries a sentence of two to eight years in prison and a fine of $2,000 to $500,000.  So far, CBS is standing by their highly-paid star of Two and a Half Men.  CBS similarly didn’t see an issue with David Letterman’s misogynistic behavior.  Still, the New York Daily News reported that Mr. Sheen is engaging in a smear campagin to discredit Ms. Mueller:

Sheen, 44, claims he was fighting with Mueller about her partying and she went ballistic.

The article quoted an anonymous friend:

Charlie’s team will not let up until Brooke recants.  He has too much to lose.  If convicted of these charges he’ll face prison time.

CNN reported Mr. Sheen straddled his wife on a bed, grabbed her by the neck, held a knife to her throat, and threatened to kill her:

You better be in fear.  If you tell anybody, I’ll kill you ~ your mother’s money means nothing.  I have ex-police I can hire who know how to get the job done and they won’t leave any trace.

Ms. Richards told Oprah that Mr. Sheen called her collect from jail to wish their daughters a Merry Christmas.