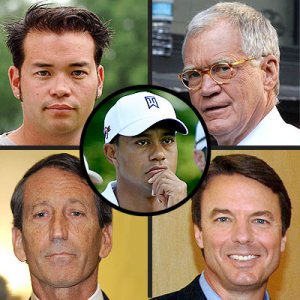 Tiger Woods is winning People Magazine’s on-line poll for worst cheater of 2009.  He also topped the charts for least respected person of 2009.

When Tiger crashed his Escalade in the middle of the night Thanksgiving weekend, most folks accurately guessed his wife Elin Nordegren had caught him cheating.  But, I never dreamed the uproar would be so devastating to his career.  Sports-figures have always gotten a pass when they treated the women in their lives with disrespect and abuse.

In the 1970s, my husband belonged to Medinah Country Club near Chicago.  I heard lots of stories about raunchy tournaments involving nearly nude women.  Wives weren’t allowed at the club on those days.  We plastered smiles on our faces and knew better than to object.

So, I’m not surprised that the golf world is engaging in powerful damage control for their guy with the golden swing.

It started with Chris Brown.  His beating of Rihanna broke down the wall of silence.  She was Glamour Magazine’s cover girl for woman of the year.  The world got educated on why women don’t “just leave.” 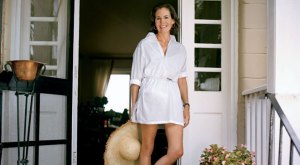 But, Jenny Sanford did not.  Her estranged husband Mark is the South Carolina governor who infamously went “hiking” to Argentina rather than on the Appalachian Trail.  She kicked him to the curb and was featured in Vogue Magazine‘s September issue’s “Notes on a Scandal:”

Her one-page statement. . .was written without the help of spin doctors or media consultants.  It came from her heart and her head.  It mentioned God without making you squirm.  The world took note.  Newsweek dubbed her a “media genius”; The Washington Post hailed her as “a new role model for wronged spouses.”  On television, Diane Sawyer called her classy, praising her “grace in the glare.”

Financial Independence is the Key

Before she married Mark, Jenny Sullivan was a vice president at the prestigious investment banking firm Lazard Freres & Co.  Her ancestors founded the Skil Corporation which makes power tools.  She’s as beautiful as she is brilliant.  Since her financial future isn’t dependent on Mark, she’s able to decide:

. . .it’s up to my husband to do the soul-searching to see if he wants to stay married.  The ball is in his court.

He fumbled.  She filed for divorce.

She liberated a lot of women in affluent households who have been wearing masks to hide the pain of infidelity.  I’m sure many of them have wanted to take a golf club to their own husband’s luxury car.

My own jury is out on this question.  The discovery of infidelity and jealousy certainly triggers domestic violence.  The emotional pain of the betrayal is searing.

The U.S. Justice department’s statistics suggest that about 25% of women are abused.  Group Health’s survey suggests its 44%.  If infidelity gets tossed into the equation, will all women end up being abused sometime in their lifetime?  That’s just too depressing to accept or comprehend.

Leslie Morgan Steiner, the mommy blogger and author of Crazy Love, graduated from Harvard and Wharton’s business school.  She’s using her platform to break down the wall of silence and hold Tiger accountable:

. . .no one ever deserves to be physically attacked by a loved one, no matter the provocation.  Whether you’re pursued with a golf club, a gun or someone’s fists, violence is unacceptable. . .

However, an isolated incident of rage such as Elin Nordegren apparently experienced does NOT constitute domestic violence. . .

This domestic battery accusation, whether a joke or serious, seems to me to be a cover for the real sin here, one that millions have experineced:  male infidelity and society’s judgment (or lack of judgment) towards men who commit it, plus what society considers acceptable reactions by a wife.

Society preaches spousal forgiveness in situations like this.  Especially when the perpetrator is male, wealthy, and admired by the community.  He’s only human, he’s a good provider, what do you expect of a man exposed to such unlimited temptation?  The message to the betrayed wife:  practice absolution and move on for the family’s sake. . .

Infidelity ~ especially repeat incidents when the victim is pregnant and recovering from childbirth ~ IS a form of abuse.  When I was pregnant, I needed my husband’s fidelity more than anyone could have ever imagined. . .I suspect a lot of women share my empathy for how angry she must have been and must still be.

One response to “Best and Worst of 2009: Is Tiger Woods the Year’s Biggest Goat?”