The NFL Players Association made a big deal about joining the Justice Departments “List” of celebrities who pledged to prevent violence against women.  Nobody from the Seattle Seahawks or Pittsburg Steelers was on the list.

Ron Judd, a columnist for the Seattle Times said something yesterday that had me doing a happy dance:

Ben Roethlisberger and Santonio Holmes (photo above) won Super Bowl XLIII for the Pittsburg Steelers.   The duo has a history of violence against women: 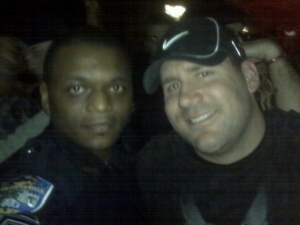 A few hours before Roethlisberger was arrested, he posed for this photo with Sgt. Jerry Blash. . .the same cop who took the co-ed’s police report about the alleged sexual assault.  Sgt. Blash resigned.

Mark Kriegel, a columnist for FOX Sports, went off on the NFL and the Steelers’ “righteous Rooney heirs:”

Hustling sorority girls with tequila?  And that bodyguard escort to the bathroom?  Sorry, but the picture that emerges from all this is that of a sexual bully.  All you bitches, take my shots!  That’s the face of a franchise talking and not just any franchise, but pious Art Rooney’s Steelers.

Roethlisberger’s escapades might not rise to the level of criminal conduct, but beyond any reasonable doubt, they injure the integrity and reputation of the NFL and its Pittsburgh franchise.  What’s more, they are proof ~ again, beyond any doubt ~ of invincible stupidity.  Remember, this is a guy who’s already being sued for alleged sexual assault in Nevada.

Over the weekend, the Steelers traded Santonio Holmes to the Jets. . .

It’s worth noting Roethlisberger’s misdeeds were more widely covered, and therefore, as the league might argue, more injurious to its reputation.  So you can’t help but ask:  Is Holmes that much worse than Roethlisberger?  Or is it just easier to replace a black receiver than a white franchise quarterback?

I’ll concede those aren’t entirely fair questions.  But like the league’s conduct policy, they are rooted in perception.  By the way, whose misdeeds have received more coverage?  Perception is reputation.

Seahawks Give Players a Pass Too

While Ron Judd’s outrage is justified, he doesn’t seem to get excited about Seattle Seahawk players who engage in violence against women.  The team is owned by billionaire Paul Allen, and nobody here in Seattle seems inclined to criticize his penchant for giving players a pass.  The wife of the team’s former coach was a favorite fund-raiser for a local domestic violence shelter, but the team continues to look the other way because the players win games:

Leroy Hill, a linebacker, was on 12 months probation for a Georgia marijuana charge when he was arrested for assaulting his live-in girlfriend on April 10 in Issaquah, WA.  He gets paid $6 million/year for tossing a football around.

Rocky Bernard, a defensive tackle, was arrested two years ago for striking his ex-girlfriend (who is his child’s mother) at the Ibiza Dinner Club during the wee hours of April 21. 2008.  He was suspended for the season-opener by the NFL in 2008.

Sean Locklear, a right tackle, grabbed his girlfriend around the neck outside Belltwon Billiards on January 15, 2006 according to three witnesses.  The NFL waited until after the NFC Championship Game to suspend him.