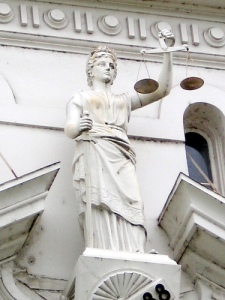 You want justice?  Pack the court room with people wearing purple ribbons.     Vernetta Cockerham and RitaAnita Linger proved this strategy worked in North Carolina.  PETA proved it worked when a couple of punks savagely killed a stray dog.  Sadly, nobody showed up to pack the same judge’s courtroom when a little girl was allegedly raped by her daddy.  Nobody cared about what happened to that little girl until her daddy killed four Lakewood, WA cops.  A teenager in the same county was similarly not protected from her daddy’s abuse.  Nobody cared about what happened to her until her daddy killed a cop and wounded another.  This brave teenager ended up having to protect the cops during a close-range shoot-out with her daddy.

Searching for Justice © 2009, Carole May

Pit bull abusers have lots of Internet help available to them on how to manipulate the legal system as an instrument of abuse.  They quickly learn they’ll go to jail for physicial abuse.  In jail, they learn that they can more brutally ~ and legally ~ hurt a mother by taking away her kids.  In a strategy as old as Adam blaming Eve for the apple, they turn the tables on their victims.  Women fiercely trying to protect their kids from brutal fathers find themselves called prostitutes and addicts and mentally unstable.  Many find their professional careers blackballed by false accusations and innuendos.

Rights for Mothers, however, is a valiant advocate for these women.  Her blog focuses on Parental Alienation Syndrome which all the experts agree is bullshit, but judges around the country keep falling for it.  Why?  They either are abusive behind their own closed doors or they have never been to judicial training to learn about the dynamics of litigation abuse and how to stop it.

Rights for Mothers has been a champion for women like Julie Levine ~ where is the media ~ why don’t they engage in their First Amendment duty to investigate?  It boggles the mind how a judge could find it in the best interest of these kids to be with their brutal fathers rather than with their fiercely protective mothers.

Update:  Shortly after this post, WordPress yielded to pressures exerted by powerful abusive men who were held accountable by Rights for Mothers.  Her blog was “tossed” by WordPress.  But, Nancy will NOT be stopped.  She’s back open for business at  http://rightsformothers.com.  Please be patient while she goes through the arduous process of reloading her vast library of information onto her new site.

Breaking Down the Walls of Silence:  Power of the Sisterhood and the Press

Let’sGetHonest, who has an insider’s knowledge, blows the whistle on “creaming” by non-profit agencies ~ this is why so many women experiencing domestic violence don’t get help from the system.

In August, 2009, O Magazine did extensive investigative journalism into Vernetta Cockerham’s story.  Her story, sadly, is the story of many women experiencing domestic violence.

Denise Richards got justice ~ it took her four very long years.  She was quite fortunate to have the funds to prevail over her ex-husband actor Charlie Sheen, who is a serial pit-bull abuser.  Sandra Boss similarly was able to fund the long fight to hold her ex-husband “Clark Rockefeller” accountable for kidnapping their daughter Snooks.  He’s now serving five years in prison.

Sadly, most women don’t have that kind of money.  These strategies are as old as preachers falsely suggesting Mary Magdalene is a prostitute because she was Jesus’ favorite disciple.

I hope those of you walking in the shoes of these brave women will click on the purple words in this post.  You are most definitely not alone, and the litigation abuse you are experiencing is not unique.  We all need to contribute our own talents to break down the walls of silence and demand justice.  When we band together as sisters, we will all be empowered.  And, we will get justice.  Finally.

Update:  On July 21, 2013, I deleted the shout-out to Claudine Dombrowski from this post.  I have kept silent for years about the corrosive impact of her vicious attacks on effective advocates for protective mothers.  I have been on the receiving end of these vicious attacks, and this is why I rarely write about protective mothers’ issues.  In my opinion, Ms. Drombrowski’s need to be in the spotlight trumps her concern for her daughter as well as substantially undermines real progress by protective mothers.

Hopefully, I have deleted all references to Ms. Drombowski and the AMPP from my blog.  If someone notices one I’ve missed, I hope you will leave a comment to bring it to my attention.