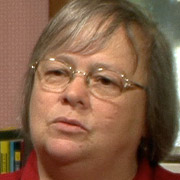 Wynona Ward is an unlikely hero.  She grew up in poverty and abuse in rural West Fairlee, Vermont.  Her alcoholic father first sexually assaulted her when she was three.  He beat her, her mother, and her siblings.  He molested her sisters too.  And, her niece (his granddaughter) when she was three.  The charges were dropped in that case because the toddler was deemed too young to testify.

He passed the attitude that sexually assaulting wee girls was a badge of honor on to his son Richard like bad DNA.  When Richard was arrested in 1991 for following in his father’s footsteps (they raped the same little girl), Ms. Ward broke down her own decades-old wall of silence:

We [Ms. Ward and her sisters] did for her what wasn’t done for the rest of us.  We told her we believed her.

In Richie’s case, he was just living up to his father’s expectations. He was expected to grow up to be a child abuser.  It was like putting a goddamned deer head on the wall.  It was a trophy.

Harold, who was her childhood sweetheart, had no idea his wife had experienced horrendous childhood abuse.  She married him at age 18 to get away from home.  They drove an 18-wheeler over 1 million miles across country hauling everything from groceries to stage productions.

Ms. Ward and her sisters decided it was time for justice.  They secured a conviction against their brother.  When the parole board went for an early prison release, Ms. Ward filed a 15-page report with the parole board and mounted a media campaign to make sure he stayed behind bars:

When she was three years old, she was abused by her grandfather.  When she was six, she was sexually assaulted by her uncle.  When she was nine, she had to testify in court.  Now she’s 12.  What am I supposed to tell her is going to happen to her when she’s 15?

She also went back to school and earned her B.A. from Vermont College in 1995 while riding in the cab of the truck.  She was the first person in her family to graduate from college.

Have Justice ~ Will Travel Is Born

A prosecutor, who had seen her in action, encouraged her to go to law school.  She started law school at age 44 and earned her law degree from Vermont Law School in 1998 while working as a Schweitzer Fellow in the school’s legal clinic.  She was named the 1998 Outstanding Law Student by Who’s Who.  The experience inspired her to create Have Justice ~ Will Travel (HJWT) to serve women experiencing domestic violence in rural Vermont.  She knew their stories.  It was her story too:

I have been where you are, and I have gotten out.  Walk beside me and I will help you get out.

[We] work with these women so they can become strong and independent and self-reliant and be able to support themselves and their children. 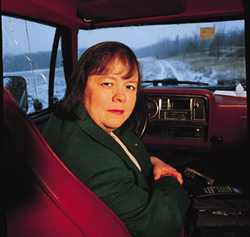 Ms. Ward’s SUVs are her office.  They are equipped with battery-operated equipment that allows her to serve rural clients who frequently have no electricity, phone, drivers license, or car.  They are trapped by fear, isolation, social inequality, and poverty.  Services such as grocery stores, court houses, medical care, and welfare offices are typically 30 to 40 miles away.  These women can’t simply hop on a bus to get someone to help them.  Neighbors turn a deaf ear to domestic violence which is multi-generational:

I dream of the day when no child watches her mother being beaten by her father, when no child needs to cover her ears to block out the screams.

She protects the powerless and empowers them to become independent and self-confident.  Since 1998, HJWT has served over 10,000 clients providing legal representation and social services.  However, Ms. Ward’s limited funding means she turns away 50 prospective clients for each client served.  She tells new legal interns:

You probably traveled some pretty roads to get here [Vershire, VT].  And I bet you passed through gorgeous farmland and idyllic towns.  And you saw beautiful mountains.  Now, let me show you another Vermont ~ one of back roads, trailers, and tarpaper shacks.

Stubborn Refusal to Feel Sorry for Herself

Unlike their husbands, her clients are unable to afford an attorney to help them navigate legal minefields.  These batterers control the keys to the family car:

The legal system is really hard on victims.  They get victimized again and again.

If they lose, they have to go back home, and their lives can become even worse.  It’s really not fair.  It’s not just.

When these women get away from the abuse, they just bloom.  They become assured, confident, and want to help other people.

What keeps her going?  She told CNN:

I think about my mom sitting at our kitchen table, trying to figure out how to make the last 10 cents last to feed us all.

She wishes there had been a HJWT to tell her mother:

Ms. Ward is a Schweitzer Fellow, an Ashoka Fellow, and an Equal Justice Works Fellow.  In 2009, the American Bar Association’s Delivery of Legal Services section honored her with an award for Bringing Legal Services to Domestic Violence Victims.  She is the first CNN Hero of 2010.  Hosted by Anderson Cooper, CNN Heroes was launched in 2007 to spotlight everyday citizens changing the world.

She has been featured in Ms. Magazine and was named in 2009 as one of the women changing the world by Women’s Day.  Her story was told on PBS in 2002 as part of a series on 12 local heroes which became the book Your America.  The book tells the stories of 12 ordinary citizens who fought for change and successfully made a difference.  Each found a route to change built around action.