life gave me lemons and I had to make pink lemonade.

Christy Salters Martin, 42, is on a quest to the be the “Million Dollar Baby” of women’s boxing.  She was a private investigator in college and owns two guns including a pink 9-millimeter Glock.  She is the reigning World Boxing Council super-welterweight champion with 49 wins.

Her trainer/estranged husband James is a frail 67 year-old man with diabetes.  He spent two weeks in a coma last year after open heart surgery.

Prosecutors allege that for over an hour on November 23, 2010, Mr. Martin brutally beat, pistol-whipped, stabbed, and shot Ms. Martin in the back with her pink Glock.  He was arrested for attempted first degree murder in Orange County, Florida.  Apparently, he was enraged that she was leaving him for a Sherry Jo Lusk.  Mr. Martin also threatened to destroy her career.

If I hadn’t read this story in Sunday’s New York Times, I would have thought it too improbable to be true.  The Orlando Sentinel summed it up:

The irony here is sobering: A woman who fights for a living is a victim of domestic violence.

But, there it was on the front page of the New York Times Sunday Styles section:  “Another Shot:  A stabbing, allegedly by her husband, almost cost Christy Martin her life.  Now, it may have given the boxer her career back.” 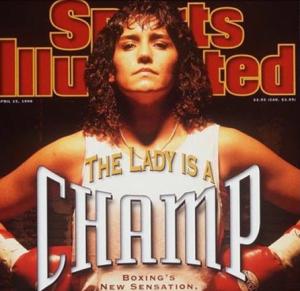 Boxing is my life.

Ms. Martin is the daughter and granddaughter of West Virginia coal miners.  Her grandfathers have black lung disease, and her brother is a disabled miner.  She got hooked on boxing during college:

. . .The adrenaline rush from actually knocking somebody out is probably the best drug in the world.  And then the crowd going crazy and not believing they saw this woman, with one punch, knock another woman out.

A promoter sent her to Tennesee in 1990 to train with her future husband.  The couple married in 1992.  Pink became her trademark color, and Don King became her promoter.  She put women’s boxing on the map.  In 1996, she graced the cover of Sports Illustrated.  She won 49 fights before her career stalled after a “Million Dollar Baby” fight was cancelled.

Before she had completely recovered from the injuries allegedly inflicted by Mr. Martin ~ she still had a bullet in her back ~ she went back into training and hired a posse of celebrity promoters including Gloria Allred.  Boxing promoters Bob Arum and Don King scheduled what they hope will be her 50th victory against Dakota Stone on March 12 in Las Vegas.  She told the New York Times:

You know I was a figher before, so I’m just going back to work, and through my work maybe I can inspire other women, or give them strength to deal with situations and move forward.

God blessed me.  That’s why I’m alive.  There’s a bigger plan for me than just getting back to boxing.  Through boxing, I’ll be able to help other people in tough life situations.

. . .The 50 wins have slid a little bit to the wayside.  Just showing myself and the world that with God’s blessing and a strong will, you can get up and regain the will in your life.  That’s what I see more important than the 50th win.