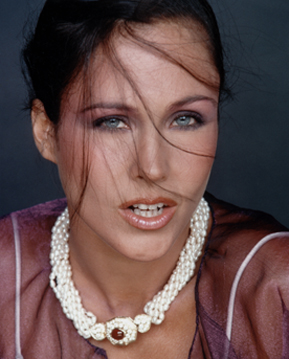 When L’Oreal wanted to tell women “I’m worth it,” they selected Erin Gray to deliver the message.  She was also the face of Virginia Slim’s “we’ve come a long way, baby” campaign.  She’s still delivering these messages for many domestic violence organizations including Haven House and the National Coalition to End Domestic Violence.

My passion is to promote health and wellness.
– Erin Gray
“Breaking the Cycle:  A Personal Perspective on Domestic Violence” is one of the many motivational speeches that she delivers.  She launched Heroes for Hire, a speakers’ bureau.

My approach to health is that of a balancing act ~
the balancing of the mind, the spirit, and the body.
– Erin Gray

Ms. Gray played Kate Summers, the woman who had it all (marriage, family, career) on Silver Spoons.  Her portrayal of Colonel Wilma Deering (beauty with brains) in Buck Rogers in the 25th Century made her a comic book cult icon.  It didn’t hurt that she’d been one of the Sports Illustrated swimsuit models.

Tai chi is a moving meditation which is also a healing art, and a martial art.
. . .the cornerstone for keeping myself physically strong.
– Erin Gray

Path to Wellness and Empowerment

Ms. Gray witnessed her mother’s abuse and experienced sexual molestation and abuse as a child; and she experienced emotional abuse in her first marriage.  After it ended, she lost six members of her small family.  She went on a spiritual journey along a diverse, unstructured path.  She investigated exercise techniques, philosophy, and psychology:

I’m somewhat of an orphan except for the family I’ve created. . .Every six months somebody would pass away.  I had a very small family. . .difficult to lose my mom and dad. . .going through a divorce. . .teenage son. . .It was rough. . .you get through it. . .

I feel like I cleaned out the forest and got rid of the dead wood and trimmed the trees and now my forest or garden or whatever is ready to have a regrowth. . .feeling strong physically and mentally.

I know first hand what it is to be a child living in fear and how
it damages the soul and damages the spirit.
I was both physically and sexually abused as a child.
– Erin Gray

She told her story at the Hubbard House memorial breakfast in 2006:

The affectionate hugs [from her stepfather] turned to sexual abuse.  The girl now lives in silent rage.  Until one day she picks up a knife and says, “if you ever touch me again, I’ll kill you.”  That child, that woman, of course, is me.

Therapy failed, but she found help for the emotional issues at Haven House:

People don’t know about the conditioning of abuse, the development deficits that result.  The biggest question is “why doesn’t she leave?”  They don’t understand the traps that are self-imposed.

She told the 800 people in the audience about the symptoms of abuse:

She closed by asking the audience to be what Alice Miller calls an enlightened witness:

It takes somebody in the society to say, “there is something wrong here.”

CNN Joy Behar Interview:  “Why Battered Women Stay”
In 2009, Ms. Gray was part of a panel of abuse survivors who appeared on Larry King Live with guest host Joy Behar.  Ken Schwartz, a Vietnam veteran with PTSD, was Ms. Gray’s first husband.  They were high school sweethearts.  Ms. Gray talked about dealing with the emotional abuse triggered by PTSD episodes:
He had come back from Vietnam. . .I woke up in the middle of the night and witnessed him killing an imaginary person in our bed. . .I went, oh, he is not the boy I knew in high school.  Something’s wrong. . .
I wanted to take care of him.  I wanted to love him.  I thought love would solve everything. . .
I thought, I’m strong.  I can do this. . .he is a good person.
Ms. Behar asked whether it is harder to walk out on emotional abuse.  Ms. Gray responded:
I think if he had hit me, I would have been out in a second. . .
He would re-trigger my having been abused as a child. . .muted senses. . .a form of amnesia. . .so painful that you can’t feel it.  If you felt it, you would dissolve into 1,000 pieces. . .as a child to protect yourself.  You shut down. . .feel myself not be there. . .no voice. . .I didn’t know how to defend myself verbally or protect myself. 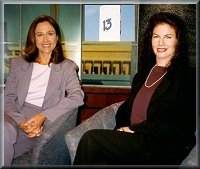 We need to educate the public as to how to help people to get out of abusive situations, to recognize what a negative situation is, to help women not to make the wrong choices with men, to create self esteem within every individual and particularly every child. 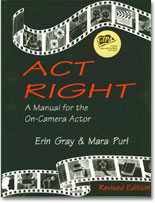 Freedom is the will to be responsible for ourselves.
– Nietzche
The partners also wrote Act Right:  A Manual for the On-Camera Actor together.  Ms. Purl was on Days of Our Lives and writes the Milford-Haven series.

Ms. Gray is married to photographer Richard Hissong.  The couple met on the set of Silver Spoons.   They work together to produce Chi Kung and Tai Chi videos.