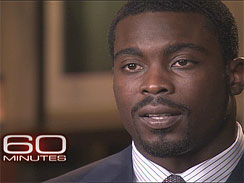 Michael Vick was on 60 Minutes last night as part of his obligatory “mea culpa” media blitz.  Is he sincere?  He did the time.  He said it cost him $135 million.  He said he was the person to blame.

I get as rabid as the next person when it comes to animal abuse.  But, I want to know why the authorities aren’t equally vigilant in prosecuting NFL stars who abuse the women in their lives.

Each year at least one of the Seattle Seahawks seems to forget the woman in his life isn’t a linebacker.  He mistakes his bedroom for a football field.  I’m sure the same is true in every major city with an NFL franchise.

Year after year, the dance is the same.  The player hits his woman.  The story is reported by the press.  The check gets written to one of our prominent domestic violence shelters where a former coach’s wife was on the board of directors.  The story goes away.  What happens to the woman?  She’s on her own.

OJ Simpson infamously escaped criminal culpability for the murders of Nicole Brown Simpson and Ron Goldman.  The Goldman family is still trying to collect on the damages they were awarded in the civil trial.  Where is the NFL in making sure he pays up?

Michael Vick served all but two months of his 24 month sentence.  But, men like John Perry and Thomas Howard Price, Jr., who were convicted of attempted murder of their wives, got early release.  Prison authorities didn’t seem to care that Barbara Bentley and Heather Thompson were in mortal danger.  Nancy P. Tyler’s ex-husband Richard Jay Shenkman has yet to stand trial for allegedly burning down her house in 2007.  His billionaire brother keeps bailing him out of jail.  This summer Richard allegedly burned down another of Nancy’s homes after holding her hostage for 13 hours.  Her neighbors are incensed that the burned rubble of her former house is unpleasant.  Vernetta Cockerham’s estranged husband Richard Ellerbee was never arrested even though the cops witnessed him violating her protection order.

Where’s the public outrage for these women and the Goldman family?  Where is the Humane Society and PETA?  They both blasted Michael Vick, but the Humane Society rolled over when they realized he’d make an excellent spokesperson for their cause.

Little boys are getting the message that they should be nice to their dogs, but who within the NFL is telling them they need to be nice to girls too?

Michael Vick’s felony conviction means he can’t rent an apartment where I live.  It means most corporations wouldn’t hire him. . .except the NFL which one blogger opined:

. . .is lousy with felons, one more won’t hurt?  No.  (Though, in fact, the NFL has quite a few convicted felons, which is kind of weird in a profession that makes its players sign a code of conduct.)

She went on to bash PETA:

. . .an animal-rights group known for its rabid defense of animals.  (Though, for some reason, it has no problem objectifying female humans through its naked campaigns. . .)

This year when an NFL player mistakes the woman in his life for a linebacker and his bedroom for a football field, I hope the Humane Society and PETA both remember that technically women are animals too.

3 responses to “Michael Vick & the NFL: He paid the price for abusing dogs, but NFL stars who abuse women get a pass.”