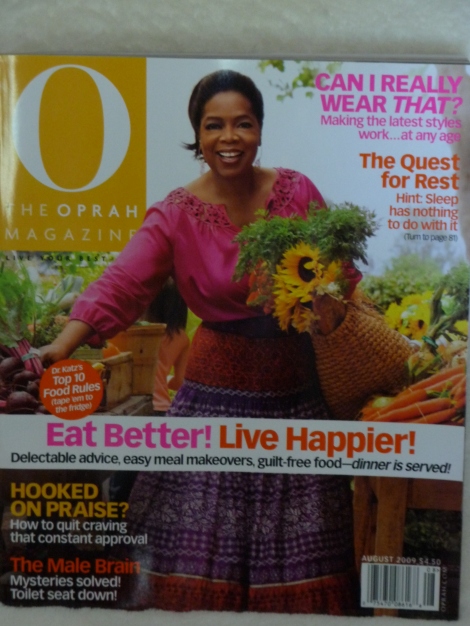 Kudos to Oprah and O Magazine for funding investigative journalist Phoebe Zerwick’s well-researched article about Vernetta Cockerham:  “Why Didn’t They Stop Him?”

Vernetta Cockerham did everything by the book. . .Why aren’t the laws against domestic violence enforced?

Good questions.  I think most women who experience domestic violence would like to know the answers.  As I read and digested the article, I realized that Vernetta’s story is all our stories.  We are conditioned by the system to believe we’re the only ones who think the system doesn’t work.  The truth is that it doesn’t work for most of us.  “Fell through the cracks,” is a phrase that sets my teeth on edge.  Callous indifference is more accurate.

Did you know that advertisers pressure magazines to not write about domestic violence?  Serious.  They don’t want our sad stories to cast a shadow over their products.  Excuse me?  Do they not realize we’re their consumers?  You’ll notice that Vernetta’s story didn’t make the cover.  While her photo is featured in the table of contents, you’ll notice the story is buried at the back of the magazine. 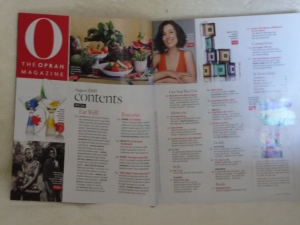 I want everyone who reads or hears about Vernetta’s story to buy the August issue of O Magazine.  Buy it for yourself.  Buy it for your friends and family and clergy and local domestic violence shelters.  We need to send advertisers and publishers a message that this is an issue that deserves serious investigative journalism.  And, we need to encourage Oprah to dig deeper.  We need for her and her staff to understand and appreciate that Vernetta’s story is the norm rather than the exception.

If buying a copy of the magazine is something you absolutely can’t afford, you can read the story on-line by clicking here.  And, you can read the update on Vernetta’s settlement by clicking here.  While you are at O Magazine’s web site, please click here to thank the editors for publishing this story and to encourage them to do more investigative journalism to protect women and children from abuse. 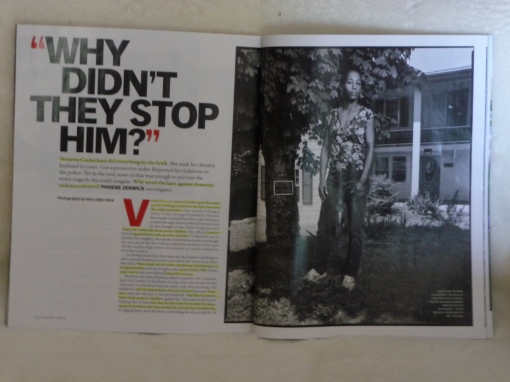 The article opens with a photo of Vernetta standing in front of the farmhouse her family owned for generations.   The photo captures her essence. Her 17-year-0ld daughter Candice was murdered in the home by Vernetta’s estranged husband Richard Ellerbee.  He brutally stabbed and beat Vernetta and sent her on a journey to hell and back.  Sadly, Vernetta lost the farmhouse in foreclosure because she was barely subsisting on $800 in monthly Social Security benefits.  But, Vernetta persevered to fight the system that had betrayed her.  Her grandmother Marie Edmonds (see their photo below) had instilled in her strength of character, dignity, and faith. 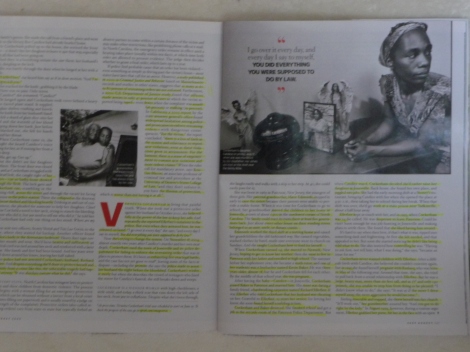 As you can see, I highlighted the article extensively.  I was stunned to learn research proves:

Ms. Zerwick quoted the conclusion of a 2005 report by the California attorney general’s office:

In essence, “the illusion of protection. . .is worse than not having it at all.”  Vernetta had worked for a police department and a state prison.  She had faith in the system.  She’s now out to change the system that let her down horridly.  Her first attorney Loretta Biggs summed it up:

I think she was perceived as not being worthy of protection. 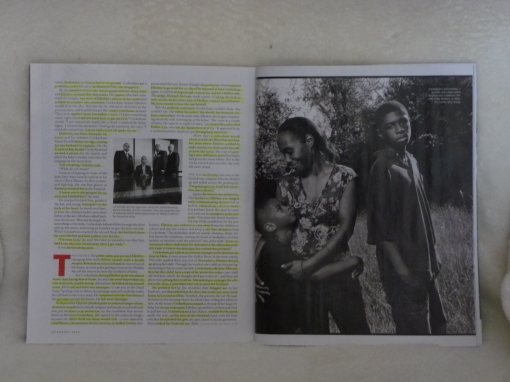 Despite repeated threats, harassment, stalking, and intimidation, Richard Ellerbee was rarely arrested. . .even after the police witnessed him violating Vernetta’s protection order.  His bond was consistently set at a low amount.  He spent very little time in jail.  And, he was not sent back to jail when he violated the terms of his probation. . .despite the fact that his own probation officer wanted him back behind bars.

Ms. Zerwick interviewed a more enlightened judge in Louisville, Kentucky where domestic violence cases are heard by the same judge with assistance from social workers until the case is resolved.  In his 13 years in DV court, Jefferson County circuit court judge Jerry J. Bowles has protected victims from harm.  Het gets it:

There’s only one reason we threaten people.  We want them to think we have the ability to hurt them if they don’t do what we want.

Sadly, in most of the country, batterers prevail:

Police often react. . .isolated incident. . .when it is the accumulation of small abusive acts. . .wears a woman down and emboldens the batterer. . .rarely spends time in jail. . .most calculating batterers figure out how to manipulate the system to their advantage ~ filing charges against their spouse, or reporting her to social workers, knowing that the threat of losing her children is more chilling than any beating. . .abusers often appear calm, while the victim is hysterical.  Often she ends up being the one blamed.

And, I was disappointed to learn that the U.S. Supreme Court doesn’t get it either.  Ms. Zerwick included a report on Castel Rock v. Gonzales which was written by Justice Antonin Scalia (his abuse of power from the bench makes me wonder what happens behind the closed doors of his home).  Essentially, Justice Scalia doesn’t see any reason police should be mandated to enforce protection orders.  He needs to spend some time in school with Marcus Bruning in Minnesota who trains police officers on how to recognize abuse:

When a woman repeatedly returns home to her batterer, that is a sign of his power and control.

This is why women don’t leave, Oprah.

I hope you will continue to shine a bright light on the dysfunction of a system that is supposed to protect women and children but too often protects men who batter.  We need and deserve better solutions.

14 responses to “Vernetta in O Magazine: Does Oprah Finally Get It?”