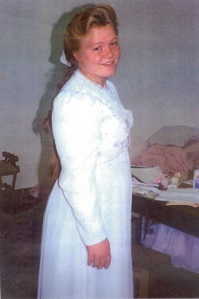 Elissa Wall on her wedding day

FLDS leader Warren Jeff’s trial started today in San Angelo, Texas.  The San Angelo Standard-Times reports he is being tried on two counts of sexual assault of a child.  It appears his attorneys are using every possible legal maneuver to avoid a trial.  The charges stem largely from the raid on the YFZ Ranch as well as charges made by Elissa Wall in her book Stolen Innocence:  My Story of Growing Up in a Polygamous Sect, Becoming a Teenage Bride, and Breaking Free of Warren Jeffs. 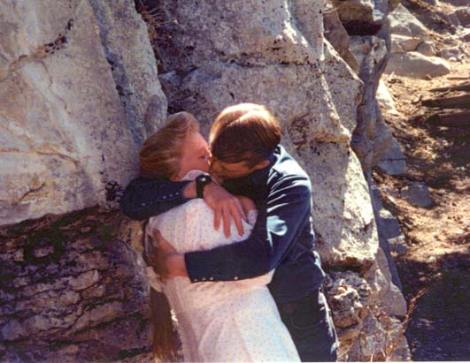 I was repulsed by him.
He hadn’t even held my hand, but
he had already taken my innocence.
– Elissa Wall

“Keep Sweet” and Marry Your Cousin

When she was just fourteen years old, Elissa Wall was ordered by prophet Rulon Jeffs to marry her nineteen-year-old first cousin Allen Glade Steed on April 23, 2001.  She loathed him.  Her sisters Rachel and Kassandra were teenagers when they were forced to marry the prophet who was an infirm man in his eighties.  They were members of the Fundamentalist Church of Latter Day Saints (FLDS) which practices polygamy:

Marriage wasn’t about God, or the prophet, or any of that.  It was about controlling women, trapping them into believing that they didn’t have any other options. . .Mom had been secretly pulled aside and told that it was her responsibility to make sure that the marriage took place. . . “or else.”

. . .many aspects of the religion are based on revoking the rights of women.  If a girl speaks her mind, get her married.  Once she’s married, get her pregnant.  Once she has children, she’s in for life ~ it’s almost impossible for any FLDS woman to take her children if she leaves, and no mother wants to leave her children behind. . .I was still too young and blind to see the pattern. . .enormous sense of entrapment. . .walls closing in around me. . .the bridle had been cinched tight and heaven would be my hell. . .My soul was broken. 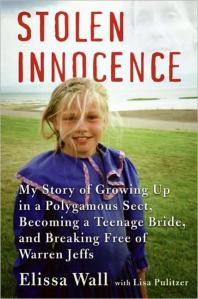 As a naïve fourteen-year-old girl,
I had no idea that people did more than sleep in bed.
I knew nothing about sex.
– Elissa Wall

On her honeymoon, Elissa’s predominate wish was to finish ninth grade.  After Allen raped her, she took two bottles of pills in a failed suicide attempt.  He continued to rape her.  Warren Jeffs ordered:

You need to go and repent.  You are not living up to your vows.  You are not being obedient and submissive to your priesthood head [husband].  And that is your problem.

You need to go home and repent and give yourself mind, body, and soul to Allen. . .obey him without question because he knows what’s best for you.

Elissa’s first pregnancy ended in miscarriage.  Allen was abusive and controlling.  His first anniversary gift was to have her arrested and delivered to him as a joke:

Our first anniversary marked a turning point for me. . .Any illusion that I had used to convince myself that it was going to work out was shattered, and all the bottled-up heartache. . .came rushing to the surface.

. . .I knew that you don’t hurt people that you love. . .he viewed me not as a partner and equal, but as a possession. . .no man, woman, or child should be anyone’s chattel and be robbed of their God-given free will.

Elissa had a second miscarriage and a stillbirth.  The sexual, physical, and emotional abuse continued.  She took a vacation to visit her brother and sister in Oregon and lived in the desert in her truck.  In the midst of her third miscarriage, she met Lamont Barlow, who attempted to be a Good Samaritan.  She didn’t trust him, but he didn’t give up:

Lamont turned up at Mark Twain’s [where she worked] several more times that week. . .Lamont had begun to ask questions about me. . .why I had a black eye.  It infuriated him to think that someone would strike a woman.

Lamont left the FLDS.  Elissa felt safe with him because he loved her.  After she became pregnant with Lamont’s child, she was released from her marriage to Allen:

I was making this choice to leave. . .for our child. . .so that our child. . .could grow up in. . .a world where God and faith are instruments of hope, not tools of manipulation.  I was making the choice that my mother had been unable to make for me and my siblings.  I was choosing to give my child the power of choice.

Getting out wasn’t just about starting a fresh routine, it was about establishing a totally new way of thinking.  When you leave the FLDS, your whole foundation crumbles.  You have to start from scratch. . .We had gained freedom and each other, but we had lost the ground beneath our feet. . .I wanted to believe God loved me. 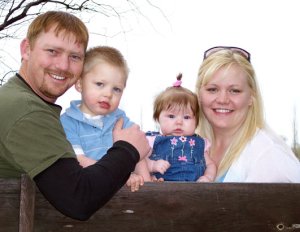 On February 18, 2005 their son Tyler was born.  People who had left the FLDS ~ willingly and unwillingly ~ began to gather to take legal action against Warren Jeffs.  Elissa wasn’t thrilled about coming forward as the key witness:

People, girls, were still being put in my position, and I needed to stand up and make it right.  To fight for those who still hadn’t found their voice. . .Those girls were my purpose.  I knew I had the strength. . .

Mr. Jeffs became a fugitive and was added to the FBI’s most wanted list with a $10,000 reward on his head.  He was captured in Nevada, and the case against him created quite a buzz in Utah.  A jury found Mr. Jeffs guilty.

Elissa and Lamont’s daughter Emily was born in December, 2006.

The pattern of punishment of FLDS members who do not submit continues.  Mr. Jeffs will be spending a great deal of time in court defending himself and the FLDS Church against a myriad of criminal charges.

Stolen Innocence does an excellent job of exposing how religion has been twisted and perverted to commit criminal acts.

Carolyn Jessop:  Safety in the Spotlight