Crystal Judson Brame with her children Haley and David, Jr.

Where do you go? Who do you call when the domestic violence perpetrator in your life is the chief of police? This was Crystal Judson Brame’s dilemma 10 years ago today.  Mrs. Brame was a protective mother who did everything she knew how to do ~ she called all the people being paid to protect her.  They didn’t.  Instead, they sought to curry favor with her abusive husband, David Brame, who was chief of police in Tacoma, WA:

The shooting came one day after city officials publicly announced that Crystal’s claims of abuse and threats would not be investigated because it was a “private matter.”

Crystal Judson Brame is why I do what I do.  Ten years after the fateful day when her husband lured her to a parking lot in Gig Harbor, WA and shot her and then himself in front of their kids, this story still causes tears of rage and sorrow.  I pray that their kids Haley and David, Jr. are doing well.

Crystal, I’m going to do whatever I can
to make sure this doesn’t ever, ever, ever
happen to anyone again.
– Lane Judson
Lane Judson has kept the promise he made to his daughter while she was fighting for her life at Harborview in Seattle, WA.  The Crystal Judson Brame Domestic Violence Protocol Program was passed by Congress in 2005.  It provides federal funding for law enforcement agencies to implement domestic violence policies and training.  I admire and respect Mr. Judson tremendously for the work he has done:

He started a new career, and remade himself into a crusader. To anyone who will listen, he speaks about police officer-involved domestic violence and the need for law enforcement agencies to adopt policies to prevent it.

He speaks to groups large and small, to people high and low. He’s written to governors, attorneys general, presidential candidates and members of Congress. He’s visited Florida, Illinois, Wisconsin, Idaho and New York, among other places. He’s spoken to law-enforcement agencies in Great Britain. He answers distraught emails from across the country. 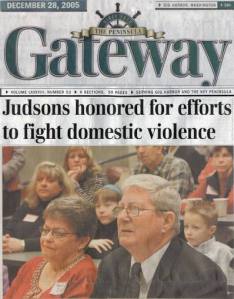 Stacy Mulick, a Tacoma News-Tribune reporter, keeps a status report on “Promises made, some promises kept.”  It is chilling to read how resistant many people ~ including the folks who run the Crystal Judson Family Justice Center ~ are to fulfilling promises made to the Judson family.  The promises were part of a settlement in a lawsuit against the city.  The Judson’s wanted the plaque honoring Crystal’s memory to say:

The Family Justice Center is dedicated to the memory of Crystal Judson and other victims of domestic violence. Crystal Judson was fatally shot on April 26, 2003, by her estranged husband, the Chief of Police of Tacoma.

Crystal Judson Family Justice Center — Dedicated to the memory of Crystal Judson — May all who walk through these doors find strength, courage, and hope.

The promise to dedicate a page on the Center’s website to Crystal’s story was similarly not kept.  Instead, there is this brief mention:

The center is named in honor of Crystal Judson Brame. Crystal was murdered in 2003 by her husband, then Tacoma Police Department Chief of Police David Brame, who also took his own life.

The News-Tribune has maintained a web page devoted to the story for ten years.  Although I shine my own bright spotlight on Pierce County, I was shocked to read a 2011 assessment of domestic violence in Pierce County:

The domestic violence-related offenses rate in Pierce County and Tacoma are among the highest in the state, and the rate of DV related fatalities in Pierce County far exceeds comparable counties.

We estimated that around 10,000 households in the county are affected by domestic violence in any given year.

This is why I will continue to shine a bright light on Pierce County, WA.  It haunts me every day that I had no way to contact Mrs. Brame and share my survival strategies with her.  I know this is true of many survivors who saw Chief Brame on the news on April 24, 2003.  May God bless the Judson family and bring them peace.

Remembering Crystal:  Life’s Lessons on Escaping the Abuse of a Powerful Man