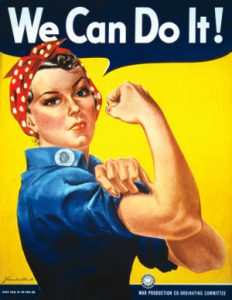 Rosie the Riveter has been a feminist icon since World War II.  Naomi Parker Fraley, the woman credited with being the inspiration for the poster, died in Longview, Washington on January 20, 2018.  She bought her infamous bandanna at a dime store, and a photo of her modeling safety attire has been linked to the poster created by J. Howard Miller to boost morale at Westinghouse.

On March 24, 1942, UPI went to the Alameda Naval Air Station in California to do a story on proper safety attire for women working in wartime factories.  The caption said:

Pretty Naomi Parker is as easy to look at as overtime pay on the week’s check. And she’s a good example of an old contention that glamor is what goes into the clothes, and not the clothes. Pre-war fashion frills are only a discord in war-time clothing for women. Naomi wears [low] heavy shoes, black suit, [no jewelry] and a turban to keep her hair out of harm’s way (we mean the machine, you dope).

Rosie was all of us.
Everyone was excited to work for the country,
and we all held up a hand and said
“we can do it!”
– Naomi Parker Fraley
The poster does capture the spirit of the millions of women who worked during World War II, and it is likely that Rosie is a composite of many of those women.  Yet, Mrs. Fraley invested considerable energy late in life to prove that she was the inspiration.
Advertisement