Her ex-husband Edwin Post had humiliated her with his emotional abuse and debauchery.  When his infidelity hit the front pages of New York’s newspapers, Mrs. Post sought revenge.  She never forgave him.  In “Fundamentals of Good Behavior,” Mrs. Post opined:

Far more important than any mere dictum of eitquette is the fundamental code of honor, without strict observance of which no man, no matter how “polished,” can be considered a gentleman. . .The man who publicly besmirches his wife’s name, besmirches still more his own, and proves that he is not, was not, and never will be, a gentleman.

Clever lady!  She made it official:  a man who is abusive and/or cheats on his lady love is a jerk-wad.  Eitquette in a nutshell.

Emily Bruce Price was born on October 27, 1872, into high East Coast society at the height of the Victorian era and grew up during the Gilded Age.  Her parents taught her to shun the pretentious:  quality had nothing to do with money or birth.  A lady treats the kitchen maid with as much courtesy as a visiting duke.  Respect was due to anyone who did a good job.

Miss Price made her debut in 1889.  On June 1, 1892, she married married Edwin Main Post.  The bride designed her wedding dress.  The couple had little in common.  He loved to sail and play bridge.  She hated both.  She loved the arts, he was indifferent.  Her family was frugal.  His was perpetually in financial ruin. 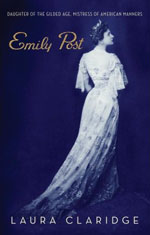 Emily had the instincts of a survivor who

intuitively knows what to do.

[Edwin’s] feelings for her were based mostly on pride of possession; he had no interest in the actual contents of the elegant package.

. . .They had no intimate or truly companionate life together.

Their son Edwin Main Post Jr. was born on June 2, 1893 ~ the day after their first wedding anniversary.  Their second son Bruce Price Post was born on February 9, 1895.

People are drawn to others who seem happy.

As their marriage crumbled, Mrs. Post turned to writing fiction:

. . .she was writing to save her marriage.  If she rewrote and revised often enough, she knew she could make it all come out right.

But in Emily’s real world, she didn’t get to choose the ending.

Prophetically, she wrote in Flight of a Moth, her first novel:

The eleventh commandment, “Thou shalt not be found out,” is despicable but nevertheless is the one thing you cannot get away from.

Her husband’s infidelities were splashed across the front pages of New York newspapers.  They divorced in 1906.  Mrs. Post supported herself through her writing, interior decorating, and building models of architects’ buildings.  She received a substantial legacy after her mother’s death in 1909.

Good manners open many doors that

“Why don’t you compose a book on how to behave?”

After World War I and during Prohibition, Vanity Fair editor Frank Crowninshield suggested Mrs. Post write a book about etiquette.    Her first book on the subject was published in July, 1922.  It cost $4.  Her target market was immigrants, war veterans, and the middle class.  Her “little blue book” became a best seller.  In it, she wrote:

Best society is not a fellowship, nor does it seek to exclude those who are not of exalted birth, but it is an association of gentle-folk [in which] charm of manner. . .and instinctive consideration for the feelings of others are the credentials by which society the world over recognizes its chosen members.

. . .Manners are made up of trivialities of deportment which can be easily learned if one does not happen to know them; manner is personality—the outward manifestation of one’s innate character and attitude toward life.

“Telling people what fork to use held no interest for her.”

Emily Post. . .would maintain that no error of etiquette could ever match that of the cruel arbiters of society, those “real outcasts,” who acted unkindly with “inexcusable” crudeness and attracted attention to someone’s shortcoming whenever they had the chance. . .

The theme of appearance versus essence, the superficial versus the signficant, recurs throughout Etiquette. . .a “plain girl” becomes stunning when she glows with joy. . .pity those unlucky brides marrying against their will. . .the way people treated others was more important than an address or last name. . .she. . .defined “good breeding” or “class” as an external sign of people with good character. . .the way to distinguish between a “woman of breeding and the woman merely of wealth” was to observe the way she spoke to her servants.

Treating respectfully those with less power or position than oneself remained central to the message of Etiquette. . .central commandment to put others at their ease. . .People and their feelings always came first.

To wittingly cause distress to others was, to Emily, the antithesis of good manners. . .All affectations are bad form. . .Emily was deeply offended by the pretentious and the pompous.

. . .women were capable of being valuable lifetime partners, but men. . .arrogantly prevented them from contributing their expertise to the marriage or to the larger world outside. . .the social system was set up to overvalue one sex at the expense of the other.

A person’s speech. . .was a ticket into society ~ or an excuse for exclusion. . .titanic difference between deliberate slang and ignorant speech.

In addition to writing, Mrs. Post was an avid gardener.  She escaped into jig-saw puzzles.  She developed a co-op apartment building at 39 East 79th Street at Madison Avenue, moved into 9B, and invited her society friends to be her neighbors.  Sunday afternoons were reserved for her grandson William Goadby Post.

She believed in physical and fiscal fitness.  She had a great sense of humor.  After elderly Mrs. Post’s panties fell off in Manhattan, she joked to a reporter that she had “dropped her drawers on Broadway.”  It was a reference to her life-long dream to become an actress.

She passed away on September 25, 1960 in her co-op apartment.  Ms. Claridge summed up her life:

Emily Post was not alone in maintaining that the art of treating people well is the other side to the act of waging war.

Note:  The table setting photos are from the first edition of Etiquette.

2 responses to “Emily Post: Why did she become etiquette’s leading expert?”