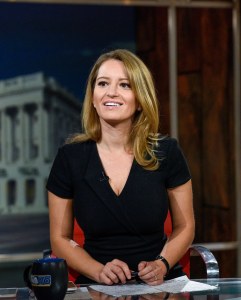 Katy Tur was living the lush life in London and working as a foreign correspondent for NBC.  She was in love with Benoît, who lived in Paris.  They were planning a romantic vacation to Sicily when NBC called her back to New York for a Make-A-Wish assignment.  While she was in New York, Donald Trump announced his bid for the White House.  NBC needed somebody to cover the fire and fury which erupted.

The assignment morphed into a temporary campaign gig which culminated in a new career as a political journalist and her own show on MSNBC.  Bye-bye, Benoît.  Hello, presidential campaign grind.  The upside is that she met Tony Dokoupil in the make-up room at NBC.  Sparks flew.  She camped out in his 400 square foot apartment in New York during the campaign, he went to work for CBS, and they married on October 27, 2017 in Utah.  She hints at their romance in her book Unbelievable: My Front-Row Seat to the Craziest Campaign in American History.

The book is a series of flashbacks between election night in 2016 and the campaign with fleeting glimpses into her personal life.  In Fire and Fury, Michael Wolff brilliantly described the distinction between seduction and sexual harassment. In a nutshell, women respond positively to a man who is gifted in the art of seduction IF they are attracted to him.  If he’s not skilled and they don’t find him attractive, it is harassment.  Mr. Wolff believes that Donald Trump is a bit of both:  seducer and harasser.  Sadly, he’s also oblivious when he crosses the line.

While Ms. Tur never explicitly says that Donald Trump sexually harassed her on the campaign trail, she vividly described an incident in December 2015:

For the past two weeks, the Republican presidential front-runner has refused to grace our broadcast airwaves.  He is fuming about my tweets from Raleigh. . .The word abruptly really pissed him off.  Now Trump wants me to apologize. . .journalists do not apologize for accurate reporting.

Apparently tweeting that I should be fired, calling me a liar in front of millions of people on national television, and receiving death threats from his followers shortly thereafter was not enough punishment.  He wants penance.  He wants groveling.

Trump boycotted NBC, Meet the Press, Today, and Nightly News for about a week before he relented and called Ms. Tur.  She reflected on Newsweek’s Jimmy Breslin, who was the first reporter to recognize Trump’s shtick:  “Trump bought reporters, from morning paper to Nightly News, with two minutes of purring over the phone.”  The seduction dance was back on.  Fortunately, NBC had her back:

I apologized to the executive producer of the Today show, since Trump was now making more appearances on Good Morning, America.  To his credit, Don Nash said he could not care less.  Don’t apologize he told me.

To have support from the company is everything ~ but I still want to smooth things over, because this is an obstacle and I want to get back to reporting.

Everyone who aspires to a career in broadcast journalism should read Ms. Tur’s book.  The grind and sacrifices are enormous:

To cover the Trump campaign. . .I sacrificed a vacation, a boyfriend, a dream job overseas, and in many ways stability.  But these are the normal fatalities of ambition.  Lots of people torch their personal lives for a shot at professional success.  But now, moving box by moving box, I am losing something else before my eyes.  Not just a personal life ~ but a life itself, a way of being in the world. 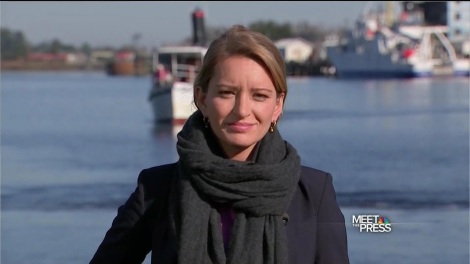 Hillary Clinton called Trump supporters a “basket of deplorables.”  I think it probably cost her the election.  Trump was pandering to people who were closet racists, and they loved him for making their secret sentiments socially acceptable.  Sadly, Ms. Tur didn’t timely or clearly articulate what she witnessed at Trump rallies:

But inside a Trump rally, these people are unchained.  They can drop their everyday niceties.  They can yell and scream and say the things they’d never say out loud on the outside. . .

On the outside, this kind of behavior is disreputable.  But inside a Trump rally, they can tell a woman she’s ugly and needs more makeup.

Katherine Bear Tur was born on October 26, 1983 which ironically is Hillary Clinton’s birthday.  Her parents were freelance journalists in Los Angeles.  Her dad Bob flew the helicopter while her mother Marika was the camera operator.  Ms. Tur was born after they filed a report to KABC about their anchor Jerry Dunphy, who had been shot in a “mugging gone bad.”  Her folks were typically the first on the scene of breaking news, and rival assignment editors would scream over the radio at their teams:  “Find that asshole Tur!”

Ms. Tur worried about Trump skewering her because her dad is transgender.  It’s unfortunate that she didn’t get to compare notes with Mr. Wolff during the campaign.  He had heard the rumor that Trump’s late alcoholic brother Fred Jr. was gay.