Beatriz Williams is new to my bookshelf.  Cocoa Beach is one of the most intriguing books I’ve read this summer.  Ms. Williams exquisitely transitions from World War I to post-war Cocoa Beach, Florida in a series of flashbacks as Virginia Fortescue Fitzwilliam tries to discern who is worthy of her trust. 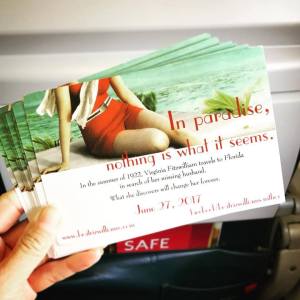 There’s nothing more damaging for a girl than
a father she can’t trust.
– Beatriz Williams, Cocoa Beach

Her inventor father murdered her mother.  It is a skeleton in her closet as she sails to Europe to join the Red Cross during World War I as an ambulance driver.  Can she trust the brilliant, dashing, charismatic British surgeon, Capt. Simon Fitzwilliam, who she meets on her first courageous trip to pick up wounded soldiers?

Justice is a beautiful word,
a damned noble word,
but it’s just revenge,
all dressed up for legal purposes.
Beatriz Williams, Cocoa Beach

After the war, Simon and Virginia get married.  On their honeymoon, the newlyweds visit his parents who are gravely ill with influenza.  While Simon battles to save his parents, Simon’s twin brother Samuel convinces Virginia that she can’t trust her new husband.  She sails for America alone and doesn’t realize she’s pregnant with her daughter Evelyn.

After his parents’ deaths, Simon moves to Cocoa Beach, Florida to manage the family’s failing shipping and citrus empire.  His solution is to become a rum runner during Prohibition.  He has no idea that he has a daughter.  Virginia receives word that he died in a fire and left his estate to her.  The attorney handling the estate is patronizing, and Virginia ~ who drove ambulances during WWI ~ is justifiably furious.

Virginia drove the Hunka Tin, a Ford Model T ambulance, during WWI on the Western Front

Virginia’s instincts are telling her that Simon is still alive.  She believes she can trust his sister Clara, and the sisters-in-law have a conversation about Simon’s manipulative narcissism:

He didn’t give a damn for your feelings; that was his strength. You can do anything if you don’t care how other people feel.

I don’t understand that. How he could seem so sympathetic, if he didn’t really care.

Because he knew what you were feeling. Don’t you see? He knew, but he didn’t care. He was a tremendous actor. He acted his way through life, manipulating us all like puppets. Everyone else was taken in by him, but I knew. I knew how rotten he was inside. I could just smell it, the rottenness. I’ve always sensed things like that, as if I could just sort of see someone’s spirit, like the color in a rainbow.

Is Clara telling the truth about Simon?  Is Samuel?  Who can she trust?

In Paradise, nothing is what it seems.