A challenging quest is a phenomenal way to transform from barely surviving to thriving and finding joy.  If you are lucky, write well, and know how to promote yourself, you might end up with a best-selling book(s) and movies like Elizabeth Gilbert (Eat, Pray, Love), Jeanette Walls (The Glass Castle), J.K. Rowling (Harry Potter series), Tyler Perry, Pat Conroy, Eve Ensler, and Cheryl Strayed (Brave Enough and Wild).

I first became intrigued with the idea of quest as therapy after reading Grandma Gatewood’s Walk.  While my hips and knees will never allow me to hike the Appalachian Trail multiple times, we all have inside of us a bucket-list challenge which could become transformative.

Rise:  How a House Built a Family recounts how Cara Brookins was inspired to build her dream house during a Thanksgiving weekend retreat to the Ozarks mountains.  She had just escaped her second abusive marriage.  She and her four children were traumatized and needed a way to heal.

With an investment of just $130,000 and sweat equity, they built Inkwell Manor, a 3500 square foot, five bedroom house with a three car garage and library, in Bryant, Arkansas in just nine months in 2008!  The home is now worth about ½ million!

I’ve learned that I can do anything.
– Hope Brookins

While Ms. Brookins’ story is quite inspiring, I can’t recommend the book to abuse survivors who have PTSD or Complex-PTSD.  The “Fall” chapters about the abuse she experienced from her  schizophrenic second husband Adam and her third husband Matt caused me to have horrendous nightmares.  They alternated with the very inspiring and instructive “Rise” chapters about how a mother’s longing for a library became a family quest. 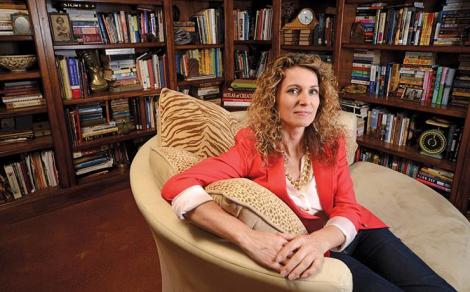 Cara Brookins in her beloved library at Inkwell Manor.

Find your big thing…
and whatever healing trip you take,
take your family with you.
-Cara Brookins

Because “moving forward” was Ms. Brookins’ mantra, I am perplexed why the book’s format repeatedly drags the reader back into the author’s horrendously terrifying experiences of abuse.  Spoiler alert:  Adam ultimately commits suicide.

Although I did enjoy reading that she named her gun “Karma,” my recommendation is that readers skip the “Fall” chapters. 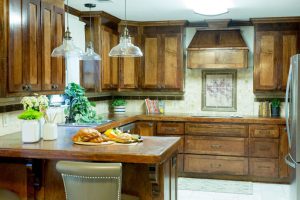 It became something I had to do
to let go of this shame.
– Cara Brookins

The “Rise” chapters provide a wealth of good information and tips on how to become your own general contractor without going bankrupt.  And, there is considerably more information available today via YouTube tutorials, HGTV, etc. than there was when Ms. Brookins embarked on her quest.  Anyone can learn construction skills by volunteering on a Habitat for Humanity project. 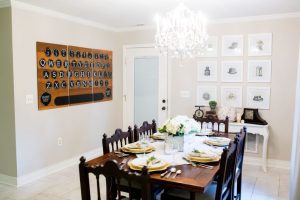 Ms. Brookins and her children had an exceedingly clear vision of their dream home.  They spent hundreds of hours planning and designing the home and watching YouTube tutorials before she approached banks for a building loan.  She shamelessly pumped experts for advice and tips as construction progressed.

All quests have challenges and obstacles.  Ms. Brookins candidly shared that she sacrificed sleep and worked punishing hours to stay afloat financially.  Her kids made tremendous sacrifices and likely did tasks which weren’t even remotely age-appropriate.  I didn’t get the sense that nutritious meals were part of the equation.  She made some expensive DIY vs. hiring experts mistakes and ignored her instincts on the reliability of the professionals she did hire.  But, her biggest mistake, in my opinion, was not aggressively marketing the house they lived in during construction.

At the end of the day, she now has the home and library of her dreams as well as a best-selling book and new career.  Three of her kids have their own successful careers.  Bravo!