When there wasn’t one person anywhere in the United States ~ not my family, not my friends, not one DV advocate or shelter ~ who would protect me from Oregon’s Appellate Court Judge R. William Riggs, President William Jefferson Clinton stepped up to the plate.  He signed a law prohibiting DV perpetrators from being able to buy firearms.

When I wrote to thank him on election day, 1996, I said this wouldn’t do much to stop perpetrators who already owned an arsenal of guns, who would never be arrested, and who were on the short list to become a federal judge.  I didn’t name any names.  My address was in Illinois.

A few weeks later, I was beyond shocked to receive a letter from the White House.  Pres. Clinton had decided that no one with even a hint of a whiff of an allegation of domestic violence would be part of his administration.  Wow!  I didn’t know at the time that he had witnessed domestic violence as a child.

I have no idea how Pres. Clinton knew which judge on a short list was the judge who had vowed that he could kill me and “get away with it.”  But, through the grapevine, I heard that Bill had been told that hell would freeze over before he would be appointed to the federal bench by Pres. Clinton.

It could be they figured it out from all the work I did on Bill Clinton’s 1992 campaign in Oregon.  It could be that the White House discussed it with the late, great Sen. Paul Simon (D-IL), who had known me since I first campaigned for him at age 3.  Sen. Simon was the head of the Senate Judiciary Committee.  I ran into his second wife on the campaign trail in Oregon, and they knew about the abuse I had experienced.  It could be that they did a background check on me and discovered I’d been licensed to practice law in Illinois and Oregon.

I’ll never know.  It’s odd because at the same time the Senate Judiciary Committee had been scouring the country looking for me.  A Congressional aide who knew about Bill’s long history of abuse told them they needed to talk to me about his fitness for office.  By the time they found me, it was a moot point.

The state patrol in Oregon did find me when the governor wanted to appoint him to the Oregon Supreme Court.  I told them it was a sorry state of affairs in Oregon if he was the best they could find for their supreme court.

The same attorney who warned me about Bill’s history of abuse at the Oregon Bar convention in 1992 and blew the whistle on him to the Senate Judiciary Committee told me that she would not block his election to the Oregon Supreme Court.  I was shocked.  She ran the campaign of his most viable opponent and claimed ignorance when questioned about Bill’s campaign slogan:  he had extensive experience with family and child abuse.  Right.  Hands-on. 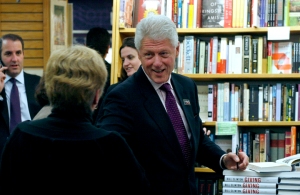 Bill Clinton and me

When I first met Bill, he was on his last assignment for the U.S. Navy Reserves.  He tearfully confided that he had been denied his dream of being elevated to “flag” (Admiral) and had been asked to resign.  Why?  His abuse and stalking of his third ex-wife (who was also in the military reserves) were not the actions of a gentleman.  Go Navy!

I naively thought he’d learned his lesson.  He passionately wanted to become a federal court judge, and I’m certain a huge part of my appeal to him was my family connection to Sen. Simon.  Bill was a brilliant guy, and I didn’t think he’d dare risk his dream a second time.  Would he?

Bill had been escalating his threats, and I decided that I needed a bit of insurance.  So, I boldly told him about my visit with Mrs. Simon on the campaign trail and painted a vivid picture of what would likely happen to him if he did to me what he had done to his ex-wife.  I thought it would wake him the hell up.  It didn’t.

The last time I spoke to Sen. Simon he apologized for not directly intervening.  I burst into tears and told him that he had done far more to protect me than his old buddy, my father. 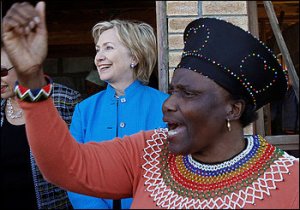 VAWA, the Violence Against Women Act, was passed on Bill Clinton’s watch.  Meanwhile, First Lady Hillary Clinton was the first to proclaim that women’s rights are human rights.  As Secretary of State, she embedded the Hillary Doctrine into U.S. foreign policy:

I never listen to campaign promises.  I look at track records.  Hillary Clinton is the only candidate running for president who has a solid track record on preventing violence against women and children.  This mission is at the core of her entire career.

Your vote is your voice.  If you don’t vote for her, you are telling the world that violence against women and children is an issue they can ignore.

I will always vote for the Clintons because they were there for me when I was terrified and alone.  It still boggles my mind that the only person who gave a damn about my safety in 1996 was the president of the United States.