So many narcissists.  So little time.

It’s been one hell of a week, dear readers.  I’ve lost track of the number of PTSD episodes I’ve had in the last couple of weeks ~ most courtesy of the folks being paid to help me.

A woman whose supporters begged me to help her with the injustices she had experienced stabbed me in the back and announced she had shared our private e-mail messages with people who know the judge who has been stalking me since 1992.   If he didn’t know where I was before, he sure as hell does now.  I realized this week that she didn’t really want help or to see her kids again.  If she got her kids back, she’d have no reason to yowl.  Yowling had gotten her 15 seconds of fame, and she didn’t want to give it up.

So, folks, I’m done.  I will share what I know on my blog.  If you need help, I encourage you to read my posts.

A Pierce County, WA deputy sheriff murdered his in-laws before turning the gun on himself this weekend.  I can’t bring myself to write another post about the bullshit in Pierce County.  It is clear to me that the politicians and judges and cops don’t get it and don’t want to get it.  Stray dogs get protected in Pierce County, but girls who get beaten and raped by their daddies are on their own.  Nobody cares until their daddy shoots a cop.

You’d think that with two female senators and a female governor that Washington State would have less callous indifference to domestic violence.  Nope.  Gov. Gregoire cares about her cops, but she doesn’t give a rip about the women and children.

For about a year now, I’ve been trying to get help from Washington’s Department of Social and Health Services (DSHS).  I’m absolutely astonished that so many people can get paid so much money to do so little.

I had a conference call with DSHS’s chief of staff Tracy Guerin and Andres Aguirre, the director of vocational rehabilitation.  They made big promises, but their minions didn’t want to do the heavy lifting.  MaryAnne Lindeblad, who is the poster girl for callous indifference, had the audacity to suggest I return to the people who made a train wreck of my life for help.  I’m pretty sure that’s the definition of crazy.

I read the psychiatrist’s report and wondered whether she’d been impaired during our intake appointment or whether she’s just another person in a position of power with a narcissistic personality disorder.  I was stunned at the number of misquotes and inaccuracies in her report since she took copious notes of my comments.  Her synapses must misfire. . .you know. . .right brain and left brain don’t quite connect.

She must not have ever met anybody higher up the food chain than a dog catcher because she couldn’t fathom somebody might have actually met a president more than once.  Didn’t bother to verify my credentials. . .just decided I was delusional about them.  I’m glad I didn’t tell her about the venerable Tavern Club in Chicago.  She probably would have assumed it was some bar.   Right.   I was sad to learn from Google that this bastion of old money and great conversation had ceased to exist.  The old men who spoiled me rotten there have gone on to the great martini in the sky.  I will be forever blessed that they taught me early on that money doesn’t buy happiness.  Thanks for the memories, boys! 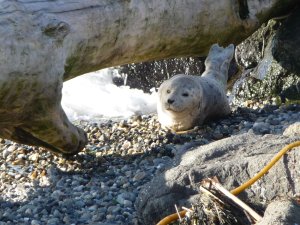 It took me a while to realize Ms. Lindeblad at DSHS had passively-aggressively told me to go screw myself in response to the grievance I had filed with my HMO.  I can’t decide now whether she’s oblivious to the dysfunctions or whether she’s actively enabling them.  Doesn’t matter.  It’s clear she has no intention of getting me the assistance I need.  I’m betting her own health care plan is quite rich, and she doesn’t have to beg anybody for anything.

Washington needs to trim their ranks by 12,000 employees.  I have some names I hope are at the top of the list.

I was about to print out my letter of protest to Ms. Dreyfus when I decided why bother?  It is clear the folks who are getting paid to help me recover from my disabilities and to become financially self-sufficent are intent on keeping me down.

After I had myself a good ole pity party, I decided to check my e-mail.  I was pleasantly surprised to get a message ~ late on a Sunday evening ~ from Andres Aguirre.  He’s a prince of a guy.  He gave me some great suggestions.  The greatest gift, however, was the reminder that there are some great people out there who care what happens to folks.

Do It for Love or Don’t Do It at All

From now on, I’m going to do it for love or I’m not going to do it at all.  It is time to surrender.  I’m done fighting and begging for scraps from someone else’s banquet.

There’s a lyric I love from the movie It’s My Turn that I promised myself would become my motto way back in the 1908s:  “This time’s just for me. . .for years I’ve seen my life through other people’s eyes. . .But, now, it’s my turn.”

And, I think I just might take a cue from Saffire:  Uppity Blues Women and become a “bitch with a bad attitude. . .bad attitude.”  I’m done being the good girl.  From now on, I’m making my own rules.

8 responses to “My Life as a Dog: Done Begging”