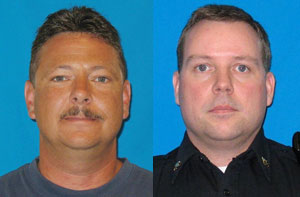 Mundell is fighting for his life at Harborview Medical Center in Seattle.  Hausner is in stable condition at Madigan Army Medical Center at Ft. Lewis.  These brave officers got shot-up last night by David E. Crable, who was a repeat domestic violence offender. 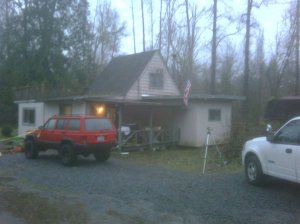 The officers had been called to the home of Crable’s brother near Eatonville about 8:45 PM last night because Crable was drunk and belligerent.  He wasn’t going to be arrested.  The officers were merely intending to escort him home.  Crable collected his clothes and pulled a gun on the officers.  He fired 10 rounds at close range at the officers before Mundell fired the shot that killed him.

Mundell was shot multiple times.  Hausner was pulled from danger by Crable’s brother and daughter after he was shot once.

Their boss Pierce County Sheriff Paul Pastor seized the opportunity this afternoon to lobby the public for more funding for his department.

Politicians rushed to their microphones to wring their hands with “hearts and prayers” rhetoric.

It just shows if somebody’s hellbent on doing this to somebody, family members or officers, there’s nothing you can do to stop them.

Crable obviously had more than a problem with alcohol.  But, Lindquist, Troyer, and the judges in Pierce County minimize and trivialize evidence in domestic violence cases.  Perpetrators get a slap on the wrist.  Crable, for example, was never charged with a felony despite abundant evidence that his long history of terrorizing his family was escalating.  He was, therefore, allowed to own guns.  His victims survived the best they could with nothing but a piece of paper to protect them.

Crable’s daughter wasn’t the only terrified teenager in Pierce County in 2009.  Maurice Clemmons’ daughter was similarly left unprotected after her daddy raped her until her daddy assasinated four Lakewood cops.  Then, the system pulled out all the stops to arrest him.  The people who allegedly aided and abetted him before he was murdered by a Seattle cop are facing serious jail time.

Why does Pierce County have so many murderers who “slip through the cracks”?

Pierce County also has the distinction of having the most bank robberies in Washington State.

The coffee shop where the Lakewood officers were assasinated is open again.  It is owned by a former cop and is quite popular with local law enforcement.  My Christmas wish is that Troyer, Lindquist, and the Pierce County judges will “wake up and smell the coffee.”  Domestic violence is the number one reason people call 9-1-1 in Washington State.  If the criminal justice system had taken Crable’s escalating violence seriously, two seasoned veterans would be at home celebrating the holidays with their families instead of fighting for their lives.

There’s no excuse.  Callous indifference to domestic violence wounded those officers as much as the bullets from Crable’s gun.

4 responses to “Domestic Violence: What’s It Going to Take to Wake Up Pierce County WA Officials?”