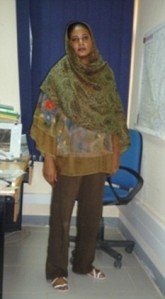 In the spirit of Gahndi, Lubna-Ahmed al-Hussein is willing to submit to 40,000 lashes for wearing pants in public.  Ms. Hussein works for the UN which has recently been criticized by Eve Ensler for failing in their promise to prevent violence against women in the Congo.  The UN is not supporting Ms. Hussein’s courageous decision to go on trail rather than opt for diplomatic immunity.

Ms. Hussein was wearing the outfit in the photo above when she was arrested.  She plans to wear the outfit each time she appears in court.  Ten of her companions have already accepted their punishment of 10 lashes.  But, Ms. Hussein wants to draw international attention to the plight of Sudanese women.  The Sudan is home to Darfur.  She explains her decision:

She wants to be the voice of women who have been flogged for two decades over their clothing choices.

Here in the United States, Secretary of State Hillary Clinton is infamous for her penchant for wearing pants suits on the presidential campaign trail.  We feminists have whined and complained about the rampant misogyny that surfaced during her campaign and again during the Supreme Court confirmation hearings of Judge Sonia Sotomayor.

Yet, I am reminded of the late, great Rev. Dr. Martin Luther King, Jr.’s call which I have edited to give it a feminist slant:

If a woman hasn’t discovered something that she will die for,

she isn’t fit to live.

It sounds a bit melodramatic and self-righteous, but it does raise a good question:  do we have the courage of our convictions?  Would we take the risk of enduring 40,000 lashes so our sister’s backs would be spared?  Or, would we opt for the diplomatic immunity?

Gahndi made the hard choice which inspired Dr. King.  Both were assassinated.

My prayer is that the international outrage will be so loud and clear that Ms. Hussein’s back will never experience the whip.  And, I hope she’ll shake up the UN ranks to get them to put action behind their pledge to end violence against women.