The Charleston Nine were gunned down on June 17. 2015 during a Bible study meeting at Mother Emanuel AME.

They live in love and their legacies will live in love.
Hate won’t win.
Alana Simmons, granddaughter of the late Rev. Daniel Simmons

He’d been planning this massacre for a long time, but the authorities never tagged him as a potential terrorist despite a racist manifesto which was posted in February.  I wasn’t at all surprised to learn the evil person who committed this evil act witnessed domestic violence at home.  Yet, the profilers who are supposed to protect us from terrorism steadfastly refuse to acknowledge the link between domestic violence and terrorism.  The net result is that nine very good people are dead.  Nine very good people who infused the world with love and faith. 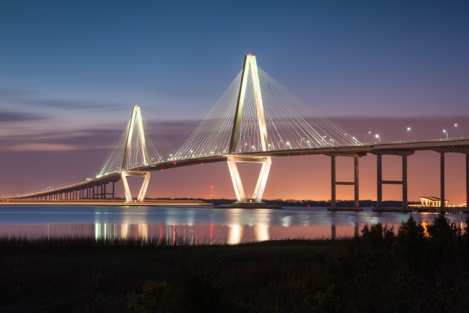 We are the family that love built.
– Bethane Middleton Brown, sister of the late DePayne Middleton Doctor

The beautiful Ravenel Bridge is as iconic as the Mother Emanuel church in Charleston.  It spans the Cooper River and links Mount Pleasant to Charleston.  I love bridges.  When we cross a bridge, we leave the past behind and embrace the future.  On Sunday, it became the Bridge to Peace.

[The shooter] had this crazy idea that he would divide us.
All this did was make us more united and love each other even more.
– Charleston Mayor Joe Riley
Four moms on Facebook: Darcy Creaturo, Lauren Joyner Vicars, Dorsey Edwards Fairbairn, and Gnosha Burk conceived the Bridge to Peace Unity March for Emanuel AME Church and invited their friends to participate.  Ms. Fairbairn, who experienced grief at a young age, explained:
I just thought, “Okay. Let’s do this. Let me post it on my Facebook page.” Thursday night at 8:07 I said, “I want to organize a unity chain over the Ravenel Bridge. How many people can we get to stand together with hands held?”

We’re saying there’s one race:  the human race.
And we’re not going to tolerate this kind of violence.
– Carl Ritchie, Police Chief, Mt. Pleasant, SC
They created a Facebook page.  The plan was to march onto the bridge at 7:45 PM Sunday evening so that the group would be at the summit of the bridge at sunset to observe nine minutes of silence and to sing “This Little Light of Mine.” 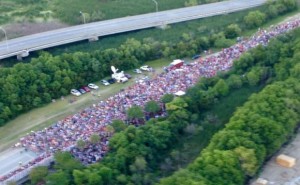 Almost 20,000 good people did something on Sunday.  It was Father’s Day.  It was the first day of summer.  It was hot.  It was humid.  I pray that their commitment and courage will be the catalyst for a sea change in the toxic climate of racism which is a cancer on our country.

Stephen Colbert walks in a unity chain on the ravanel bridge in Charleston in support of those lost in the church shooting.

Ironically, the event organizers didn’t make it onto the bridge.  They observed the event from Mt. Pleasant’s Waterfront Memorial Park in awe.  Ms. Fairbairn said:
I can’t even process it; I feel like I’m in a movie. The people raised in Charleston are not raised knowing hate ~ they’re raised in love, and that was obvious tonight. … I hope the families feel the honor and the love from this community. 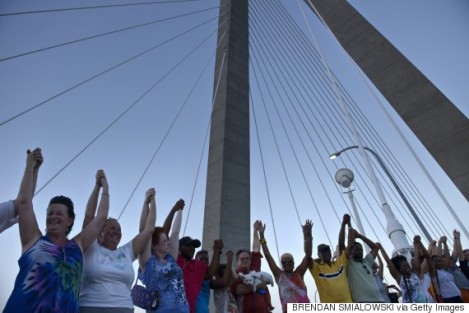 It is not good enough to simply show sympathy.
We as a people have got to change.
That’s how we honor those families.
– Pres. Barack Obama 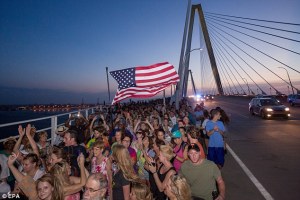 The next step is to remove the Confederate flag from the grounds of South Carolina’s state capitol and from all license plates.