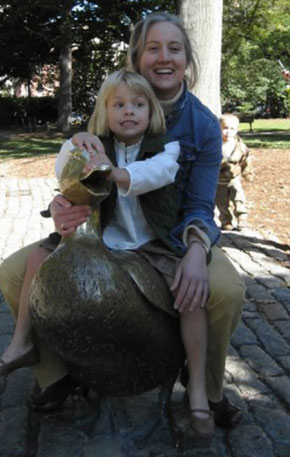 Sandra Mills Boss had the composure to endure brutal cross-examination by her ex-husband’s attorney Jeffrey Denner in Boston on Monday and Tuesday.  It was a classic case of blaming the victim.

Sandra Boss is from an upper-middle class family here in Seattle.  Her father is a retired Boeing engineer.  She and her twin sister Julia are uber-competitive.  Sandra went to Stanford for undergraduate work and Harvard for her MBA.

She became a high-level executive in the prestigious consulting firm McKinsey & Company and currently runs their London office.  She makes more in a week than most folks make in a year.  Her annual salary has been reported between $1.2 and $2 million.

Julia, who had graduated from Yale, introduced Sandra to “Clark Rockefeller,” who Julia had met at Saint Thomas Church (Episcopal)  in Manhattan, at a Clue party.  Sandra was Miss Scarlett, and Clark was Professor Plum.  The attraction was mutual and instanteous.

Although there was a wedding at a Quaker Meeting House on Nantucket in 1995, it isn’t clear whether the couple were actually legally married.

“Clark Rockefeller” is actually a Bavarian-born brilliant con man named Christian Karl Gerhartsreiter.  Yes, he duped Sandra.  But, as Christopher Crowe, he also conned venture capitalist Stan Phelps, Nikko Securities, and Kidder, Peabody into hiring him despite the fact that he had absolutely no credentials.  He conned sophisticated members of the art world into believing his “derivative” (fake) paintings were part of a billion dollar collection inherited from his great-aunt Blanchette, widow of John D. Rockefeller III and founding benefactor of the Museum of Modern Art. 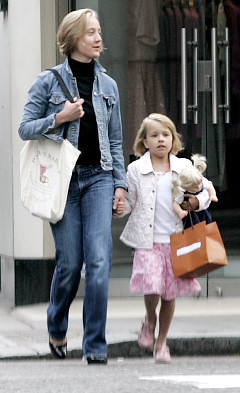 Christian is currently on trial in Boston for kidnapping his daughter Reigh “Snooks” Storrow Mills Boss during his first supervised visitation in July 2008 after the couple divorced in December 2007.  For five days, he led 20 FBI officers and a Boston Police task force on a brilliantly orchestrated goose-chase.  Their efforts were further stymied by the fact that Christian had no Social Security number, driver’s license, or passport.  He had converted $300,000 of his funds into gold coins which are the perfect currency for someone on the run.  He bought a house in Baltimore using cashier’s checks and the alias Chip Smith.

He was finally caught after the realtor who sold him the house tipped off the authorities.  Fingerprints on a wine glass revealed his true identity as well as a link to a cold murder case in California ~ Christian is considered a person of interest.  Christian has phenomenal instincts for getting out of town just before law enforcement closes in on him.  He is similarly a master at not leaving a paper trail ~ he persuaded Sandra to file their income tax returns as a single person.  He perceives his multiple identities and aliases are “pen names.”

Similarly, he characterizes himself as a Quaker pacifist who is committed to non-violence.  But, this doesn’t square with many reports of temper tantrums and abusive behavior.  Soon after their marriage, Christian’s charismatic, charming, seductive mask came off.  He became controlling and critical of Sandra’s friends.  His paranoia and emotional and physical abuse motivated Sandra to leave him in 2000.  But, he wooed her back.  She became pregnant with Snooks.  The abuse continued, and Sandra filed for divorce and hired a private detective.  After a highly contentious battle, she was awarded their houses and custody of Snooks.  Christian settled for $800,000 and a promise there would be no due diligence into his background. 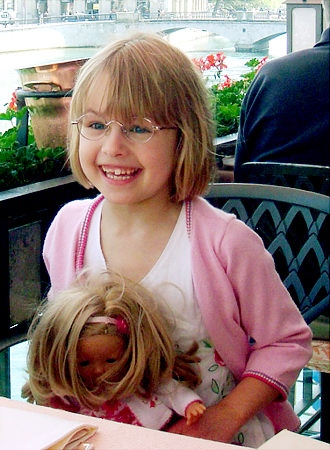 Manipulation of the Legal System as an Instrument of Abuse

My sense is that Christian is a Pit Bull because he claims, “I absolutely love her.  I wish she hadn’t walked out.”  He can no longer physically or financially abuse Sandra, but his attorney Jeffrey Denner verbally and emotionally accosted her  in court knowing the cameras were rolling and the sensation of the trial would guarantee it would receive lots of media attention.

Denner’s cross-examination of Sandra was described by courtroom observers as “blistering” ~ “pummeled with questions” ~ “intense grilling making it seem more as if Boss was on trial for a crime rather than ‘Rockefeller'” ~ “questioning became increasingly personal and accusatory.”  How could such an accomplished business woman not figure out how to solve her personal problems?  Sandra responded:

The fact that we’re talking to each other now suggests this is a difficult marriage to get out of.

I cannot fathom how humiliated Sandra must have felt.  She has been consistently described as private, reserved, naive, and quiet.  Yet, she maintaned her cool and chose her words carefully; she was resolute and professional:

I came from a place where people didn’t jaywalk.  It never occurred to me that I was living with someone who was lying about such basic stuff.  I’m not saying I made a good choice of husband.  It’s pretty obvious I had a blind spot.  All I’m saying is, it’s possible for a person to be brilliant in some areas and stupid in others.  There’s a difference between emotional intelligence and intellectual intelligence.

Why didn’t she leave?  She did try to leave several times, but he became angry, threatened her, and told her she would lose custody.  Although she was the sole breadwinner, he had complete control of their bank accounts and their passwords:

I was frightened by the consequences of doing things wrong.  My professional life was not scary.  My personal life was scary.  [He] controlled all of the money, spent the money, the defendant spent all of the money. . .there were no savings.  The abuse was pretty rough. . .a lot of yelling.  I woke up hungry most nights.  [He kept their home in Cornish, NH uncomfortably cold.]  I couldn’t figure out how to organize the money to [leave].   I worked hard on finding out how to do it for a number of years.

Christian’s expert witness, Dr. Catherine T. Howe, testified that she diagnosed him as having delusional disorder with grandiose aspects and narcissistic personality disorder.  Therefore, he is not guilty by reason of insanity.  Sandra disputes this assessment:

I firmly believe given the meticulous care the defendant took to maintain a variety of different worlds that he was completely clear on what he was doing.  I saw behaviors that made me think he wasn’t all well, definitely ~ obsessive kinds of behavior.  I saw a lot of anger.  I saw an absence of empathy.

Update:  The story of Sandra Boss and “Clark Rockefeller” will be featured in a Lifetime television movie which premiers on Saturday, March 13, 2010.