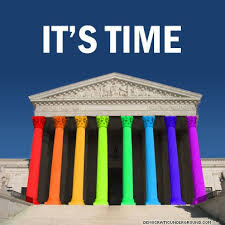 Where were you when SCOTUS ruled that same-sex couples were granted the fundamental right to marry?  I had just woken up and turned on CBS This Morning.  It was breaking news.

No union is more profound than marriage, for it embodies the highest ideals of love, fidelity, devotion, sacrifice, and family.  In forming a marital union, two people become something greater than once they were.  As some of the petitioners in these cases demonstrate, marriage embodies a love that may endure even past death.  It would misunderstand these men and women to say they disrespect the idea of marriage  Their plea is that they do respect it, respect it so deeply that they seek to find its fulfillment for themselves.  Their hope is not to be condemned to live in loneliness, excluded from one of civilization’s oldest institutions.  They ask for equal dignity in the eye of the law.  The Constitution grants them that right.  It is so ordered. 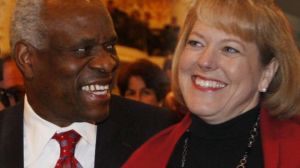 Clarence Thomas married Virginia Lamp in 1987.  They were able to legally marry because SCOTUS in 1967 decided anti-miscegenation laws were unconstitutional in Loving v. Virginia.  It was repeatedly cited as precedent for today’s ruling:

The Court, like many institutions, has made assumptions defined by the world and time of which it is a part. . .In defining the right to marry these cases have identified essential attributes of that right based on history, tradition, and other constitutional liberties inherent in this intimate bond.  [Loving cited]. . .

This analysis compels the conclusion that same-sex couples may exercise the right to marry. . .

A first premise of the Court’s relevant precedents is that the right to personal choice regarding marriage is inherent in the concept of individual autonomy.  This abiding connection between marriage and liberty is why Loving invalidated interracial marriage bans under the Due Process Clause. 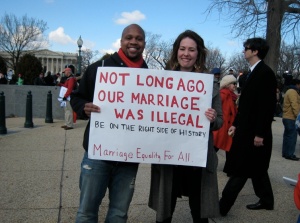 The Constitution contains no “dignity” Clause, and
even if it did,
the government would be incapable of bestowing dignity.
– Justice Thomas, dissent in Obergefell v. Hodges

In his ranting dissent, Justice Thomas argued the Due Process Clause was irrelevant and eviscerated the right to human dignity denied to slaves: 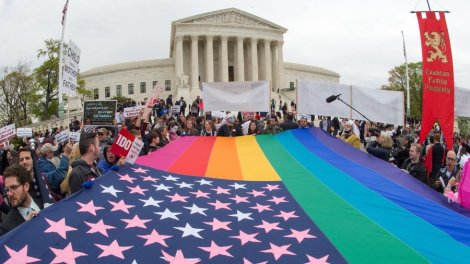 Their hope is not to be condemned to live in loneliness. . .
They ask for equal dignity in the eyes of the law.
– Justice Kennedy, Obergefell v. Hodges

Justice Thomas concluded his lack of empathy and ignorance of history with support for the bigots who oppose gay marriage:

If SCOTUS in 1967 had adhered to traditional views of marriage, Justice Thomas wouldn’t have been able to legally marry Virginia Lamp in 1987.  While I am appalled by Justice Thomas’ arrogant, narcissistic rant, I’m not surprised.  He didn’t respect the dignity of Anita Hill when he sexually harassed her at the EEOC, and it was his job to stop corporate rape.

You can read the full text of today’s landmark decision.