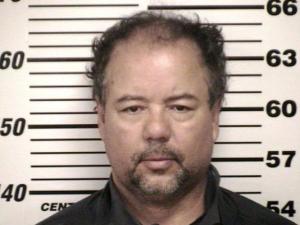 What does it take for our criminal “justice” system to wake the hell up?  In almost every sensational criminal case, we ultimately discover that he practiced on the women and kids in his life before his penchant for violence made headlines.  I don’t know what level of anger is beyond livid, but that’s where I am when I hear that another DV perpetrator didn’t get punished until he took his violence out into the public arena.

What the hell does it take for the criminal “justice” system to hold these bastards accountable?  Ariel Castro was sentenced to life in prison + 1,000 years for imprisoning and abusing three girls, but it appears he got just one slap on the wrist for what he did to his wife and kids.

Anthony Castro and his late mother Grimilda Figueroa, who passed away in 2012

On the Today Show this morning, his son Anthony described the incredible violence he and his mother experienced behind closed doors:

I did grow up in a house with a lot of fear and a lot of violence. . .incredibly strict.  He had a temper.  He wasn’t a monster 24/7, but if you crossed him there would be. . .physical consequences. . .I remember crying myself to sleep when I was a kid because my legs were covered in welts from belts. . .seeing my mom getting beat up. . .no one should ever have to see their mom crumpled up in a corner on the floor the way I did so many times. . .

The locks on the doors weren’t unusual.  Even when we lived there, there were locks on the basement door, the attic door, the garage was locked, windows were nailed shut. . .

I want to express how happy I am that because of all this my father will never be able to hurt anyone ever again.

USA Today reported today that Ariel Castro nearly beat his wife to death while she was recovering from brain surgery in 1993.  CBS reported the violence she experienced in 2005:

. . .breaking her nose twice, knocking out a tooth, dislocating both of her shoulders, and threatening to kill her and her daughters several times. . .

ABC reported that he also beat her in 1989 and 1993.  He got one slap on the wrist.  I weep when I think about the decade of horrendous violence against Amanda Berry, Gina DeJesus and Michelle Knight that could have been prevented if the “justice” system had protected Anthony Castro and his late mother Grimilda Figueroa.

Why do DV perpetrators like Ariel Castro have to make headlines before the “justice” system holds them accountable?  They hold these bastards accountable at the Jeanne Geiger Crisis Center in Massachusetts and haven’t had a DV homicide since 2005.

Will He Kill?  Massachusetts’ Pilot Program for Preventing DV Fatalities