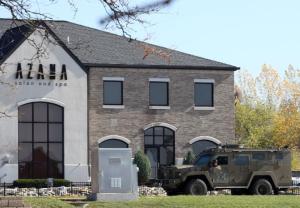 Rep. Paul Ryan (R-WI) has issued the obligatory press release in the wake of the DV-related mass shooting and fire at the Azana Salon and Spa in Brookfield, Wisconsin. But, where the hell was he when Violence Against Women Act (VAWA) funding was blocked?  He was engaging in partisan bickering otherwise known as the Republican’s War on Women.

This is why I get my knickers in a knot and raise hell about politics.  This is why your vote matters.  This is why I support Pres. Barack Obama and V.P. Joe Biden.  We can count on them to keep us safe.  The Republicans, on the other hand, will issue a hand-wringing press release and pretend to care we’re dead.

My mother was shot.
– salon customer

Look at this photo. Really look at it. This could be you ~ at a spa on a sunny Sunday afternoon for a bit of pampering ~ scared to death because your favorite hairdresser was gunned down while she was spoiling you. You could have been one of the terrified women hiding out in a massage room, listening to the sprinklers flood the building, wondering if you’d get out alive, and stepping over dead bodies after the police rescued you.  Christopher Pfeiffer witnessed a young woman fleeing the carnage:

She was screaming, yelling, crying hysterically.  She was pleading for help.  She kept saying, “My mother was shot.”

Witness Joe Brent told Fox 6 that he was getting lunch at the neighboring McDonald’s:

I heard one [gunshot] and then I heard a girl yelling.  I saw two more females coming out and they weren’t able to walk. They got put on the stretchers and they got into the ambulance. . .I went to my car and saw a girl coming out from the salon and she was bleeding in the neck with a paper towel over her neck. . .She was very hurt and she had to get escorted by a police officer because she couldn’t walk.  She was yelling. 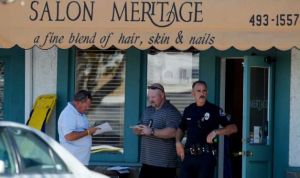 Same damned thing happened last year on October 12 at the Salon Meritage in Seal Beach, CA. Eight people were killed including the ex-wife of a pit bull abuser:

Eight people were killed and a 73-year-old woman was seriously injured on Oct. 12 when [Scott Evans] Dekraai allegedly went on a shooting rampage at the Salon Meritage. Dekraai was in the middle of a custody battle with his ex-wife [Michelle Fournier], and friends said Dekraai had previously threatened to kill her twice, once telling her he would shoot her at work.

On Friday, his attorney told the court that Mr. Dekraai will plead guilty if voters approve Proposition 34, the anti-death-penalty measure in California.  He had told police that the victims were “collateral damage” in his custody dispute:

Witnesses told police that Dekraai walked into Salon Meritage in the early afternoon of Oct. 12 last year and immediately shot stylist Michelle Fournier, 47, his ex-wife, after arguing with her earlier on the phone over child custody.

He then shot Christy Lynn Wilson, 47, Fournier’s friend and colleague, and then salon owner Randy Fannin, 61, witnesses said, before shooting others at random. Victoria Ann Buzzo, 54; Lucia Bernice Kondas, 65; Laura Lee Webb Elody, 46; and Michele Fast, 47, were shot inside the salon. Victim Harriet Stretz, 73, was shot and wounded, witnesses said. The last to die was David Caouette, 64, who was shot while sitting in his vehicle in the parking lot outside the salon as the shooter was fleeing.

Zina Haughton Had a Restraining Order

On October 8, Zina Haughton obtained a four-year restraining order against her husband, Radcliffe Franklin Haughton, after he slashed her tires while she worked at the Azana Salon and Spa on October 4.  When it was served on him on October 18 (Thursday), he was ordered to surrender his firearms.  Sarah Justin, one of Ms. Haughton’s loyal customers, told the Milwaukee Journal Sentinel:

She was a warm and loving person.  She remembered all my kids’ names, she would always ask how your kids are doing and she’d ask about my mom and dad. I’m really shocked by this.  That upsets me in a way because something must have been going on.  To think she was holding herself together.

Fox 6 has identified Mr. Haughton’s victims as his wife Zina, Cary Robuck, and Maelyn Lind.  Four other people were wounded before Mr. Haughton turned the gun on himself.  Fortunately, the building’s sprinker system prevented the propane tank he had set ablaze from exploding. 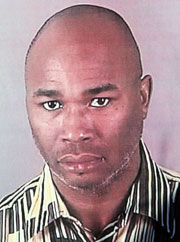 Mr. Haughton was studying pre-nursing at Milwaukee Area Technical College where Geoffrey Lee, his anatonomy professor, tried to put him on a retention alert.  Fox 6 reports that Prof. Lee noticed a change in Mr. Haughton’s behavior three weeks ago.  He was depressed because his wife had asked him to leave, and he was desperate to find housing and/or leave the state of Wisconsin.

The report states that between 2001 and 2011, 50 percent of all homicides in New Hampshire were related to domestic violence.

Pit bull abusers kill when they realize that a relationship is, in fact, over.  Then, they kill themselves because they can’t live without her.

It rips me up to write these stories.  So many lifes have been destroyed.  I find it hard to support breast cancer awareness because the callous indifference to domestic violence makes me livid.  I see purple when someone suggests there were no warning signs.  Bullshit.  There are always warning signs, but politicians like Rep. Ryan don’t give a shit.  This is why I get so pissed off when I see DV survivors supporting the Romney/Ryan ticket.  We’re nothing more than “collateral damage” in their ruthless quest for political gain.

We Interrupt This Survivor Celebration to Protest Callous Indifference:  Why 8 People are Dead in Seal Beach, CA

3 responses to “It’s October and There’s Another DV-Related Mass Murder at a Salon: Why Politics Matter”