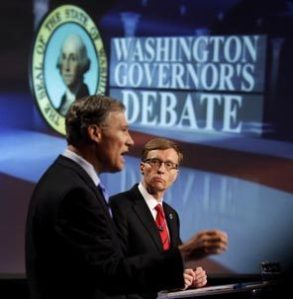 My choice for governor was far from easy.  Attorney General Rob McKenna has been a staunch supporter of DV survivors, and I had fully intended to enthusiastically support his candidacy for governor.  However, my enthusiasm wavered when I learned about the DV screening mandate in ObamaCares which Mr. McKenna strenuously opposed.

During last night’s Governor’s Debate, I wondered whether he thinks the criminal “justice” system adequately addresses all of DV survivors’ needs.  It appeared that he doesn’t comprehend that 60% of Washington State’s welfare recipients are DV and child abuse survivors.  Our falling through the cracks of a dysfunctional system costs the state $12 billion each year.  He made numerous troubling suggestions that he’ll slash our Medicaid benefits to fund education, and he was unable to understand why leveraging federal ObamaCares funding might allow the state to provide both critical needs.

Rep. Jay Inslee (WA-1), on the other hand, has been a slug on DV issues in Congress.  Actually, he hasn’t demonstrated much leadership on any major issue, and his staff’s ability to connect with constituents left a lot to be desired.  I have been told that he’s highly effective behind the scenes and is a brilliant policy wonk.  I didn’t see much evidence of this when he was my congressman, and I had lost my enthusiasm for him after I knocked on doors to get him elected in 2000.

I found myself wishing “none of the above” was a ballot option.

Since it isn’t, I listened to last night’s debate intently.  I learned interesting facts from the moderators’ questions.  For example, I did a little fact-checking today and discovered that 46% of the people in Washington State are uninsured (14%), receive Medicaid (17%), or are on Medicare (15%).  Holy crap!  If Gov. Mitt Romney is elected, this is going to be one hell of a burden on the state’s budget.  And, I know what will happen.  There will be a health care holocaust for the poor, disabled, and elderly.  There won’t be a medical provider in the state able to keep their doors open.

Mr. McKenna either couldn’t or wouldn’t grasp this.  His campaign seems to be limited to one note:  education.  I am cynical about how he plans to fund education.

Rep. Inslee piqued my interest when he suggested the state could benefit from “lean management” initiatives.  I know from my own professional experience that they are highly effective.  However, I remain skeptical over the likely resistance from our state’s bureaucrats who are recalcitrant about any change management ideas.

I was impressed when Rep. Inslee cited a Forbes article which suggests that Washington State is a great place to do business.  I have never understood Boeing’s whine which is frequently parroted by Republicans like Mr. McKenna that our business climate is oppressive.  I laughed when Boeing relocated their corporate headquarters to Chicago because Illinois has far more restrictions on employers.  Businesses in Illinois find a way to work within the system.  They don’t whine like billionaires here who have an insatiable appetite for corporate welfare.

Alas, neither candidate for governor has the will to tax these greedy bastards.  The debate was a draw, and none of the above was winning.

Then, Rep. Inslee found a way to interject anti-bullying efforts in schools as an effective way to prevent crime.  I started to wonder whether he just might be a brilliant policy wonk after all.  He may not be a champion for DV survivors, but he certainly understands the complex synergy of budgetary priorities.  And, I had the sense he has a better handle on job creation opportunities.

He closed it for me when he suggested leveraging ObamaCares funding as a way to meet the health care needs Washington State’s own 46%:

It reduces the cost burden on Washington taxpayers to the tune of $120 million.

One response to “Endorsement: Jay Inslee for Washington State Governor”