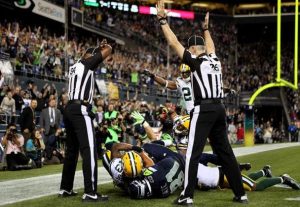 Who knew that a bad call at the end of the Seahawks/Packers football game on Monday night would produce a seminal moment in labor history?

Yesterday was a pretty awesome day for me, but the best news of the day was the end of the NFL referees’ lockout.  It closed the book on a dark time in labor-management history that started when Pres. Ronald Reagan decertified PATCO (the air traffic controllers’ union) in 1981.  My career as a union buster went poof that day.  There was no way in hell I would be party to shipping jobs overseas, slashing fringe benefit packages, or catering to the enormous compensation demands of greedy CEOs.

It’s ironic that the game that brought the lockout to an end was between the Seattle Seahawks (who play in a state that is friendly to labor) and the Green Bay Packers (who play in a state that recently busted government employee unions).  I am delighted that the union-busing ideology of Wisconsin Gov. Scott Walker (R) and Rep. Paul Ryan (R-WI,1) got them sacked.  Karma?  Maybe. 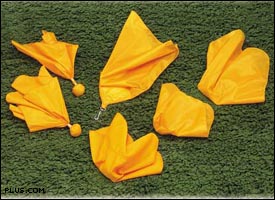 I am beyond intrigued that penalty flags came down on sexual abuse and abusive management practices on the gridiron.  Winning football stars and coaches have gotten a pass on violence against women for almost a century.  Fans and owners were callously indifferent to the pain inflicted on their prey.  Women who cried foul were demonized.  Team owners raped the pockets of taxpayers to get subsidies for stadiums (welfare for the rich).

The tide changed, however, when Jerry Sandusky was found guilty of sexual crimes against minor boys.  Teams discovered they could be held financially liable.  Team owners started kicking players to the curb for charges of domestic violence and sexual abuse.

After the NFL owners locked out the referees, they hired strike breakers who didn’t have the expertise to officiate a professional game.  Fans rebelled.  The bargaining power of the referees spiked.  The playing field between owners and referees became level.  The referees were finally able to blow their whistles and toss penalty flags for the unsportsmanlike conduct of team owners.

Henry Ford and his Model T

There is one rule for the industrialist and that is:
Make the best quality of goods possible at the lowest cost possible
paying the highest wages possible.
– Henry Ford

Football fans are glad everyone will be back to work for this weekend’s games.  But, they should be more ecstatic that this shift in the balance of power will trickle down to their own paychecks and job security.  Our economy is driven by a vibrant middle class.  Henry Ford was right.  People who don’t earn living wages can’t buy many cars.

For friends of labor, the revolt against the National Football League’s replacement refs, leading to the triumph of the real refs, is the most remarkable event since the workers at Henry Ford’s car company organized into the United Auto Workers union. And, really, could there be a better object lesson in the arrogance of the very rich — and also in the value of the labor performed by line workers whose contributions usually go unnoticed and unappreciated? No wonder the NFL’s management finally capitulated. The fans threw the flag on the owners and gave them no choice. . .

In this winner-take-all economy of ours, we rarely pay attention to those who make the game possible and help make other people rich. The real refs should give heart to all who stand up against arbitrary power and rebel against the disrespect routinely shown toward so many who are no less deserving than investors and owners of the title “wealth creators.”