Louise L. Hay recently celebrated her 85th birthday with 400 friends and colleagues.  She survived childhood rape and incest; child abuse, neglect and abandonment; teenage pregnancy; dating violence; and cervical cancer.  She was a high-fashion model who married prosperous English businessman Andrew Hay and met royalty and dined at the White House.  After her divorce, the ghosts from her past were overwhelming.  Although she never graduated from high school, she became a self-healing scholar and workshop leader.  In 1976, she self-published a pamphlet called “Heal Your Body.”

Casual support dinners for six men with AIDS led to “Hayrides” which became huge seminars which inspired the publication of You Can Heal Your Life.  When no one would publish her book in 1984, she founded Hay House.  The book has sold over 35 million copies.  Today, Hay House is a publishing power house that sells a wide array of products, conducts seminars, hosts events, broadcasts, and produced a movie about Ms. Hay’s life.  In 1985, she established the Hay Foundation which supports women and children experiencing abuse.   Hay House was incorporated in 1987;  stock is closely-held by Ms. Hay and Reid Tracy.

There is no limit to our creativity or our possibilities.
This is the perfect time to shape our own destiny.
– Louise L. Hay

[She] was the first person to really get out and talk about self-improvement and mind over matter and how important positive thinking is.

Now is the time for women to break the barriers of self-limitation.
You can be far more than you ever dreamed possible.
When women are suppressed, everybody loses.
When women win, we all win.
– Louise L. Hay
Queen of the New Age
In 2008, Oprah created a video of Ms. Hay’s life.  The New York Times sent Mark Oppenheimer to California to interview her.  “The Queen of the New Age” is a fascinating account of her life:
LOUISE HAY IS ONE OF THE BEST-SELLING AUTHORS IN HISTORY, and none of the women who have sold more ~ like J. K. Rowling, Danielle Steel and Barbara Cartland ~ owned a publishing empire.  They did not change the spiritual landscape of America and several of its Western allies. They were not pregnant at 15 and they did not lack high-school diplomas.  Finer writers they may have been (depending on your taste), and wealthier women, but it would be hard to argue that any was more interesting than Louise Hay. . .

Each one of us who speaks out creates the space for others to tell the truth.
We women have tremendous collective power when we get behind an issue.
– Louise L. Hay

SARK, who survived incest and child abuse, on her website says she was a “raving reporter” at Ms. Hay’s 85th birthday party in San Diego:

There were about 400 gleaming souls gathered to celebrate this remarkable woman, and Hay House publishing company. . .

She sailed around the party like an enlightened empress, and I heard so many eccentric and endearing stories about her.  Later, she stood on the stage and said:  “All I had was a little pamphlet all those years ago~ how did I get here?”

And then she answered her own question by saying:  “I stepped my foot on the path of life and spirit carried me.  I just responded to what spirit said.” 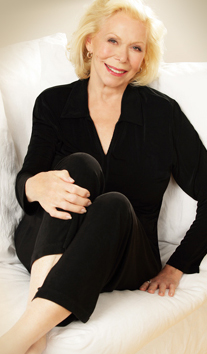 Every woman is a pioneer today.
We need new maps for living.
So grab your compass and come along.
We can all be mapmakers and pacesetters.
– Louise L. Hay

Ms. Hay is the first to admit she doesn’t have all the answers.  She shares ideas and empowers us to chart our own destiny.  She has written dozens of books which are packed with healing wisdom.  One of my favorites is Empowering Women: Every Woman’s Guide to Successful Living.  It contains an empowering idea that changed the trajectory of my life:

Each time you pass a mirror, look into your eyes with love and
say something positive and affirming to yourself.

Try it for a week.  Let me know if it works for you too.

The book also contains a passage that I think encompasses the heart of Ms. Hay’s wisdom for abuse survivors:

We see men as authority figures, and we see ourselves as the victims.  That’s how we’ve been brought up ~ to think that we couldn’t win even if we tried.  There are so many insidious ways of discounting, dishonoring, and disempowering women.  We’ve fought for our self-worth, and still we find it difficult or impossible to speak out.  The training that submissive women have had is so strong that we must learn to be vigilant about the slightest encroachment of our boundaries.

We’ve been taught to shift and to carry a man’s load for him ~ first our father, then our boyfriends, bosses, and husbands.  We have done this for so long that we think it’s normal.  We must learn to blow the whistle.  It is the fear of embarrassment and violence that keeps us silent.

How many women live in the atmosphere of a battlefield, and how many children are raised in this environment?

How do women stop this?  By knowing we can.  By refusing to be silent.

We need to be very clear that the love in our lives begins with us.
– Louise L. Hay

She survived domestic violence in almost all of its myriad guises.  She healed.  She created the maps for others to follow and pioneered the self-help/self-healing publishing industry.  She is thriving and has found joy.

2 responses to “Louise L. Hay: You Can Heal Your Life”