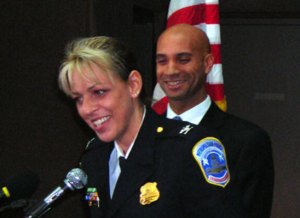 Being a single mom at age 15 and also a high school dropout,
it teaches you things about life that no other experience can.
I could have easily gone down the wrong path.
– Chief Cathy L. Lanier
Washington, DC Police Chief Cathy L. Lanier was 39 years old when she was named top cop by Mayor-elect Adrian M. Fenty.  She has a solid record of achievements and an stellar list of credentials.  She had first impressed Mayor Fenty when they worked together in DC’s 4th Ward.  He told CNN:
We have the best police chief in the country.
The odds were stacked against Chief Lanier.  Her father, the late Walter Lanier Sr., (who became deputy chief of the Prince George’s County, MD, fire department) abandoned his family when Chief Lanier was four years old.  When she was fourteen, she got pregnant and dropped out of high school and got married.  Her husband tried to block her quest to complete her education.  She was sexually harassed.  The DC police force is 63% Black and 76% male. 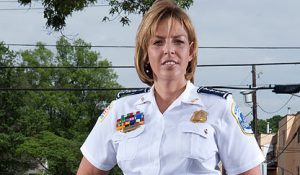 I know that a single positive mentor in someone’s life can make all the difference.
– Chief Cathy L. Lanier
Chief Lanier credits her mother:
My mother could have given up on me when I didn’t make the decisions that everyone else thought I should, but she didn’t, and that’s when I learned that compassion, understanding, and patience would be the most important characteristics that I employed in my chosen profession.  My greatest strength as a police officer is my ability to relate to anyone, no matter their background.
Her mother, Helen Lanier, worked as a legal secretary and helped rear her grandson.  Chief Lanier divorced her son’s father, completed her GED at age 16, went on welfare, and got odd jobs to fund her education.  She took advantage of the police department’s tuition reimbursement program to get a bachelor’s and a master’s degree from Johns Hopkins.  She’s had leadership training at Harvard, a master’s from the Naval Postgraduate School, and is a graduate of the FBI Academy.
She’s a beat cop at heart, and she is a results-oriented leader.  Officer Raymond Hawkins told Parade:
She knows what it’s like to walk the pavement.  She hears crime stats all day long, but what she really wants to know is, “How’s it going on your beat?”  She’s very approachable.  But if you go to her with a problem, you’d better have a solution, too.  She’ll give you resources if you have an answer she thinks will work, but having no solution is unacceptable to her. 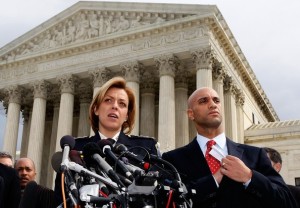 She is a person who can draw a line in the sand that she won’t cross.
– Mayor Adrian M. Fenty

When her boss sexually harassed her, she teamed up with a colleague who had also been harassed.  They filed suit against the police department.  Their lawsuit was settled out of court.  Each received $75,000.  She told Parade:

Back then, the culture dictated that it was okay to make explicit sexual comments and have inappropriate contact with female officers.  I brought a lawsuit with the goal of changing that culture and hopefully helping others going through the same thing.

It’s exceedingly tough for a woman in a predominately male profession to prevail in cases of sexual harassment.  Chief Lanier, however, was prudent.  Most predators have more than one prey.  When they stick together, it is more difficult to sweep their claims under the carpet.