The late Katharine Meyer Graham was one of the most powerful women in America.  She ran the Washington Post media empire.   After it exposed Watergate, President Richard Nixon resigned, and the paper won a Pulitzer Prize.  She won another Pulitzer for her autobiography, Personal History.  Her mentor was Warren E. Buffett, who was one of the first to invest in the Washington Post when the company went public.

Her father, Eugene Isaac Meyer, came from a distinguished Jewish family in Alsace-Lorraine, France.  His sister Rosalie married a nephew of Levi Strauss.  His father was a partner in Lazard Frères.

Her mother, Agnes Ernst, came from a long line of Lutheran ministers from Hanover, Germany.

Mr. Meyer bought the Washington Post at a bankruptcy auction in 1933 for $825,000 ~ he had offered $5 million five years earlier.  Her descriptions of her parents’ thriftiness and her father’s business acumen explain why she was so comfortable with and trusting of Mr. Buffett.

Ms. Graham’s autobiography is surprisingly candid.  Although her family was extraordinarily wealthy, she experienced the narcissistic neglect that is common for children of ambitious parents:

My difficulties were much more tied to a lack of guiding personal relationships, for I had more or less to bring myself up emotionally and figure out how to deal with whatever situations confronted me. . .The only person who was physically affectionate with me was Powelly [Margaret Ellen Powell, a Christian Scientist practical nurse], whom I emotionally outgrew when I was about seven.  From then on I was on my own. . .

During my childhood. . .my parents were mostly absent. . .

I had to learn from life, from bumping up against reality or from my friends. . .my mother should have been a role model. . .but she had made her own daughters feel inferior to her. . . 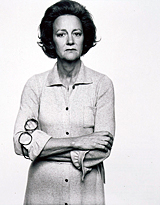 Perversely, I had seemed to enjoy the role of doormat wife.
– Katharine Graham

Despite her enormous professional success, she was plagued by insecurities planted in her psyche by her self-absorbed mother and reinforced by her husband Phil Graham, who was manic-depressive, abusive, and unfaithful:

. . .when he drank too much, after which ~ almost inevitably ~ a rather violent quarrel would ensue, followed by abject apologies and diminished drinking. . .Whenever I saw the drinking begin, I started to freeze; dreading the inevitable fight. . .The fights were never in public ~ the rage would explode after we had left a place and was usually about nothing substantive, nothing concrete. . .he seemed to seize on something as an excuse to vent his rage. . .I never suspected that Phil was either ill or depressed. . .

My insecurity had something to do with both my mother and Phil.  My mother seemed to undermine so much of what I did, subtly belittling my choices and my activities in light of her greater, more important ones. . .As for Phil, at the same time that he was building me up, he was tearing me down. . .I was still so mesmerized by him that I didn’t perceive what was happening, and even played along with it. . .superior attitude that he shared with my mother.

On Christmas Eve, 1962, Mrs. Graham discovered her husband was having an affair with Newsweek’s Robin Webb.  The couple separated, and Mrs. Graham was terrified she would loose the Post.  She decided to fight for her legacy, and her mother was “very supportive.”  On August 3, 1963, Mr. Graham shot himself at the family’s retreat Glen Welby.  She was on her own:

Sometimes you don’t really decide, you just move forward, and that is what I did ~ moved forward blindly and mindlessly into a new and unknown life.

On September 9, she was elected president of the Washington Post Company:

I saw my job now as that of a silent partner. . .a bridge to my children. . .I naïvely thought the whole business would just go on as it had while I learned by listening. . .nothing stands still. . .I didn’t understand the immensity of what lay before me. . .how tough it was going to be. . .Nor did I realize how much I was eventually going to enjoy it all.

What I essentially did was to put one foot in front of the other,
shut my eyes, and step off the edge.
The surprise was that I landed on my feet.
– Katharine Graham
When she became publisher in 1969, she didn’t feel confident:
I seemed to be carrying inadequacy as baggage. . .I still felt like a pretender to the throne. . .on trial. . .always taking an exam and would fail if I missed an single answer. . .my insecurity. . .stemmed from the narrow way women’s roles were defined. . .a trait shared by most women in my generation. . .brought up to believe that our roles were to be wives and mothers. . .put on earth to make men happy. . .assumption. . .women were intellectually inferior. . .this kind of thinking. . .took its toll:  most of us became somehow inferior. . .remained largely silent. . .exaggerated desire to please. . .inhibited my behavior. . .the only reason I had my job was the good luck of my birth and the bad luck of my husband’s death. 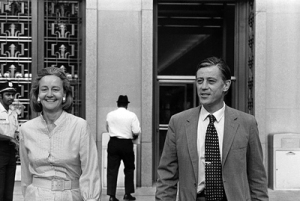 When the Watergate story landed on her desk, however, she had the courage, integrity, and strength of character that most publishers lacked:

I was extremely torn. . .I took a big gulp and said, “Go ahead, go ahead, go ahead.  Let’s go.  Let’s publish.”  And I hung up. . .the decision was made.
Pres. Nixon’s press secretary, Ron Ziegler, infamously minimized Watergate as “a third-rate burglary.”  I vividly recall this moment in history because Mr. Zeigler’s parents were my next-door neighbors.
John Mitchell viciously and offensively threatened Carl Bernstein:
Katie Graham’s gonna get her tit caught in a big fat wringer if that’s published.
In 1975, one of my colleagues at Seyfarth, Shaw, Fairweather & Geraldson [a labor law firm] paraphrased the comment when he heard that her pressmen had destroyed her presses during a bitter labor dispute.  Mrs. Graham ultimately prevailed, and the newspaper business was forever changed.
Mrs. Graham passed away on July 17, 2001.  Mr. Buffet eulogized that she deserved a Pulitzer in management.  I would agree. 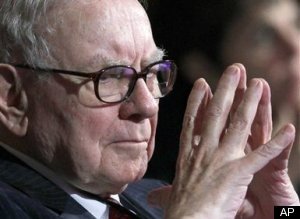 Katharine Graham told her story far better than I can. . .What I can add, however, is some perspective on her managerial career gained from a ringside view, which I was lucky enough to have for many years.  Kay’s business odyssey was unique.  She became responsible for the company’s operations in 1963, painfully unsure of herself, but totally sure of her principles.

She had been taught all her life — wrongly — that only men possessed a managerial gene.  But she also understood completely — and correctly — that independent and first-class journalistic institutions are key to creating and preserving a great society.  When the obligation to manage such an institution was thrust upon her by her husband’s death, she felt she had no choice but to march forward — however loudly her knees might be knocking.

And how she marched!  The Pentagon Papers and Watergate are milestones in journalistic history that will be recalled and studied for centuries.  But these heralded journalistic successes were matched as well by quiet business success.  On June 15, 1971, The Washington Post Company went public at $6.50 per share (adjusted for a subsequent 4-for-1 split).  When Kay stepped down as CEO on May 9, 1991, the price was $222, a gain of 3,315 percent.  During the same period the Dow advanced from 907 to 2,971, an increase of 227 percent.

This spectacular performance — which far outstripped those of her testosterone-laden peers — always left Kay amazed, almost disbelieving.  She was never quite sure where debits and credits belonged and couldn’t shake the feeling that the lack of an MBA degree destined her for business failure.

Of course, none of that mattered at all.  For Kay understood the two most basic rules of business: First, surround yourself with talented people and then nourish them with responsibilities and your gratitude; second, consistently deliver a superior, ever-improving product to your customer. Among journalistic leaders, no one carried out either task better than she.  The consequence was outsized profits.  Indeed, if we look at newspaper and television profit margins on what I would term a “quality-adjusted” basis, she took The Washington Post Company from near the bottom straight to the top. . .

When Gloria came to me for funds to start up Ms. magazine,
I put up $20,000 for seed money to help her get going.
– Katherine Graham

She survived.  She thrived and found joy.  She made history.