There is a little bit of Precious in all of us.
– Lee Daniels
What do you do when your dreams of becoming a Hollywood filmmaker are dashed upon the rocks and even your own mother thinks you’d be more successful if you were more like Tyler Perry?
If you are Lee Daniels, you take a bullshit job as a receptionist at a nursing temporary agency.  You work your butt off and start your own agency which you sell for $2 million.  You leverage your expertise to become a casting director and to manage Hollywood talent.

At the end of the day, I’m a promoter.
But I also let the work speak for itself.
– Lee Daniels
Then, you invest the money in your own production company (Lee Daniels Entertainment) so you can produce and direct quality independent films.  You persuade a top actress (Halle Berry) to work in your first film for peanuts, and she becomes the first Black actress to win a best actress Academy Award (Monsters’ Ball, a film that Mr. Daniels made for $2.5 million that earned $31 million).  The script of your next movie reminds you of the sexual molestation you experienced at age 12 (The Woodsman); it gets mixed reviews and is a box office bust.
In the meantime, literary agent and abuse survivor Charlotte Sheedy gives you a book about incest and child abuse  (PUSH) that you love, and you relentlessly stalk the author (Saffire) until she agrees to grant you the movie rights.  The heirs to the Celestial Seasonings and TCI cable fortunes give you $12 million to make the movie. 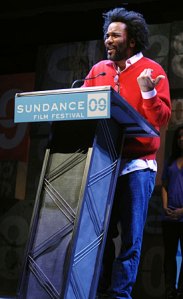 Your movie (Precious) wins three awards at Sundance which Mr. Daniels told Philadelphia Weekly shocked him:
When we got into Sundance I was like “whoa!”  When we won Sundance, I was like “what the fuck!”  All these white people were responding to my movie and I broke down in tears because you realize that this is not a black story.  I’m a black filmmaker but this is not a black story.
This Chinese lady came up and held my hand and started crying.  I didn’t know how to deal with it.  I still can’t deal with it because I made this film for my family and it becomes universal.

Lee Daniels with daughter Clara at the Academy Awards

You decide maybe it is time to cut off the dreadlocks.  Your success captures the attention of your mother’s (Clara Daniels) favorite producer (Tyler Perry) and he calls up his pal (Oprah) to suggest they become executive producers.  Oprah calls you while you are hearing that Precious won a third award at Sundance.  You can’t even dream that it will ultimately win Golden Globe, SAG, and Toronto Film Festival awards, get a 15-minute standing ovation at Cannes, and will be nominated for six Academy Awards including Best Picture.  At this point, you don’t need Hollywood anymore because you have your own production company and everybody wants you to be their producer.

There’s something about women . . . I feel for the injustices.
– Lee Daniels
Child Abuse Survivor Heals and Learns Self-Love
Mr. Daniels survived violent physical abuse by his father William Daniels, a New York City cop and bodyguard for Muhammad Ali.  This is why PUSH had such a profound impact on him:
When I read it, it ripped me open. It ripped me raw. . .
It left me in a place where my guts were upside down.  My mouth was open.  Every other page was like, “Oh my God this isn’t happening. I’ve got to turn this into a movie.”

He told Vanity Fair that his father couldn’t handle the fact that he was gay:

My dad wanted me to be a strong man, and I was walking downstairs in my mother’s red high-heeled pumps.  He couldn’t beat it out of me. . .I made this movie to heal ~ and hopefully to heal others.

This brutal man fortunately instilled a love of literature in his son.  The elder Mr. Daniels was murdered during an armed robbery at a bar when his son was 15 years old.

It’s hard for me to accept love.
I wish I could lie to you and tell you that it’s easy for me, but it’s not.
– Lee Daniels
Survivors Collaborate
I’m fascinated that by the fact that Mr. Daniels’ career success springs from a collaboration with other abuse survivors including:  Halle Berry, Mo’Nique, Tyler Perry, Oprah Winfrey, Maya Angelou, Eve Ensler, and Charlotte Sheedy.  They believe that books like PUSH and films like Precious can transform lives.  Mr. Daniels told CNN that directing the film proved to be a healing balm for the trauma he had experienced:
I wanted to heal.  I wanted to not have nightmares anymore, think of my friends who passed away in peace and let that go, and Precious has done that for me.
Mr. Daniels told Philadelphia Weekly that he knew it would impact millions:
That truly was my intention, to change how one perceives incest.  We see Precious in Philly every day on the El, on the bus, 42nd Street to everywhere.  She’s there.  She’s with my cousins.  She’s deep in my family.  She’s everywhere, but we are ignoring her.

He also believes the film has universal appeal because it teaches people self-love:

[Child abuse is] part of the film, and it’s certainly something that I identify with.  But through the abuse and through the darkness, I actually identify more with the sense of loving yourself, of finding self-love and ultimately loving yourself.  That’s what I identify most with, because it took me a long time to love myself and not be so hard on myself.  That’s what makes the movie not just a black film, but a universal story.

The ripple effect inspired Mr. Perry to tell Oprah about his own incest experience.  They collaborated on a powerful two-day show featuring 200 male incest and sexual molestation survivors.  Along the way, Oprah (who also experienced incest) revealed that her weight issues were directly linked to her grandmother’s physical abuse. 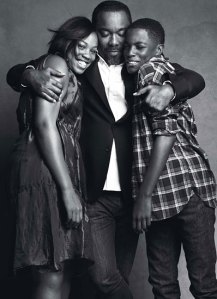 He adopted his brother’s twin children when they were three days old.  Clara and Liam are now teenagers, and Mr. Daniels shares custody with his former partner Billy Hopkins.  He is in a committed relationship with Andy Sforzini, an actuary at Prudential Life Insurance.  They live in Manhattan.

Mr. Daniels’ next project is Valley of the Dolls for NBC.  You can read more about Mr. Daniels in “The Audacity of Precious,” a New York Times Magazine cover story.

He survived.  He’s thriving and has found joy.