I bought Practical Magic by Alice Hoffman because I was entranced by the movie starring Sandra Bullock and Nicole Kidman.   The first section of the book ~ Superstition ~ is so boring that I almost abandoned the book just when it was about to get good.
Superstition
Sally Owens [Sandra Bullock] and her sister Gillian [Nicole Kidman] are orphans sent to live with their eccentric aunts in Massachusetts.  Sally is the high-achieving good girl, and sexy Gillian breaks hearts up and down the East Coast.  The locals reject them as witches. . .until they sneak up the bluestone path to the back door to enhance their love lives.  Ugh.  The first 62 pages in a nutshell:
Sometimes, when she was feeling particularly nasty, Gillian would suddenly turn and shout “Boo,” and some boy always pissed in his pants.
. . .a baby was easier to prevent than to raise. . .
Goodness, in [the aunts’] opinion, was not  a virtue but merely spinelessness and fear disguised as humility.
After Sally’s husband Michael is accidentally killed, she goes into a funk for a year.  Gillian faithfully calls every week to try to bring her out of it.  At the end of the year, Sally packs her two daughters Antonia and Kylie up and heads for Long Island.

On page 75, the plot finally kicks in:

A halo around the moon is always a sign of disruption. . .a double ring, all tangled and snarled. . .anything can happen. . .Trouble is just like love. . .it comes in unannounced and takes over. . .

Gillian shows up on Sally’s porch with her bad-boy, abusive boyfriend Jimmy’s dead body parked in his Oldsmobile:

Gillian is convinced she’s killed Jimmy.  The sisters bury him under the lilacs which start blooming profusely ~ out of season ~ in July.  Gillian gets a job at the Hamburger Shack and charms the local teenage boys as well as her niece. 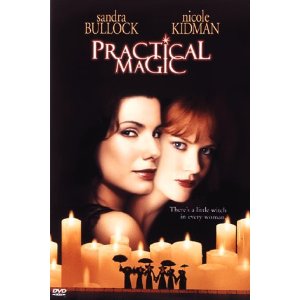 If a woman is in trouble, she should always wear blue for protection.

Work. . .Hell with a paycheck.

All hell breaks loose in the last sections of the book.  Jimmy’s ghost refuses to stay buried beneath the lilacs.  And, we hear about the family matriarch Maria Owens, who mysteriously arrived in Massachusetts with a baby girl, a satchel, and a packet of diamonds:

. . .she never backed down or valued anyone’s opinion above her own.

The book is a delightful blend of magic, romance, and mystery swirling around a core of domestic violence.  It seems everyone is happy that Jimmy is dead.  He was mean and selfish:

But, he doesn’t win in the end.  Sally and Gillian’s victories are practical magic.