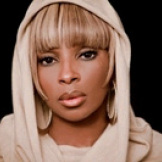 you don’t have to be ashamed.

Mary J. Blige is empowering women with this message in her music, her interviews, and at the new Mary J. Blige Center for Women in her hometown of Yonkers, New York.  The Center is a sanctuary for physically and emotionally abused women.  It provides a network of support and services including psychologists, doctors, day care centers, and scholarships.  Ms. Blige intends to expand the concept from her home base to the world:

It starts here.  I can’t start in Africa because we need help here.  Women are suffering all over the world.

She and Steve Stoute founded the Foundation for the Advancement of Women Now (FFAWN) “to inspire women from all walks of life to gain the confidence and skills they need to reach their individual potential.”  Their web site is loaded with information to help visitors achieve Ms. Blige’s daily mantra:

You will never feel more alive than when you live the dream God created for you.

Ms. Blige’s jazz musician, abusive father abandoned the family when she was four.  The family moved to Yonkers:

We lived in the ghetto.  I never saw a woman there who wasn’t abused.  You look at the way your mother is being treated and you think this is the way you’re supposed to be treated.

I was surrounded by drug dealer chicks who spent their money on cars and clothes.  The people I knew sat around drinking and cursing and living in denial.  These were my role models.  Life was about surviving ~ getting money any way you could.

Mary J. was molested by a family friend when she was five years old.  The only place she felt safe was at church.

“Everyone around me was looking for a quick paycheck.”

Her music career was launched by Sean “Puffy” Combs.  She had a series of abusive relationships including K-Ci.  In an interview with the New York Times in 2007, she talked about her autobiographical album My Life:

Mary. . .always cared about people more than she cared about herself.  And she would give so much away to people.  And no one would give her anything back.  And it would hurt her really badly.

I was crying out for help.  I was saying:  “Somebody help me.  I’m about to end it all.”  Not with slitting my wrists or taking pills, but whatever drug, whatever alcohol, whatever I could do.  I’m about to slowly start the process of ending it all.

In a 2007 Parade Magazine interview she described her life in the valley:

I wanted to find real love, but it was a far-fetched dream because of all the dream-smashing going on around me.  . .gun put to my face. . .depending on [guys] to make me feel good, and it turns out they hate themselves too. . .I couldn’t even love myself.

Do you really want to know what this girl’s been through?  I’ll tell you:  Hell, literally.

I never had anybody who cared for me.  None of my boyfriends loved me or even liked me.  The people hanging around me used me, put my money in their pockets, pushing drugs, alochol.  But real love?  That’s a beautiful thing when you find it.

After hip-hop star Aaliyah was killed in a plane crash shortly before 9/11 in 2001, Ms. Blige’s life was transformed by love.

At the 2006 Billboard Awards, Ms. Blige’s prayers were answered when she met talent manager Kendu Isaacs.  She says he saved her life:

Although I was trying to kill myself, I didn’t want to die.

It was during the No More Drama album when I realized:  if I don’t do something, I’m not going to be here anymore. . .I prayed and asked God to send me someone to help me.

He’s a great man ~ very smart and full of love, because his parents gave him love. . .I began to trust and have faith.

It’s like you have a cut, and it’s infected.  You have to let me put proper medicine on it so it can heal.

But, it wasn’t smooth sailing:

I treated him so badly for a while, because I’d never experienced real love before.  I was suspicious.

The couple married in a small, private ceremony at her estate in New Jersey on December 7, 2003.  Her music, her fan base, and her circle of friends shifted toward freedom.  She told Oprah in 2006:

No one is going to give you anything for free. . .My breakthrough came when I stopped feeling sorry for myself and took responsibility for every part of my life.  No more pity parties.  I’ve gotta love me more than anybody else loves me.

. . .I went from cocaine to hard liquor to wine.

After the No More Drama album, people came up to me and said, “You saved me.  You talked me out of an abusive relationship”. . .That’s why I know I need to tell people what’s really going on.

A lot of people hate me for this.  People say things like “Mary, I liked it better when you were singing them sad songs.  You need to pick up a pack of cigarettes and come back down with us”. . .They just want someone to waddle with them in their enviornment.

. . .I gained many fans who were like, “How do we get free?”  Those are the people I want to reach.  In the hood, the minute someone steps up and fights the tough guy, he or she gets respect. 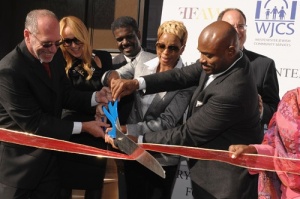 “We have to save each other.”

When Ms. Blige was a little girl living in the projects, she dreamed of coming back to her old neighborhood to protect and empower women.  On the day her Center opened, she told CNN:

She’s sharing the wisdom she’s learned and the confidence it has given her:

Don’t be defined by what your circumstances are.  Free your energy up.  Don’t think that money or being able to pay your bills makes you who you are.  God made you the way you are, so don’t let not having money take that away.

Believe in yourself no matter what, no matter who doesn’t like you or doesn’t want to support you.  Believe and love yourself.

Patience is mandatory.  I know loving myself is bigger than any love anybody could ever have for me.  I know that if I don’t have confidence in me, and in what I do and who I am, nobody else will.  I know that.

Today, Mary J. Blige is secure in her own skin.  She believes that fame means she must remain humble and grateful.  She’s discovered that she’s a leader and a fighter.

With her new album Stronger with Each Tear, she wants people to know that it is OK to cry.  On the Today Show this week, she told Kathie Lee and Hoda:

I have forgiven myself for things that I know I didn’t do and things I can’t change ~ I am not beating myself up anymore and I am not allowing anyone to beat on me mentally about anything.  I am giving Mary some love, giving Mary a break, laughing with Mary, crying with Mary ~ whatever ~ and telling her that I love her.

When she was younger, she was depressed like Precious in the movie.  This is what the lyrics to “I Can See a Color” mean to her:

When you are depressed, everything is in black and white.  You don’t even realize it is a sunny day.  Now, I can see in color because I am constantly working on myself.  I have chosen life like Precious chose life.  It is hard.  It is a job.  It’s not like “OK, I’m all well.”  No, I am not.  I am well because I want to do better and I want better for myself.

2 responses to “Breaking Down the Wall of Silence: Mary J. Blige”