Jenny Sanford changed forever the paradigm of women standing by their powerful, cheating husbands.  She believes they need to be held accountable.  I agree.  I don’t think Tiger Woods would have apologized some 14 times to his wife Elin if it hadn’t been for Jenny Sanford.

She kicked her narcissistic, emotionally and financially abusive, self-absorbed, cheap, cheating husband Mark (governor of South Carolina) to the curb.  She didn’t bail him out when he asked for her help on how to save his sorry behind with the press.  Instead, she packed up the kids and moved to their beach house on Sullivan’s Island near Charleston, S.C.  She had hoped that rattling around in an empty governor’s mansion might help him get his priorities and values straight.

hurt your self-esteem or your own sense of self.

Revenge or Mission to Inspire?

Reviewers of Jenny’s best-selling memoir Staying True suggest she’s out for revenge.  I don’t agree.  That’s not her style.  I think Time got it right:

Hers is not the story of a dull wife who was passed over for an exotic woman in Argentina, but rather the tale of the true captain of a family ship, unbowed by the squalls.

. . .she has apparently concluded ~ correctly so ~ that the person who is humiliated by her husband’s affair is, in fact, her husband, not her.  And so she is not standing by his side, but she is not hiding in a hole, either. . .

Wow.  Maybe this is a new role model for all wronged spouses, not just political ones.

CNN reported that Jenny phoned several key political allies and urged them not to call for Mark’s impeachment ~ “maneuvering that may have saved his job.  That detail goes unmentioned in the book.”

Jenny’s dignity comes naturally to women from the society families of Chicago’s North Shore.  It is a milieu I understand well.  Marriages are often more financial merger than romantic relationship.  Men tend not to be faithful, and their wives are conditioned to bear it with locked-jaw grace.

Integrity, strength of character, and hard work were instilled by her parents and grandparents.  She is heiress to a family fortune founded in the Skil Corporation, the Milwaukee Braves, and the Winston & Strawn law firm.

She received her degree from Georgetown in finance before a high-powered investment banking career at Lazard Freres & Co. as vice-president of mergers and acquisitions with a focus on media and communicaitons companies.  During a Memorial Day, 1987 beach party at the Hamptons, she met her future husband.  As they cut their wedding cake, I’m sure she was dreaming of an enduring, loving marriage like her parents and grandparents enjoyed:

. . .loyalty was at the root of good marriages. . .loving them warts and all.

I did think we were a good team.

Marriage is a vow of faithfulness and fidelity.

In many respects, I got the sense that Jenny’s biological clock was ticking, and the men in her dating pool were more cad than great father material.  It was sobering to read that a woman with her pedigree, beauty, and money would find herself kissing a bunch of toads and settling for a mediocre man.

That’s why I can fully appreciate why she chose to ignore the red flags that littered their relationship.  Perhaps she was like the proverbial frog being brought to a slow boil:

I had long since realized that marriage to Mark was not going to be all roses or romance.  Certainly I didn’t always feel loved. . .I rationalized.

There’s nobody cheaper than this guy.

What Took Her So Long to Toss Him to the Curb?

Jenny, a devout Irish Catholic, clearly took her wedding vows quite seriously and invested heavily (emotionally as well as financially) in the relationship.  But, about half way through the book, I started wondering why?  She was clearly the brains on their team.

Perhaps she had acclimated herself too thoroughly into the culture of South Carolina:

I have come to love South Carolina deeply, but I’m not blind to the challenges still in place for women there. . .an old-fashioned chauvinism that would have women stay out of positions of power or strength. . .they forget that South Carolina has plenty of strong and succesful women in its history.

I’m surrounded by the self-absorbed male.

Self-care and Planning the Family’s Future

My eyes were trained on the horizon too, but my vision of it was us at the beach. . .launching our four fine young men into the world.

I found myself starved for real friendship.  Many of our true friends were reluctant to call us because they assumed we were busy. . .All I wanted was the company of real friends instead of the tiresome busyness and loneliness that came with the job and the house.

Jenny was lucky.  Although she was frequently isolated from friends and family due to the demands of Mark’s job, they were exceedingly loyal ~ especially Mark’s friends Cubby and Lalla Lee Culbertson.  A Washington, D.C. friend gave her counsel:

Jack understood men in power well. . .I needed to resist the urge to rant or get back at Mark. . .I should hand these hurts to Jack, who would confront Mark. . .Jack backed me up. . .I left the punishment up to someone else.

I didn’t want to make a rash decision that would bring down Mark’s career. . .I was thinking of the boys, who didn’t deserve this.

Jenny drew strength from her faith as well as her mother Susan’s (a 25-year-cancer survivor) example:

My mother never let the challenges of life divert her from her main goals. . .my mother’s persevering spirit.  As the only survivor of an experimental cancer treatment program twenty years ago, she is an inspiration to me today because of her positive spirit.  She was a warrior in the face of certain death. . .She never wanted to appear as if she was just about to die.  She has her sights set on living. . .enjoying every minute.

An Old Testament woman with a 170 IQ.

Back to the Beach and Sullivan’s Island

Jenny wrote extensively in her journal and meditated each day on Bible verses:

I felt a peace that came from knowing that I had acted in the best manner I knew possible in this marriage, I had loved to the best of my ability. . .

Rarely is forgiveness instinctive.  Forgiveness has to be learned, and even practiced. . .

Holding a grudge takes time and energy. . .The more I let go, the freer I felt.

Yet I was not at all free from the kind of hurt Mark had inflicted.  He had lied right to my face and gone to see his lover. . .deceived me, disregarded my emotions, my needs, my desires, my basic integrity. . .I walked the beach and reminded myself daily and joyfully of who I was and how I had been blessed. . .

Saying “I forgive you” is not the same as saying “what you have done is okay.”  If I continued to deny Mark my forgiveness, I would remain entangled in his emotions. . .He was supremely self-absorbed. . .not concerned about my feelings.  I had become an abstraction to him, an obstacle. . .Forgiveness, then, was for me. . .

Forgiveness. . .gave us the freedom to move forward happily, free from our unfortunate situation.

Ultimately, she realized she had to tell her sons about their father’s affair because she didn’t want them to learn it from the press or via rumor.  Her son Bolton responded with true Irish humor:  “This is going to be worse than Eliot Spitzer!”  She wanted her boys to learn:

. . .you may choose your sin but you cannot choose the consequences. . .dishonesty rarely serves one well, and it is always better to “walk in the truth.”

I hope they learn, if you treat your wife poorly, sometimes you might lose your wife.  So, character and integrity matter. 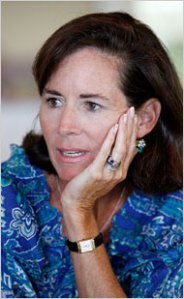 Not only will I survive, I’ll thrive.

The Rhythm of the Ocean Soothed Her Soul

Gradually, their lives settled into a routine.  She finds joy every day:

Nothing rejuvenates my spirit more than a walk along the shore. . .feel closer to God. . .difficult to feel anger or to wallow in my suffering. . .put my life in perspective. . .I can hear the beach calling to me. . .I release. . .Daily chores. . .distract me. . .

I will persevere with my feet firmly planted ~ preferably with some sand between my toes ~ focused on my priorities and looking onward and every upward.