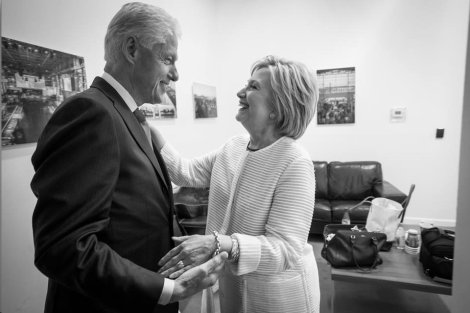 In 1974, Hillary Clinton was part of the team of attorneys who proposed three articles of impeachment against former Pres. Richard M. Nixon.  He resigned on August 9, 1974, and the GOP vowed revenge.

If you weren’t around in 1974, this is Mrs. Clinton’s nutshell account in her memoir, Living History:

It was obvious. . .Nixon was going to trounce McGovern. . .dirty tricks to help ensure a Republican victory.  A botched break-in at Democratic Committee offices at the Watergate complex on June 17, 1972, would lead to the downfall of Richard Nixon.

. . .three articles of impeachment citing abuse of power, obstruction of justice and contempt of Congress. . .included paying off witnesses to silence them or influence their testimony, misusing the Internal Revenue Service to obtain the tax records of private citizens, directing the FBI and the Secret Service to spy on Americans. . .

If the wife comes through as being
too strong and too intelligent,
it makes the husband look like a wimp.
– Richard M. Nixon

My service on the 1974 impeachment staff aside, I suspected that Nixon understood better than many the threat Bill posed to the Republican hold on the Presidency.  He probably believed that denigrating Bill because he put up with an outspoken wife, and vilifying me as “unbecoming,” might scare voters anxious for a change but uncertain about us.

A protester at the anti-impeachment rally in Washington, D.C. who got it right.

I was beyond livid when Pres. Bill Clinton was impeached.  I thought the only person who had the right to kick his behind out of the White House was Hillary, and I would have helped her pack him up.  She endured the Lewinsky scandal with more grace and dignity than I would have been able to muster.

The bullshit about the “Framers’ Intent” had my head exploding.  The U.S. Constitution was framed in a whorehouse belonging to Betsy Ross.  Meanwhile, nerdy James Madison penned the document across the street at Constitution Hall.  The sexual exploits of our country’s Founding Fathers ~ George Washington, Thomas Jefferson, and Benjamin Franklin ~ have been well-documented.  Quite frankly, if we kick every cheating spouse out of D.C., somebody would have to come in and turn off the lights.  I don’t approve, but I do accept reality.

Rep. Denny Hastert (R-IL) was Speaker of the House and a family values politician.  He took the lead in Pres. Clinton’s impeachment.  I wasn’t surprised that decades later he was sent to prison for trying to cover-up his penchant for pedophilia. 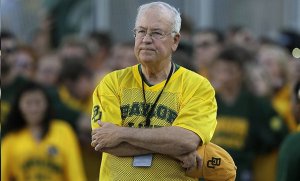 It seemed like a good match:
a conservative son of a Christian minister
at an august private Baptist university.
With strong policies against drinking and premarital sex,
Baylor has an enthusiasm for Jesus
matched only by its passion for football.
– Mimi Swartz, New York Times, 6/27/16

Meanwhile, according to an attorney intimately involved in the case, Ken Starr was leaving his own pecker tracks in Chandra Levy’s apartment.  Apparently, former Rep. Gary Condit (R-CA) was offering it up to his married GOP buddies as a place for their own extra-marital affairs.  There is some speculation that Ms. Levy was murdered because she was about to blow the whistle.

We do know that Ken Starr, as chancellor of Baylor University, helped cover up accusations of sexual violence by several football players and a fraternity president.  He was ultimately fired but was allowed to remain at Baylor as a law professor.

He wasn’t so shy during the impeachment process.  After the Whitewater investigation failed to surface criminal conduct, Mr. Starr seized evidence of Pres. Clinton’s pecker tracks on the dress of a White House intern.  He knew the president would likely lie about being unfaithful.  Bingo!  He could make a case for obstruction of justice and perjury.  Oh, sweet Karma!  Mr. Starr could be the GOP’s hero for extracting revenge on Hillary Clinton for her role in Nixon’s impeachment.

Sam Dash, who participated in impeachment investigations of Nixon and Clinton, accused Mr. Starr of abuse of power because he “unlawfully intruded on the power of impeachment.”  In his resignation letter, Dash stated that it went beyond Mr. Starr’s “narrow duty” under the law to “objectively” give the House substantial and credible information that may constitute grounds for impeachment.

FBI director Jim Comey was a Whitewater deputy special counsel.  He became the GOP’s go-to guy when they wanted to launch a bogus, politically-motivated “investigation” to smear the Clintons.  He investigated the pardons Pres. Clinton made during his last days in office.

He took charge of the FBI’s e-mail investigation into Secretary Clinton’s private server.  Although he and his team went to extraordinarily inordinate lengths to dig up dirt, they came up virtually empty.  Again.

When I was in law school, we learned early how to make a mountain out of a molehill if our client had a lousy case.  This is exactly what Mr. Comey did.  Secretary Clinton had 30,000 e-mail messages on her server.  Of these 30,000 messages, 110 classified and 8 top secret messages slipped through the cracks.

It was Mr. Comey’s job to determine criminal intent.  Period.  Like Ken Starr before him, he inappropriately interjected himself into the prosecutorial process by not limiting his input to objective information.

He couldn’t deliver the indictment the politically-motivated  Benghazi committee wanted.  So, he opted to give them a sound-bite they could use over and over and over again to try to discredit Secretary Clinton’s campaign.

The GOP is launching an investigation of the FBI’s investigation tomorrow.  Enough already!  It is abuse of power and more waste of the taxpayers’ money.  Again.

Attorney General Loretta Lynch announced this afternoon that no charges will be filed against Secretary Clinton.  The case should be closed.  Will it be?  Probably not.

One response to “Why Does the GOP Hate the Clintons?”