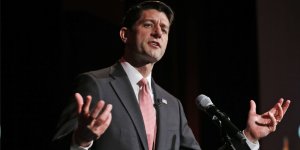 Who could’ve fathomed such horror as this?
– Paul Ryan

You could have, Speaker Ryan.

But, this week Speaker Ryan delayed a vote on gun control legislation.  It was more important to his partisan agenda to investigate the FBI’s investigation of Secretary Hillary Clinton’s e-mails.

The lives of Alton Sterling, Philando Castile, and five cops in Dallas don’t matter to Speaker Ryan.  He didn’t see the need for gun control.  He couldn’t foresee that ultimately a domestic terrorist would turn his assault weapon on police.  His allegiance to the NRA clouded his judgment.

The execution of Philando Castile by a Minnesota cop got to me.  He was slaughtered by a racist cop while trying to obey commands during a traffic stop for a damaged tail light.  I’ve experienced police brutality myself three times.  It was horrendous.  Yet, I probably survived simply because my skin is white.  Nobody should get gunned down for driving while Black.

What did I do wrong?
– Alton Sterling’s last words

Alton Sterling was just trying to make a few extra bucks to support his family by selling CDs.  Thank God the owner of the convenience store decided to make a video of his murder.  The cops who shot him at point-blank range were clearly intent on a cover-up.  Been there.  Didn’t have anybody to record the abuse of power.

Black Lives Matter protesters worked with the police department in Dallas.  Police Chief David Brown has worked tirelessly to curb police brutality.  Sadly, a veteran who had been planning a shooting rampage seized the opportunity to kill white cops.  He shot a dozen officers, and five didn’t survive.

Yet, he can’t bring himself to ban assault weapons.  At this juncture, there isn’t a cop or a Black person in this country who is safe.  Hell, none of us are safe.

The answer must not be violence.
– Attorney General Loretta Lynch

Today we’ve heard a lot of racist rhetoric ~ some blatant and some subtle ~ blaming the Black Lives Matter movement. These statements were made mostly by racist politicians who all have blood on their hands. The shooting rampages will continue until politicians like Speaker Ryan wake the hell up and find their integrity.

My sense is that he doesn’t hold Donald Trump accountable for his racist rhetoric because in his heart he is a closet racist.  Mr. Trump ignited the match and fanned the racial hatred which became a conflagration in Dallas.  Black Lives Matter is a lesson Speaker Ryan and Mr. Trump will learn in November.