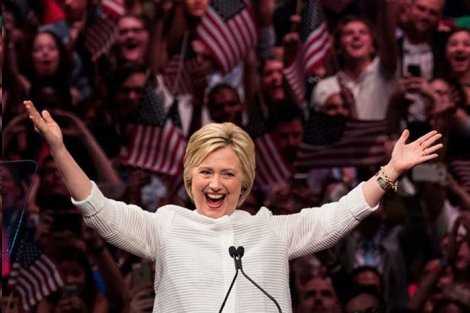 If we stand together, we will rise together.
– Hillary Rodham Clinton

Last night I popped the cork on a bottle of champagne and watched Hillary Rodham Clinton’s victory speech in Brooklyn.  It started with an epic “History Made” video.  As I watched, I realized we’ve finally come a long way, baby.

In 2008, I will confess that I was a charter member of PUMA (party unity my ass).  We had ourselves one hell of a pity party on the issue of misogyny.  We bitched and groaned about the sexism we had experienced and the damned glass ceiling.  Hillary rallied us and gave us hope. 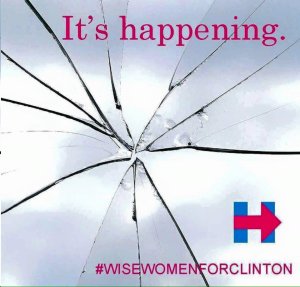 Although we weren’t able to shatter
that highest, hardest glass ceiling this time,
thanks to you, it’s got about 18 million cracks in it
~ and the light is shining through like never before,
filling us all with the hope and
the sure knowledge that the path
will be a little easier next time.
– Hillary Rodham Clinton, June 7, 2008

Yesterday on Facebook, Secretary Clinton said:
Because of you, for the first time in our country’s history, a woman will be a major party’s nominee for President of the United States. Tonight, we can say with pride that no matter who you are, where you come from, what you look like, or yes, what gender you are ~ in America, there is no barrier too great and no ceiling too high to break. 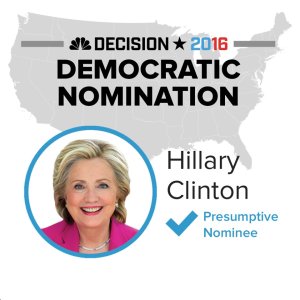 Here’s a transcript of last night’s speech, and you can watch it on YouTube:
I am so grateful to you.  It’s wonderful to be back in Brooklyn here in this beautiful building.  It may be hard to see tonight, but we’re standing under a glass ceiling right now.
But don’t worry.  We’re not smashing this one.  Thanks to you, we’ve reached a milestone:  the first time in our nation’s history that a woman will be a major party’s nominee for president of the United States.

Tonight’s victory is not about one person.

It belongs to generations of women and men who struggled and sacrificed and made this moment possible.  In our country, it started right here in New York ~ a place called Seneca Falls in 1848 when a small but determined group of women and men came together with the idea that women deserved equal rights, and they set it forth in something called the Declaration of Sentiments.  It was the first time in human history that that kind of declaration occurred.  So, we all owe so much to those who came before.  Tonight belongs to all of you.

I want to thank all the volunteers, community leaders, the activists and organizers who supported our campaign in every state and territory.  And thanks especially to our friends in New Jersey for such a resounding victory tonight.  Thanks for talking to your neighbors, for making contributions.  Your efforts have produced a strong majority of the popular vote, victories in a majority of the contests, and after tonight a majority of pledged delegates. 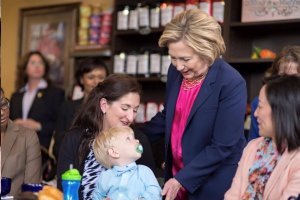 I want to thank all the people across our country
who have taken the time to talk with me.

I’ve learned a lot about you.  And, I’ve learned about those persistent problems and the unfinished promise of America that you’re living with.  So many of you feel like you’re out there on your own, that no one has your back.  Well, I do. 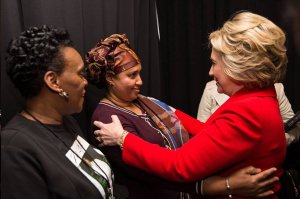 I hear you.  I see you.
And, as your president,
I will always have your back.
I want to congratulate Senator Sanders for the extraordinary campaign he has run.  He has spent his long career in public service fighting for Progressive causes and principles and he’s excited millions of voters, especially young people.  And let there be no mistake.  Senator Sanders, his campaign, and the vigorous debate that we’ve had about how to raise incomes, reduce inequality, increase upward mobility, have been very good for the Democratic party and for America. 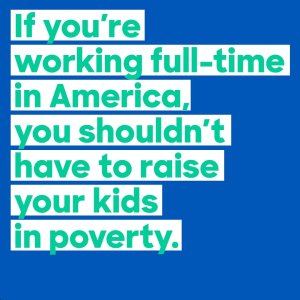 This has been a hard-fought, deeply-felt campaign.  But, whether you supported me or Senator Sanders or one of the Republicans, we all need to keep working toward a better, fairer, stronger America.  Now, I know it never feels good to put your heart into a cause or a candidate you believe in and to come up short.  I know that feeling well.

But, as we look ahead to the battles that awaits,
let’s remember all that unites us.
We all want an economy with more opportunity and less inequality, where Wall Street can never wreck Main Street again.  We all want a government that listens to the people, not he power brokers ~ which means getting unaccountable money out of politics.  And, we all want a society that is tolerant, inclusive, and fair. 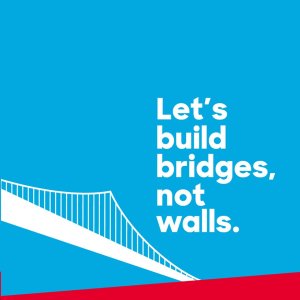 We believe that cooperation is better than conflict,
unity is better than division,
empowerment is better than resentment and
bridges are better than walls.
It’s a simple but powerful idea.  We believe that we are stronger together, and the stakes in this election are high, and the choice is clear.  Donald Trump is temperamentally unfit to be president and commander in chief.  He’s not just trying to build a wall between America and Mexico.  He’s trying to wall off Americans from each other. 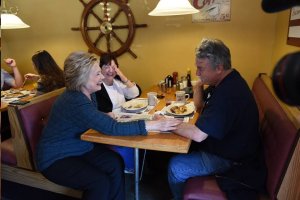 When he says “let’s make American great again,”
that is code for let’s take America backwards.
Back to a time when opportunity and dignity were reserved for some not all.  Promising his supporters an economy he cannot re-create.  We however, want to write the next chapter in American greatness with a 21st century prosperity that lifts everyone who has been left out and left behind including those who may not vote for us but who deserve their chance to make a new beginning. 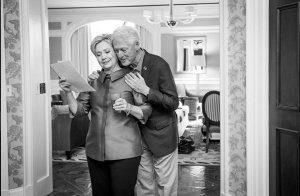 As a great Democratic President once said, “There is nothing wrong with America that can’t be cured by what’s right with America.”

When Donald Trump says a distinguished judge born in Indiana can’t do his job because of his Mexican heritage or he mocks a reporter with disabilities or calls women pigs, it goes against everything we stand for.

“To every little girl who dreams big: Yes, you can be anything you want ~ even president. Tonight is for you.” – Hillary Rodham Clinton

We want an America where everyone
is treated with respect and where their work is valued.
It’s clear that Donald Trump doesn’t believe we are stronger together.  He has abused his primary opponents and their families.  He attacked the press for asking tough questions, denigrated Muslims and immigrants.  He wants to win by stoking fear and rubbing salt in wounds and reminding us daily just how great he is.

To be great, we can’t be small.  We have to be as big as the values that define America.  And, we are a big-hearted, fair-minded country.  We teach our children that this is one nation under God, indivisible, with liberty and justice for all.  Not just for people who look a certain way or worship a certain way or love a certain way.  For all ~ indivisible.  This election is not, however, about the same old fights between Democrats and Republicans.  This election is different.

It really is about who we are as a nation.
It’s about millions of Americans coming together to say we are better than this.  We won’t let this happen in America.  And, if you agree, whether you’re a Democrat, Republican, or Independent, I hope you will join us.  In just a few weeks, we will meet in Philadelphia which gave birth to our nation back in that hot summer of 1776.  Those early patriots knew they would all rise or fall together.  Well, today that is more true than ever.  Our campaign will take this message to every corner of our country.

We’re stronger when our economy works for everyone ~ not just those at the top ~ with good-paying jobs and good schools in every zip code and a real commitment to all families and all regions of our nation.

“Let’s build an America that respects and embraces the potential of every last one of us.” – Hillary Rodham Clinton

We are stronger when we work with our allies and we’re strong when we respect each other, listen to each other, and act with a sense of common purpose.  We’re strong when every family and every community knows they’re not on their own.  Because we’re in this together.

It really does take a village to raise a child
and build a stronger future for us all.
I learned this a long time ago from the biggest influence in my life, my mother [Dorothy Rodham].  She was my rock from the day I was born until the day she left us.  She overcame a childhood marked by abandonment and mistreatment and somehow managed not to become bitter or broken.  My mother believed that life is about serving others.

She taught me never to back down from a bully
which it turns out was pretty good advice.
This past Saturday would have been her 97th birthday because she was born on June 4th, 1919, and some of you may know the significance of that date.  On the very day my mother was born in Chicago, Congress was passing the 19th Amendment to the Constitution.  That amendment finally gave women the right to vote.  And, I really wish my mother could be here tonight. 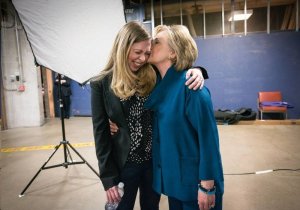 “I’ve been called many things by many people. ‘Quitter’ is not one of them.” – Hillary Rodham Clinton

So, yes.  Yes, there are still ceilings to break ~ for women and men, for all Americans.  But, don’t let anyone tell you that great things can’t happen in America.  Barriers can come down.  Justice and equality can win.  Our history has moved in that direction ~ slowly at times but unmistakably ~ thanks to generations of Americans who refused to give up or back down.

Now, you are writing a new chapter of that story.
This campaign is about making sure there are no ceilings, no limits on any of us, and this is our moment to come together.  So, please join our campaign.  Volunteer.  Go to HillaryClinton.com.  Contribute what you can.  Text JOIN to 47246.  Help us organize in all 50 states.  Every phone call you make, every door you knock on will move us forward.

Now, I’m going to take a moment later tonight and the days ahead to fully absorb the history we’ve made here.  But, what I care about most is the history our country has yet to write.

Our children and grandchildren will look back at this time ~ at the choices we are about to make, the goals we will strive for, the principles we will live by ~ and we need to make sure that they can be proud of us.  The end of the primaries is only the beginning of the work we’re called to do.  But, if we stand together, we will rise together.

We are stronger together.
Let’s go out and make that case to America.  Thank you!  God bless you, and God bless America.
Related posts: