One of the 888,246 poppies on display at the Tower of London

World War I ended on November 11, 1918 at 11:00.  It was billed as the war to end all wars.  Armistice Day celebrates the truce.  It has morphed into Veteran’s Day with the poppy as its symbol.

Memorial to a fallen WWI soldier

I put my hand up and see the land of red,
This is my time to go over,
I may not come back
So sleep, kiss the boys for me.
The Blood Swept Lands and Seas of Red,
a poem by an unknown soldier

Because it is difficult for most of us to wrap our heads around the millions of people who died during WWI, set designer Tom Piper created Blood Swept Lands And Seas Of Red.  Ceramic artist Paul Cummin and legions of volunteers created 888,246 hand-made, individualized poppies to serve as tribute to each British Commonwealth soldier who died during WWI.

Weeping Wall of poppies from the Tower of London

Every single poppy, every poppy you hold, is somebody’s life.
Lynne England,
volunteer and grand-niece of a WWI recipient of the Victoria Cross

On August 5, volunteers started the exhibit with a wave of blood-red poppies cascading from a window in the Tower of London.  This is the day fighting began in 1914.

They’re all handmade, and they’re all individual.
Arthur England, volunteer

Poppies were added each day by 8,000 volunteers until they filled the moat surrounding the Tower of London on November 11.

Lights were installed so that people could see it at night. 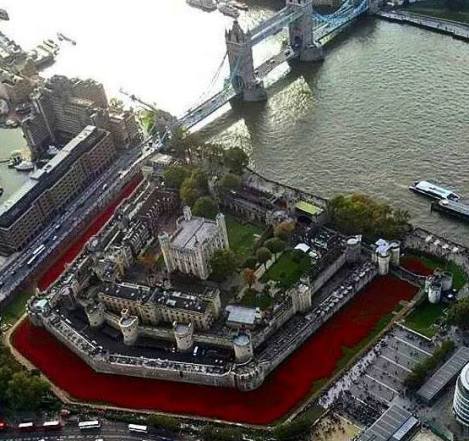 Aerial view of Blood Swept Lands and Seas of Red

Seeing it all finished now just shows the scale of the sacrifice.
–  Bradley White, injured British veteran of Iraq and Afghanistan

Aerial views of the Tower of London’s moat filled with 888,246 poppies help us grasp the magnitude of the lives lost and futures sacrificed.  PBS calculates there were 37,466,904 military casualties in WWI:

Ironically, the number of dead in WWI equals the total population of London.

This is the true, staggering cost of war.