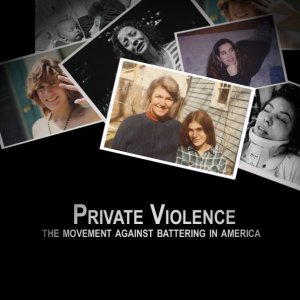 It is our job as advocates to meet the needs of
the women who walk through our doors.
– Kit Gruelle, domestic violence advocate

What an amazing concept!  I will confess that I cried when I witnessed a woman being tightly embraced after she had been protected from further abuse by dedicated domestic violence advocates in Private Violence.  We’ve all been terrified, but too few of us have ever been embraced or protected.

Too many of us have instead heard a laundry list of excuses from people who are being paid to protect us but who would prefer to rub shoulders with and raise money from the Junior League set.  Last week someone dubbed them “Junior Leaguers,” and I wondered if these advocates-in-name-only ever realize many of these wealthy women don’t write hefty checks because they too didn’t get the help they desperately needed. 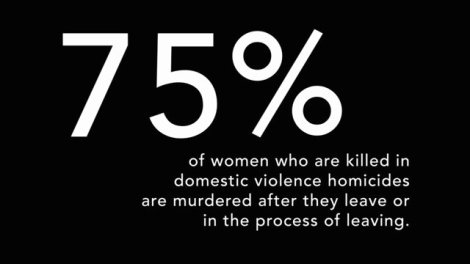 Domestic violence homicides are the only predictable homicides.
– Kit Gruelle

Private Violence chronicles and showcases effective advocacy.  Deanna Walters had left her abusive husband Robbie.  While celebrating Halloween as a family in 2008, he was consumed with jealousy.  He kidnapped Deanna and their daughter Martina and forced them to join him on a cross-country trip in his 18-wheeler from North Carolina to California.

From sea to shining sea for six days, Robbie beat Deanna to force her to confess to romantic relationships which existed solely in his mind.  His truck was stopped in Oklahoma.  Deanna was detained, and Robbie was free to continue driving back to North Carolina. 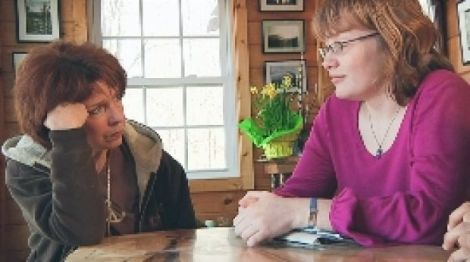 The domestic violence experience does not represent
a character flaw in the women.
We need to hold men accountable.
– Kit Gruelle

It takes a village to protect women from abuse and to hold domestic violence perpetrators accountable.  Fortunately, a registered nurse in an Oklahoma hospital who treated Deanna’s injuries took photos.  These photos were critical and essential evidence.

Deanna and Kit at the shelter

Physical violence is a punctuation mark.
It comes out after the emotional abuse and intimidation
are no longer effective.
– Kit Gruelle

The “justice” system piled on excuses for failing to prosecute Robbie:  it didn’t happen in our jurisdiction; the injuries weren’t serious enough; why didn’t she just leave?

Deanna’s advocate Stacy Cox persevered despite tremendous obstacles.  The challenges are condensed into a gripping scene of Ms. Gruelle discussing the case with a friendly prosecutor who had the audacity to suggest they contact the FBI to pursue federal charges for kidnapping and Violence Against Women Act (VAWA) crimes.  Who knew?  I didn’t.

After nine months of intense lobbying by Ms. Cox with local law enforcement, the prosecutor’s office, the FBI, U.S. Attorney’s office, and the NC Coaliltion, the FBI finally agreed to file charges and local law enforcement piled on the band wagon.  Robbie was ultimately convicted along with his co-conspirator cousin.  They are currently doing hard time in federal prison.  Robbie was sentenced to 21 years ~ mostly for kidnapping rather than domestic violence.  His cousin was sentenced to five years.

She is told systemically that she has no value.
Our job as advocates is to build her back up.
– Kit Gruelle

Private Violence also visits advocacy on behalf of an abused woman in jail for murdering her abusive husband as well as a horrifying tape of a prominent physician threatening his wife.  His intimidating voice will sound very familiar to many abuse survivors.

On a lighter note, Ms. Gruelle skewers one of her college professors who had arrogantly proclaimed that professional men (judges, doctors, lawyers, pastors, etc.) don’t engage in domestic violence.  Her beloved dog Luna steals the movie as she comforts survivors at the shelter and in Ms. Gruelle’s log cabin.

I rejoiced at the end to learn that Deanna is close to finishing college.  She and Martina are finally safe in their own home. 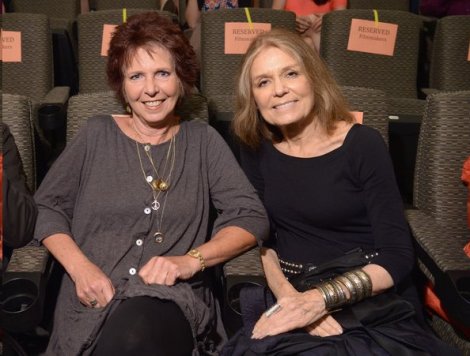 I sometimes refer to restraining orders as a last will and testament.
There’s probably 45 or 50 orders here, and
every single one of the women who went to obtain
these orders of protection was murdered
in precisely the ways that they said they would be.
– Kit Gruelle, Private Violence

Ms. Gruelle is a domestic violence survivor who has invested 25 years of her life to protecting other women and children. Her late ex-husband Jack was a Marine who threatened to hunt her down and kill her if she left. She survived by periodically disappearing with the children. His accidental death set her free. 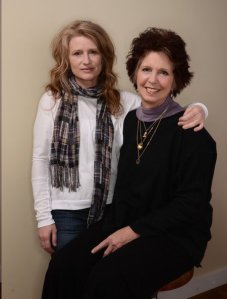 We all know the victim’s story.
We haven’t seen it from an advocate’s perspective.
It was a war zone.
Where do you focus?
– Cynthia Hill

Private Violence began six years ago as a collaboration between Ms. Gruelle and documentary film producer Cynthia Hill, who witnessed her own mother’s abuse.  Their executive producers included Gloria Steinem and Cindy Waitt, who are very invested in the issue because they too witnessed abuse.  Each contributed her unique talents to make a dent in the universe.  Private Violence won a Sundance Award and was picked up by HBO.  It will premiere on October 20 at 9 PM.

It is a brilliant and sensitive film which you won’t forget.  I hope y’all will watch and share it with the advocates who are being paid to help you.  Show them effective advocacy. 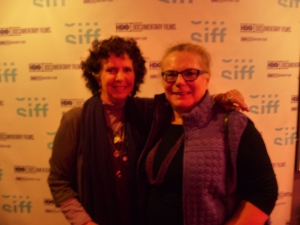 Ms. Gruelle and I got to spend a relaxing hour together touring West Seattle before HBO’s private screening of Private Violence at the SIFF in Seattle. 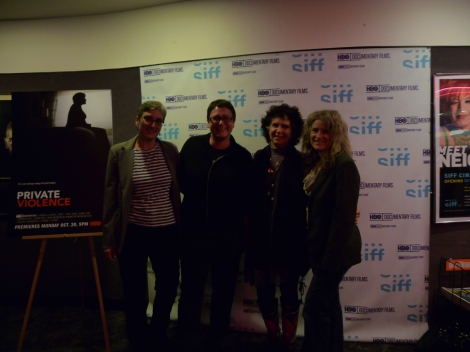 After the screening, Merril Cousin, the Executive Director of the King County Coalition, Ms. Gruelle, and Ms. Hill held a panel discussion for the audience.  Most people wanted to know how domestic violence could be prevented and what they could do to achieve this objective.

Ms. Gruelle grits her teeth when society holds domestic violence survivors and victims accountable rather than perpetrators.  She shared an analogy which I believe will resonate with most of you:

Let’s assume a bank has been robbed four times.  Nobody dares to ask the bank president why they continue to keep money there or don’t move.

In a Portrait of Violence, an Appeal for Reform: ‘Private Violence,’ an HBO Documentary on Domestic Abuse by by Neil Genzlinger, New York Times, 10/19/14

LET’S NOT FORGET TEEN DATING VIOLENCE AS WE TALK ABOUT BULLYING by Cindy Waitt, 6/21/12

Gloria Steinem Speaks Out About Domestic Violence At A Screening Of HBO Documentary ‘Private Violence’ by Emma Gray, HuffPost Women, 9/30/14