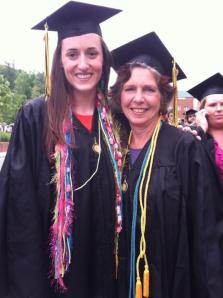 Kit Gruelle (R) at her graduation

She is now free to focus on the completion of her documentary Private Violence which answers the question that makes so many survivors’ teeth clench:  “Why doesn’t she just leave?”

We have extraordinary footage of everyone from policy makers to historians to activists, including our executive producer, Gloria Steinem, and Vice President Joe Biden. But the documentary centers on stories of domestic violence survivors, their families, and advocates.  Featured in the film is Deanna Walters, a young woman I met in an advocacy training session I facilitated in Western N.C. Deanna told her story for the first time to the women gathered there. She described her kidnapping and beating by her estranged husband Robbie in the cab of his 18-wheeler, in front of their three-year old daughter Martina. An Oklahoma cop who stopped them said of Deanna, “I had never seen anyone in that bad of shape. I truly believe that if I hadn’t stopped them, she’d be dead.” Deanna’s transformation from victim to survivor is at the heart of the film. 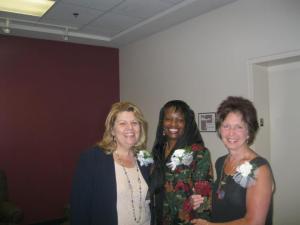 The premiere will be in October (National Domestic Violence Awareness Month) IF Ms. Gruelle can raise $15,000 to complete it.  My dear friend and colleague Julie Owens has asked for my help to raise this money.  I have agreed because I think every executive director of every shelter should be required to watch Private Violence to see what effective advocacy looks like.

Almost 500 people from over 155 countries read this blog every day.  Y’all must be learning something or getting inspired by what I’ve written.  If so, I want you to make a donation in my name to Private Violence.  Then, I want you to leave a comment here to brag that you are part of Eve Ensler’s One Billion Rising ~ people around the world who are demanding an end to the violence against women and girls.

Yesterday I marked the 20th anniversary of surviving domestic violence.