Facebook has exploded with creativity and humor.  My favorite videos:

Gov. Romney has hung himself with his own rope, and he’s fired up the 99% to campaign and vote for Pres. Obama’s re-election.

Pain en masse for the middle class if they pass their budget.
But great care for the millionaire and the billionaire when they share in big tax cuts.
When they meet to prepare ways to end Medicare, that’s amore.
When ol’ Willard goes nuts for the congressman’s cuts, they’re in love.
– “Mitt Romney & Paul Ryan:  That’s Amore”

Rep. Ryan is the spawn of Donald Rumsfeld and Dick Cheney, and he’s twice as evil.  Rep. Ryan is a policy wonk who is the darling of the conservative think tank the Heritage Foundation.  They are the folks who promote the Romney Hood philosophy ~ rob from the poor and give to the rich.  They spin 1% ideals and manipulate voters with their 4G (guns, God, gays, and gynecology) agenda into voting against their best interests. 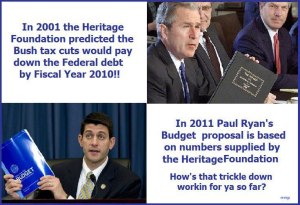 Romney/Ryan:  Free ride for the rich,
all the rest of us into the ditch.

Romney/Ryan are a couple of spoiled rich white guys are so arrogant that they’ve forgotten that the 1% might fund campaigns, but the other 99% still have the vote. 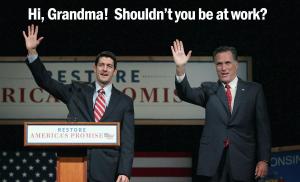 Rep. Ryan wants to throw everyone who isn’t in the 1% under the bus.  He thinks granny ought to get herself a job.  Welfare benefits should only be for the idle rich.  Nobody told him that the largest voting block is senior women.

I have been very concerned that the young voters who elected Pres. Obama might be so disenchanted with how long it takes to turn an economy around after a Bush presidency that they wouldn’t register and vote in 2012.  Mr. Romney’s greatest gift to the Obama campaign is that granny has a lot of reasons to make sure her grandkids vote.

Rep. Ryan wants to gut Medicare and Medicaid.  He thinks Social Security is a Ponzi scheme that should be managed by Wall Street criminals like Bernie Madoff who made off with a lot of retirement funds.

Gov. Romney (LDS) and Rep. Ryan (Catholic) belong to churches that steadfastly refuse to allow women in leadership positions.  They believe women should be barefoot and pregnant.

They stridently believe in the right to life until after an unwanted fetus is born.  They don’t want to fund welfare or education for poor and middle-class families.

They want to compel all women to adhere to their misogynistic, religious views on women’s reproductive health.  Essentially, women and brood mares have the same value.  Gov. Romney so values his stallion’s sperm that he claimed it as a tax deduction.

Romney/Ryan want to jettison ObamaCares ~ including the provisions that mandate screening for domestic violence.  The mandate will ultimately transition domestic violence from the dysfunctional criminal “justice” system to the more preventive treatment pathways of medical care.

Did your daddy leave you a fortune?  Are you on the Forbes billionaire list?  If not, you’re in the 99%.  The Romney/Ryan ticket isn’t going to govern for you.  So, you’d better get yourself registered to vote and vote for President Obama.