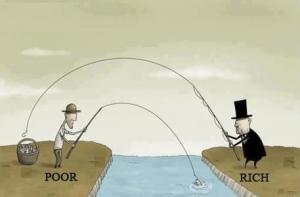 Republicans have a contempt for welfare recipients.  Yet, we rarely hear them bitch about welfare for the rich:  the pork in the federal budget that handsomely rewards rich people for doing absolutely nothing.

Sen. Harry Reid (D-Nev), who is a Mormon, courageously suggested why Mitt Romney steadfastly refuses to follow in his father’s footsteps in releasing his tax returns.  He told HuffPost that a Bain investor said Mitt Romney hasn’t paid taxes for 10 years!

In some respects, this makes sense. Mitt Romney has been unemployed for several years. Yet, he’s made millions.

How does a guy who doesn’t work make millions?  It is called “passive” income.  He didn’t earn the money.  The money was earned by people who didn’t actually get to take it home ~ many of whom may not take home a living wage.  Their skinny wages and non-existent fringe benefit packages enabled their employers to amass huge profits which ended up in Mitt Romney’s pockets.  He made millions, but he didn’t earn a dime of it.

Earned income is the money in your paycheck ~ your hourly wage or annual salary.   Republicans bitch about unions because they’d really like to pay you minimum wage and jettison your benefit package.  If they can get rid of unions, there’s nothing to stop them.

Waste Management workers are out on strike here in Seattle.  Their public relations people are whining about the $100,000 compensation package garbage haulers receive.  This is designed to irritate the folks whose garbage isn’t getting picked up and who make substantially less money.

Does your average garbage hauler actually take home $100,000/year?  Hell, no!  Most make less than $50,000 with overtime.  The $100,000 figure is the mythical total compensation package of the garbage hauler with the most seniority ~ the guy at the top of the proverbial heap.  It likely includes the Social Security contributions and workers’ compensation premiums Waste Management is required by law to pay; health insurance premiums, vacation and sick pay, pension contributions, etc.  In other words, it includes a lot of money the hauler may never see ~ money the company gets to write off on their tax returns as a salary expense.

If you aren’t in the 1%, Mitt Romney isn’t going to lift a finger to improve the quality of your life or your bank account.  In fact, he’s going to work overtime to bust the unions which is an economic policy that will ultimately trickle down to you in the form of lost job security, lower wages, and fewer fringe benefits.