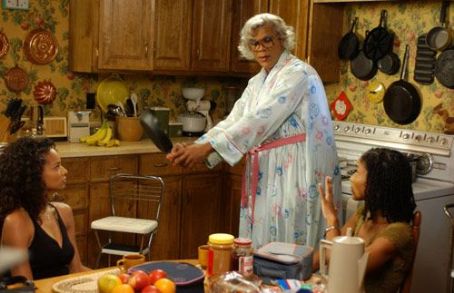 Tyler Perry as Madea with her cast-iron skillet

Y’all know I’m a huge Tyler Perry fan.  Through his iconic character Madea, he is trying to teach women to become emPOWERed ~ to stand tall for ourselves ~ to develop an AT-tit-TUDE.  In this classic photo, she’s got her cast-iron skillet out to teach her granddaughters how to say, “hell to the NO!”

If you don’t believe there’s a War on Women going on, I want you to unsubscribe right now.  We aren’t going to be getting along in the next few months.  Ditto for anybody who doesn’t have enough sense to find out where a candidate stands ~ not what they say ~ what they DO ~ on the issue of violence against women and children.  Double ditto for anybody who isn’t registered to vote.  Triple ditto for those of you who don’t vote. 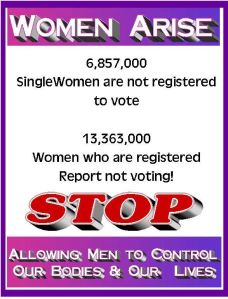 Do not even think of whining about your own fate if you aren’t personally doing your part to ensure that democracy means that we women have an equal right to life, liberty, and the pursuit of happiness.  Old broads like me are getting ready to retire, and we won’t be carrying the load for you anymore.

It is abundantly obvious that we women need to launch a Madea-styled “hell to the NO!” campaign.  The statistics that we see say that 25% of women have experienced domestic violence.  The reality according to Group Health is more like 44%; other research indicates it could be as high as 54%.  It’s time for us to stop being silently pissed off ~ bitching to our Facebook friends ~ hoping somebody else will bring about change.  It is time for us to yell “hell to the NO!” in forums where change happens.

We are one of the largest voting blocks in the country, yet we haven’t done shit to exercise our political power.  It’s time to get off our butts and demand change.