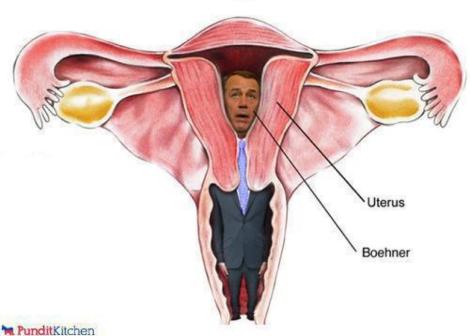 Legislation promulgated to restrict female employees’ access to contraceptives by grumpy old farts intent on obfuscating sexual perversion under the cloak of religious dogma and on placating their sense of impotence raises concerns that said legislation may not pass judicial muster under federal EEO laws and the Equal Protection clause of the 14th Amendment of the U.S. Constitution.

To achieve parity, legislation must include a requirement that all male employees requesting reimbursement for Viagra and Cialis shall have to drop their trousers before a panel of female HR executives to prove that their erectile dysfunction is due to medical issues rather than an inability to attract a hot chick because they are too perverted and creepy to be deemed sexy.

All legislation that defines sexy, hot chicks as “sluts” must contain a corresponding definition of “pervert” for the grumpy old men who think my sex drive, reproductive organs, and body are any of their damned business.

In a nutshell, a War on Women isn’t a good foreplay or election strategy.

I am WOMAN.  I vote.  Keep it up, and you’ll hear me ROAR in November!  And, yes all those bad puns were very much intended.  The legal advice might be sarcastic, but it is also fairly spot-on accurate.  Just saying. . .