Supermodel Beverly Johnson, one of Oprah’s Legends in 2006, announced today on Oprah that her new mission is to become a voice for survivors of domestic violence:

I am a victim of domestic violence.  I just think we’ve become so desensitized towards women being beaten and abused and murdered that everybody just thinks it’s okay, and it’s not.

Oprah appeared to be shocked by the revelation which didn’t get much press except in the tabloids.  Mark Anthony Burk’s conviction for domestic violence in January 2009 didn’t hit the tabloids until he leveraged it into “Pipe Dreams” on the Golf Channel about being homeless after Ms. Johnson kicked him to the curb.

I don’t think these domestic violence issues are a first for Mr. Burk.  He was the subject of multiple restraining orders in Los Angeles dating back to 2004.  I have written to the Golf Channel saying this isn’t just a case of someone’s life suddenly taking a bad turn, which is how they’re trying to depict it. 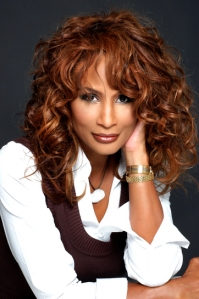 Mr. Burk had the audacity to sue Ms. Johnson for $5 million in palimony.  Her publicist released a statement:

It is our understanding that Mr. Burk has been convicted of making terrorist threats against Ms. Johnson and is presently serving that sentence.  We also understand that since his conviction, he has been found in contempt on three different counts of willfully violating probation.  Ms. Johnson is in fear for her safety, but she’s actively working with law enforcement to resolve this situation.

Ms. Johnson was a championship swimmer in college and aspired to be an attorney.  However, when she learned how lucrative a career as a model could be, she boldly approached the editors of Glamour.  They featured her on their cover in 1971, but it was her historic Vogue cover in August, 1974 that propelled her into the international spotlight.  She has since graced the covers of over 500 magazines.  She told the Los Angeles Times:

When the magazine came out I had no idea at all that I was the first black woman to be on the cover of Vogue.  I was just overjoyed to be on the cover because that’s what you strive for as a model.  That’s when you know you have arrived.

She was so excited to learn from her agent that she had made the cover that she raced to the local news kiosk without change to buy the magazine:

I told the guy at the kiosk, “It’s me on the cover, I live right down the street, I promise you I’ll bring you the money!”  And he said “no.”

A few weeks later, the significance of being the first Black model to grace the cover of Vogue sank in:

I felt angry at first ~ like, why hadn’t a black woman appeared on the cover of Vogue already?  As a woman of color in America, I had heard about prejudice, but I didn’t know the depth and the breadth of it.  And then I felt a profound sense of responsibility.  I grew up, that’s what I did.  Overnight, I became an adult.

Ms. Johnson was born on October 13, 1952 in Buffalo, NY.   She is a singer, actor, published author, celebrity judge, and owner of Beverly Johnson Hair Collection.  Her daughter, Anansa Sims, is also a model.   The mother-daughter models are getting ready for Ms. Sims wedding in the next photo.

Ms. Johnson is also a very talented golfer ~ with a 14 handicap.  She lives on the PGA West golf course in LaQuinta, CA.   In this next photo, she is greeting guests at her 12 foot front door: 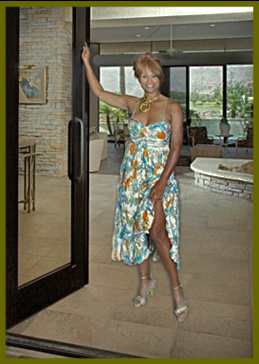