She’s beautiful, talented, and brilliant.  She was Miss Washington in 2007 and second runner-up in the 2008 Miss America pageant.  When little girls think of beauty queens, they never imagine those beautiful women are getting beaten up at home by their boyfriends.

Elyse Umemoto’s platform during her reign was “Embracing Diversity, Empowering Women.”  She calls herself an ethnic “quad” because she is a Native American from the Yakama tribe, German, Hispanic, and Japanese.  In the spotlight, she advocated for empowerment.  At home, she experienced an escalating pattern of domestic violence from 2007 until February 8, 2008.  She told reporter Adriana Janovich at the Yakima Herald:

I went from being a passionate advocate to a victim, quite literally a statistic.  One in four women will be a victim of domestic violence in her lifetime.

Mike Miller, a pageant official who went with Ms. Umemoto to the Pierce County court house in Tacoma, WA to get a protection order, said: 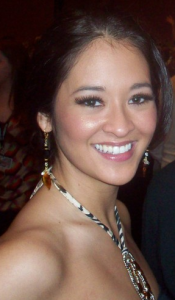 Her boyfriend pleaded guilty and was sentenced to 240 hours of community service and two years probation.  Ms. Umemoto believes he continues to stalk her:

I don’t want to live my life in fear, but at the same time, you have to be cautious.

Ms. Janovich’s article was picked up by the wire service AP and widely reported in area newspapers and on television stations.  I was curious that my extensive Google search didn’t pop up an article from the newspaper in Tacoma.  Frequent visitors to this web site know I’m rabid about the murder of Crystal Judson Brame by her estranged husband David, who was chief of police in Tacoma.

It took investigative journalism at the Seattle Post-Intelligencer to ferret out Brame’s abuse of power and his wife and the rampant corruption in Tacoma.  The Tacoma News Tribune, on the other hand, played lap dog to the the corruption which allowed their police chief to engage in domestic violence with impunity.  The editors bristle when someone like me reminds them of their First Amendment obligations.

I was shocked that they didn’t send a reporter to cover this high-profile domestic violence case in Tacoma.  They merely picked up Ms. Janovich’s  story from AP.

But, I was absolutely blown away that they didn’t use the photo of Mr. Miller and Ms. Umemoto from her story like all the other media outlets.  Instead, the editors of the Tacoma News Tribune searched far and wide to find this extraordinarily obscure and highly suggestive photo to post on their web site:

Their editorial decision to use the bikini photo with red lights tells me a lot about the Tacoma paper’s attitude toward women who experience domestic violence and why the paper played lap dog to Police Chief David Brame while he abused his wife Crystal.  It tells me they think women deserve to be beaten into submission.