CNN is reporting as I write that 53 people were gunned down during shooting rampages during the last month.

And, folks are still claiming he “snapped.”  Wake-up, people!  Wake-up!

And, Oprah, the mother of those five kids in Graham, Washington, did leave.  Now,all her kids are dead because her estranged husband couldn’t handle the fact that she left him.  Most of the kids were murdered while they slept, but one of the daughters fought for her life.  Yes, there was a history of abuse.

Since my last post about shooting rampages, there have been three more.  Only one did not involve domestic violence.

Three police officers were gunned down when they responded to a domestic violence call in Pittsburg.  A mother fed up with her son’s dog urinating on the floor threatened to evict him from her home.

What do these rampages have in common?  The shooter had an arsenal of weapons and a cache of ammunition.  Each was planned.  Some shooters wore survival gear. What else did they have in common?  All the shooters were experiencing the impotence of rejection.  Like a volcano about to erupt, there was ample warning the roiling and boiling going on beneath the surface would soon explode.

We’re living in frustrating times.  Millions of people are feeling overwhelmed.  Throughout history, people have responded to feelings of oppression by revolting with guns.  We wait for Congress to pass gun control legislation without realizing we have the power to control the guns that come into our homes.

In many areas of the country, it is heresy to suggest it is time to get guns out of our homes. But, I want y’all to take a very close look at statistics from the US Department of Justice.  The evidence is overwhelming.  We tell ourselves we have those guns in our homes to protect our families against the unlikely event an intruder will murder us with a gun (14%). 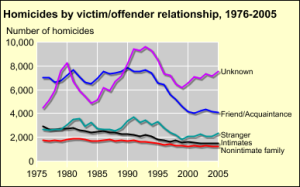 I started wondering about this when the judge pulled a loaded gun out of the nightstand, pointed it at my head, and said, “I can kill you and get away with it.”

He wasn’t kidding, folks. I called the sheriff’s office and asked if I could bring his arsenal of guns to them for safekeeping.  No.  I would be arrested for theft.   So, I hid the guns in the linen closet.  I knew he’d never look there.  Yes, he was livid.  He went into a purple rage.  But, I knew I was safer with those guns well hidden.

With time and distance, I have come to appreciate that guns give men who feel impotent a sense of power and a feeling they are in control.  My hunch was confirmed today by a law professor who has done extensive research on the issue.  I’ve heard a million excuses as to why we need aresenals of guns in our homes.  We’ve heard them so often that we almost believe them.  But, the bottom line is that those guns are around because somebody at some point in his or her life wants to kill something. Will it be you?

Update:  On December 14, 2012, Adam Lanza shot his mother Nancy with her own gun before taking her guns to Shady Hook elementary school in Newtown, CT where his mother taught kindergarten.  It was one of the nation’s worst shooting rampages.

Analysis:  What Do Many Mass Shooters Have In Common?  A History of Domestic Violence  Take Violence Against Women Seriously.  It’s a red flag. by Nancy Leong, Washington Post, 6/15/2017