Donald J. Trump believes Deputy National Security Adviser Dr. Victoria Coates wrote A Warning by Anonymous. She was reassigned to the Energy Department this week as part of his post-impeachment sweep.

Update:  On October 28, 2020, Miles Taylor revealed he is the author.  Mr. Taylor, who was was chief of staff to Department of Homeland Security Secretary Kirstjen Nielsen explained:

I witnessed Trump’s inability to do his job over the course of two-and-a-half years inside the administration.  Everyone saw it, though most were hesitant to speak up for fear of reprisals. . .The country cannot rely on well-intentioned, unelected bureaucrats around the President to steer him toward what’s right  He has purged most of them anyway.

While much of the book is a rehash of news we all know and arrogant rants by the author, it provides the most sober, clear-eyed assessment of Trump that I’ve read.

He’s comfortable being
a huckster of half-truths.
– A Warning

The “warning” is that Trump is a tyrannical leader with authoritarian tendencies. We all need to stop chalking up his bizarre actions to ignorance. He knows exactly what he’s doing: he’s installing himself as our nation’s first dictator. He doesn’t give a damn for the Constitution, separation of powers, or the rule of law:

. . .chaos is a deliberate governing strategy. . .

The obstruction is part of a deliberate and coordinated campaign. . .a concerted attempt to fend off congressional oversight.

His paranoia is the best evidence of a guilty conscience.
– A Warning

He bullies people into submission and extracts revenge against those who get in his way:

Trump is adept at identifying anyone with an independent streak who might challenge him. . .He ejected people who were willing to stand up to him.

. . .[his] penchant for using his position to mock, bully, berate, and punish. . .criticism is treasonous. . .his vices are more alarming than amusing. . .

The nation’s chief executive should never under any circumstances use his office and its extraordinary powers to seek revenge against whistleblowers and political opponents.  These are actions we would expect from tin-pot dictators in repressive countries.

. . .there’s no better evidence of the danger he poses than his own conduct.

If you don’t have time to read the book, these are the author’s most dire warnings:

The explanation that he wanted to help combat “corruption” in Ukraine was barely believable. . .The obvious corruption was in the Oval Office. . .Donald J. Trump will seek to abuse any power he is given. . .No external force can ameliorate his attraction to wrongdoing. 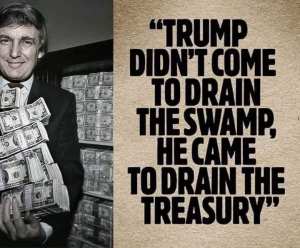 The point is that you can’t be too greedy.
– Donald J. Trump

Donald Trump has America back on the road to bankruptcy, an area where he has unparalleled expertise. . .What does he care if the federal government goes belly-up?  By then it won’t be his problem. . .

The net effect of the president’s war on democratic institutions is that he has turned the government of the United States into one of his companies:  a badly managed enterprise defined by a sociopathic personality in the c-suite, rife with infighting, embroiled in lawsuits, falling deeper into debt, allergic to internal and external criticism, open to shady side deals, operating with limited oversight, and servicing its self-absorbed owner at the expense of its customers. . .

Why is the president so attracted to autocrats?  The president sees in these guys what he wishes he had:  total power, no term limits, enforced popularity, and the ability to silence critics for good.

. . .that’s how you know Donald Trump is not joking ~ when he sends someone out to say that he was joking.

It doesn’t appear that anyone in DC or in the press is able to stop him.  Why?

. . .Trump is indifferent to the reasons why presidents shouldn’t abuse their power for personal gain. . .He has few guardrails left.

Reelection will convince him
he is freer than ever
to put his self-interest above the national interest.
– A Warning

It is up to We the People to preserve democracy. On Super Tuesday, we’ll discover whether Democrats have the good sense to nominate someone who will defeat him in November.

Our democracy is on the line.

2 responses to “Book Review: A Warning by Anonymous”