I’ve had some measure of success.
It’s because mentors, people who helped show me the path
and took an interest. . .
I know the value of being pulled out of one environment into another.
– Billy G. Hudson, Ph.D.
If you or someone you know has diabetes or kidney disease, you owe a debt of gratitude to Robert Theus.  He was a history teacher and basketball coach at the high school in Grapevine, Arkansas.  When Billy G. Hudson decided to escape his father’s beatings by dropping out of school and working on a cotton farm, Mr. Theus took him to Henderson State Teachers College.
Dietitian Alice Sloan found him jobs so that he could pay his way through school.  Chemistry Professor Haskell Jones cultivated his interest in science.  Dr. Hudson received his bachelor’s degree in 1962.  He earned a master’s from the University of Tennessee in 1963 and was invited by his mentor Dr. Robert Barker to go to the University of Iowa.  Dr. Hudson received a Ph.D. in biochemistry in 1966 and joined the Army during the Vietnam War.  He worked to improve filtration membranes for kidney dialysis machines at the Army Research Institute of Environmental Medicine near Boston.  At Harvard Medical School, he worked with Dr. Robert Spiro on research on diabetic kidneys.
Dr. Hudson is now an internationally renowned kidney specialist.  He has started two biotech companies, established the Center for Matrix Biology at Vanderbilt University, won the American Society of Nephrology’s highest honor, and founded the Aspirnaut Initiative.  Wow!  That’s a long way from the abuse, poverty, and the red clay of Garden Seed Road in Grapevine.

21st Century’s One-room Schoolhouse
Aspirnaut Initiative:  Aspire, Seek, Achieve
When Dr. Hudson went back to Grapevine, he rode a school bus and discovered that kids were wasting three hours each day riding bus #46 to and from school in Sheridan.  He called their parents and grandparents together and introduced the Aspirnaut Initiative.  His idea was to give high-achieving students laptops and iPods so they could study math and science on the bus.
He and his second wife Julie, a professor of Clinical Anesthesiology and Pediatrics at Vanderbilt, provided the initial funding of $70,000 and raised another $70,000 from friends in 2007. 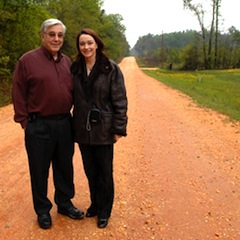 We understand the plight of rural youth, having walked a mile in their shoes.

Grapevine to Vanderbilt
In 2009, Aspirnaut students spent eight weeks at Vanderbilt with Dr. Hudson doing group and independent scientific research.  They found a new chemical bond in biological tissue:
Every tissue in your body has this bond.  It is the “glue” that helps hold together the building-block molecules of collagen networks that underlie cells and provide structural integrity to all tissues.
In 2010, students were able to participate in Vanderbilt experiments via remote technology.  Today, 200 students in two states are in Aspirnaut. 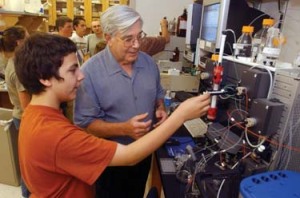 Mr. Theus didn’t just pave the way for Dr. Hudson.  His siblings followed his path from Grapevine to professional acclaim.  His sister Ann Kincl is an expert in gifted education, and his brother Johnny Hudson is a Managing Partner at Hudson, Cisne & Co. LLP.  Not bad for a trio of abused kids who grew up tending chickens and picking cotton without running water or electricity or decent secondary education, eh?

They survived.  They are thriving and have found joy.